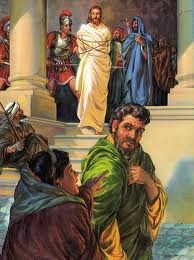 Determined to be a follower of Jesus

Jesus’ first words to Simon Peter were “Come, be my disciple” (Mark 1:17). His last words to him were “You follow me” (John 21:22). Every step of the way between those two challenges, Peter never failed to follow—even though he often stumbled. It is better to be a follower who sometimes fails than one who fails to follow.

Like Peter, we may start off wanting to follow Jesus as a disciple but give up along the way when we encounter difficulties. (Here I am not talking about salvation, which is a free gift, but about discipleship – following Jesus in character and deed – which has a high cost.) But Peter did not give up. He would not have made such an impact through the centuries if he had given up.

Besides Jesus, all of us are doomed to fail in our Christian life, as we are imperfect human beings. The important thing is to follow the example of Peter. He failed miserably and denied Jesus three times. Yet he picked himself up and later went on to strengthen his other brethren. That’s a fantastic comeback!

Denied that he knew Jesus

Matthew 26:33Peter declared, “Even if everyone else deserts you, I never will.” 34″Peter,” Jesus replied, “the truth is, this very night, before the rooster crows, you will deny me three times.”

We often condemn Peter for denying Jesus three times even though he was so close to Jesus. Yet we do the same in our lives every time we do not acknowledge God or are ashamed of Him. Some of us may be shy to let people know that we are Christians. We may be shy to talk about God to other people. Jesus tells us the consequence of such behavior.

Do you find it difficult to talk about God to your friends and colleagues? Ask God to give you the boldness and start sharing God with others.

Succumbed to pressure from the legalists and added conditions to faith

Gal 2:11  But when Peter came to Antioch, I had to oppose him publicly, speaking strongly against what he was doing, for it was very wrong. 12When he first arrived, he ate with the Gentile Christians, who don’t bother with circumcision. But afterward, when some Jewish friends of James came, Peter wouldn’t eat with the Gentiles anymore because he was afraid of what these legalists would say…14When I saw that they were not following the truth of the Good News, I said to Peter in front of all the others….16And yet we Jewish Christians know that we become right with God, not by doing what the law commands, but by faith in Jesus Christ. So we have believed in Christ Jesus, that we might be accepted by God because of our faith in Christ—and not because we have obeyed the law. For no one will ever be saved by obeying the law.”

It is hard to imagine but even Peter, who was so close to Jesus, succumbed to erroneous belief that one has to observe the Jewish law before one can be saved. The message of salvation is really too simple for some to accept. How can I be saved from eternal damnation simply by faith? This does not make sense to many people but it is indeed the message of the gospel brought to us by Jesus. What do we tell people when they want to become Christians? Simply that they must have faith in Jesus. Not that they have to go to church every Sunday and be baptized. Those are requirements of discipleship, not salvation. Unless we make the salvation story what it actually is – free – we will be repelling people away from salvation for wrong reasons.