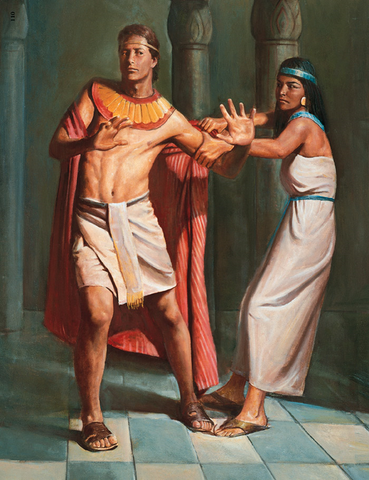 Not tactful in dealing with others.

Genesis 37:5  One night Joseph had a dream and promptly reported the details to his brothers, causing them to hate him even more. 6  “Listen to this dream,” he announced. 7″We were out in the field tying up bundles of grain. My bundle stood up, and then your bundles all gathered around and bowed low before it!” 8″So you are going to be our king, are you?” his brothers taunted. And they hated him all the more for his dream and what he had said.

Joseph, in his younger days, was totally tactless. He went ahead to say things that would normally offend the hearer. In this particular occasion, it offended his hearers so much that even his own brothers wanted to kill him.

Before we tell a person off, ask God to show you a better way to say it.

Was able to withstand sin because he remembered God’s goodness.

Gen 39:8  But Joseph refused. “Look,” he told her, “my master trusts me with everything in his entire household. 9  No one here has more authority than I do! He has held back nothing from me except you, because you are his wife. How could I ever do such a wicked thing? It would be a great sin against God.”

We have to realize that sin hurts God because God loves us and knows that sin is doing us damage. Do we want to hurt the God who loves us and has redeemed us? The next time we are tempted to sin, contemplate on the good that you have received from God and determine not to hurt God by your sin.

(Eph 4:30-31 NIV)  And do not grieve the Holy Spirit of God, with whom you were sealed for the day of redemption. {31} Get rid of all bitterness, rage and anger, brawling and slander, along with every form of malice.

Ran away from temptation.

One sure way to avoid falling into temptation is simply to avoid it. Joseph physically ran away from the danger zone. Had he stayed back, he may not have been able to stop her advances. We can learn to do the same. We can avoid magazines and movies that stir up sexual thoughts. We can avoid going out with friends that encourage us to sin.

Gen 39:11One day, however, no one else was around when he was doing his work inside the house. 12She came and grabbed him by his shirt, demanding, “Sleep with me!” Joseph tore himself away, but as he did, his shirt came off. She was left holding it as he ran from the house.

Genesis 41:15  “I had a dream last night,” Pharaoh told him, “and none of these men can tell me what it means. But I have heard that you can interpret dreams, and that is why I have called for you.” 16  “It is beyond my power to do this,” Joseph replied. “But God will tell you what it means and will set you at ease.”

Even though everyone Joseph met thinks that he is great, he was not proud. He knew the source of his greatness was God and he did not waste any opportunity to give God the greatness.

Have you been able to impress others with skills that God has given you? Each time that happens, do you feel you are great or do you thank God and use the opportunity to praise Him?

Very few people could say that they have endured as much suffering as Joseph. He was betrayed and deserted by his family, exposed to sexual temptation, and punished for doing the right thing; he endured a long imprisonment and was forgotten by those he helped. As you read his story, note that Joseph was never bitter at any time. His positive response transformed each setback into a step forward. For example, when he was in the prison, if he had sunk into bitter despair, he would not have had the favor of the jailer and put in charged of the prison affairs.

Joseph’s attitude was simple. He didn’t spend much time asking why. He did not ask why because he trusted in God and know that God is still in control and will always keep His promise. Even in his deathbed, Joseph demonstrates confidence in God.

Heb 11:22  And it was by faith that Joseph, when he was about to die, confidently spoke of God’s bringing the people of Israel out of Egypt. He was so sure of it that he commanded them to carry his bones with them when they left!

Instead of asking “Why?” his approach was “What shall I do now?” He did his best whatever the circumstances he is in. What matters is not so much the events or circumstances of life, but your response to them. With God’s help, any situation can be used for good, even when others intend it for evil.

Are you undergoing some difficulties? Are you still trusting that God is in control and wants only good for you? Then, do you best in the situation and leave the rest to God.