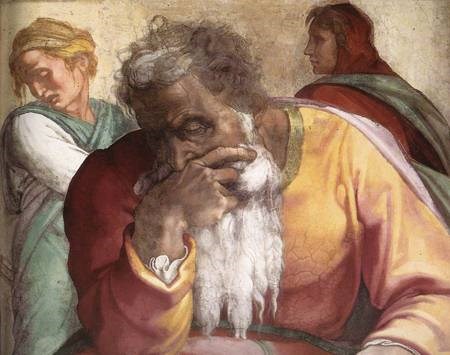 A prophet who endured

Endurance is not a common quality. Many people lack the long-term commitment, caring, and willingness that are vital to sticking with a task against all odds. But Jeremiah was a prophet who endured. Jeremiah had to depend on God’s love as he developed endurance. His audiences were usually antagonistic or apathetic to his messages. He was ignored; his life was often threatened.

Jeremiah 11: 21 The men of Anathoth wanted me dead. They said they would kill me if I did not stop speaking in the Lord’s name.

Jeremiah preached the gospel even though his life has been threatened. The motivation is clear. He loves his people so much. We know this because Jeremiah is constantly weeping for his people, earning him the name “Weeping Prophet”.

Jeremiah 8:18  My grief is beyond healing; my heart is broken. 19  Listen to the weeping of my people; it can be heard all across the land. “Has the Lord abandoned Jerusalem?” the people ask. “Is her King no longer there?”

A prophet who wept for his people

Jeremiah wrote two Old Testament books, Jeremiah and Lamentations. He was so deeply sorrowful for the fallen condition of Judah that he earned the title “Weeping Prophet”.

With the exception of the good king Josiah, Jeremiah watched king after king ignore his warnings and lead the people away from God. He saw fellow prophets murdered. He himself was severely persecuted. Finally, he watched Judah’s defeat at the hands of the Babylonians. Jeremiah responded to all this with God’s message and human tears.

Jeremiah 4:19  My heart, my heart—I writhe in pain! My heart pounds within me! I cannot be still. For I have heard the blast of enemy trumpets and the roar of their battle cries. 20Waves of destruction roll over the land, until it lies in complete desolation. Suddenly, every tent is destroyed; in a moment, every shelter is crushed. 21How long must this go on? How long must I be surrounded by war and death?

How much do we feel for the pain of the world? Are we so satisfied with our own lifestyle that we do not have any desire to help others who are suffering? How much concern do we put into the future sufferings of those who do not know Jesus? If we lack sympathy for other people, let’s ask God for it.

It is not enough to just feel pain for other’s sufferings. Jeremiah did tangible things as well. He went out to preach to them so that they will repent and need not suffer. Let’s determine to do something tangible to alleviate the pain of others. We could help out financially a friend in need. We could sponsor a child in the World Vision program. Or we could contribute towards world evangelism.

Did not take vengeance into his own hands

Jeremiah did not sought vengeance on his own but instead relied on God and committed his cause to Him.

Jer 11:18  Then the Lord told me about the plots my enemies were making against me. 19I had been as unaware as a lamb on the way to its slaughter. I had no idea that they were planning to kill me! “Let’s destroy this man and all his words,” they said. “Let’s kill him, so his name will be forgotten forever.” 20O Lord Almighty, you are just, and you examine the deepest thoughts of hearts and minds. Let me see your vengeance against them, for I have committed my cause to you.

At times we are tempted to take revenge on others who have wronged us. The Bible tells us that God knows the plots against us. Jeremiah was not aware of these plots but God brought them to his attention. We have a God who watches our back! We can ask God to watch over us and prevent the pitfalls that may befall us.

Unhappy about the injustices of life

Jeremiah 12: 1  Lord, you always give me justice when I bring a case before you. Now let me bring you this complaint: Why are the wicked so prosperous? Why are evil people so happy? 2You have planted them, and they have taken root and prospered. Your name is on their lips, but in their hearts they give you no credit at all.

The complaint of Jeremiah may be on his lips thousands of years ago but it continues to be relevant even for today’s Christians. We often wonder why some Hollywood stars who break every moral code remain rich and famous while the preacher who honors God remain poor and unappreciated. We feel that God has short-changed us.

First of all, God never promised us worldly blessings when we follow Him. He promises us eternal life in heaven (John 3:16) and abundant life on earth (John 10:10). Therefore God is not breaking His promises by not giving these things to us.

We also have to understand that earthly things are temporal. Would you rather be happy for 30 years or be happy for eternity? We envy wicked and prosperous people only if we have a short-term view.

But it does not always work that way. We know enough rich people who are not happy and poor people who are. The correlation between wealth and happiness is just not convincing enough. If that is the case, why aim for such things that will not guarantee happiness. The Bible tells us what will give happiness.

Ps 37: 4  Take delight in the Lord, and he will give you your heart’s desires.