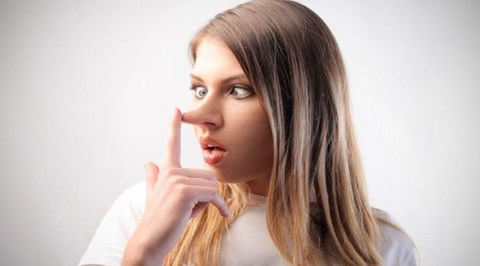 (Exo 20:16 NIV)  “You shall not give false testimony against your neighbor.

The above commandment is actually specific about lying against one’s neighbor. However, we can talk about the broader sin of lying, which is also condemned throughout the Bible. We may not place lying as very serious sins but the Bible places it among murder, stirring up strife, etc.

Proverbs 6:16­19 (NIV) There are six things the LORD hates, seven that are detestable to him: 17 haughty eyes, a lying tongue, hands that shed innocent blood, 18 a heart that devises wicked schemes, feet that are quick to rush into evil, 19 a false witness who pours out lies and a man who stirs up dissension among brothers.

Not only was lying put alongside the sins we consider as more serious, lying was mentioned twice while the rest only once.

Lying is so serious because it is the devil’s language.

(John 8:43-45 NIV)  Why is my language not clear to you? Because you are unable to hear what I say. {44} You belong to your father, the devil, and you want to carry out your father’s desire. He was a murderer from the beginning, not holding to the truth, for there is no truth in him. When he lies, he speaks his native language, for he is a liar and the father of lies. {45} Yet because I tell the truth, you do not believe me!

Someone commented, “Christians don’t tell lies; they sing them.” When we sing those beautiful songs on Sunday, telling God that He means everything to us and that we are prepared to give our all to Him, do we really mean it?

Lying to God does not only occur with singing. When we pray, do we mean what we say? It is easy to memorize and recite the Lord’s Prayer but we need to mean what we pray.

Another way we can lie to God is when we pretend to be holier than we are.

(Acts 5:1-4 NIV)  Now a man named Ananias, together with his wife Sapphira, also sold a piece of property. {2} With his wife’s full knowledge he kept back part of the money for himself, but brought the rest and put it at the apostles’ feet. {3} Then Peter said, “Ananias, how is it that Satan has so filled your heart that you have lied to the Holy Spirit and have kept for yourself some of the money you received for the land? {4} Didn’t it belong to you before it was sold? And after it was sold, wasn’t the money at your disposal? What made you think of doing such a thing? You have not lied to men but to God.”

Ananias and his wife were prepared to give their money to the church. They were not prepared to give all the money but they wanted to give the impression that they were, thereby gaining them maximum recognition in the eyes of the other believers. Peter revealed that this attitude is tantamount to lying to God.

When Jesus was on earth, He reserved His harshest criticisms for the Pharisees who pretend that they are super holy.

Let’s not make the same mistake. Do not be hypocrites. Do not appear to be holier than we are.

Lying to others
Lying against our neighbors

One way we can lie is by committing careless lying. We speak about somebody without first checking all the facts or without first understanding his situation well. We resort to gossip, which is highlighted in the Bible as a serious sin.

(Rom 1:29-31 NIV)  They have become filled with every kind of wickedness, evil, greed and depravity. They are full of envy, murder, strife, deceit and malice. They are gossips, {30} slanderers, God-haters, insolent, arrogant and boastful; they invent ways of doing evil; they disobey their parents; {31} they are senseless, faithless, heartless, ruthless.

Lying when the going gets tough

(Luke 22:55-61 NIV)  But when they had kindled a fire in the middle of the courtyard and had sat down together, Peter sat down with them. {56} A servant girl saw him seated there in the firelight. She looked closely at him and said, “This man was with him.” {57} But he denied it. “Woman, I don’t know him,” he said. {58} A little later someone else saw him and said, “You also are one of them.” “Man, I am not!” Peter replied. {59} About an hour later another asserted, “Certainly this fellow was with him, for he is a Galilean.” {60} Peter replied, “Man, I don’t know what you’re talking about!” Just as he was speaking, the rooster crowed. {61} The Lord turned and looked straight at Peter. Then Peter remembered the word the Lord had spoken to him: “Before the rooster crows today, you will disown me three times.”

The true test of our integrity is when the going gets tough. Under normal circumstances I would not think Peter would resort to lying. But when he was faced with a life-threatening situation, he resorted to lying.

Likewise in our business, we may be more prone to lying when the business is not doing well. We may think lying is the only way to get out of a difficult situation. Let’s determine not to lie and trust God to work out all things for good when we honor Him.

Genesis 12:10­20 (NIV) Now there was a famine in the land, and Abram went down to Egypt to live there for a while because the famine was severe. 11 As he was about to enter Egypt, he said to his wife Sarai, “I know what a beautiful woman you are. 12 When the Egyptians see you, they will say, ‘This is his wife.’ Then they will kill me but will let you live. 13 Say you are my sister, so that I will be treated well for your sake and my life will be spared because of you.” 14 When Abram came to Egypt, the Egyptians saw that she was a very beautiful woman. 15 And when Pharaoh’s officials saw her, they praised her to Pharaoh, and she was taken into his palace. 16 He treated Abram well for her sake, and Abram acquired sheep and cattle, male and female donkeys, menservants and maidservants, and camels. 17 But the LORD inflicted serious diseases on Pharaoh and his household because of Abram’s wife Sarai. 18 So Pharaoh summoned Abram. “What have you done to me?” he said. “Why didn’t you tell me she was your wife? 19 Why did you say, ‘She is my sister,’ so that I took her to be my wife? Now then, here is your wife. Take her and go!” 20 Then Pharaoh gave orders about Abram to his men, and they sent him on his way, with his wife and everything he had.

We should not only be concerned about words of untruth but should also check our intentions to see if we want the other party to be deceived. For example, we may be late for an appointment for half and hour and we explained to our friend that there was an accident along the way. It may be true that there was an accident along the way but that may have delayed us for only five minutes. The real reason why we are late is because we overslept and we conveniently left this part out. Our statement that there was an accident may not be wrong but we said it intending for the person to think that that was the only reason and it was none of our fault. I think that we can classify this as intending to lie.

(1 John 1:8 NIV)  If we claim to be without sin, we deceive ourselves and the truth is not in us.

To overcome this tendency, we need the search light of the Holy Spirit in our souls. We need a regular time of coming before God, asking Him to search our lives for sins and giving Him time to reveal our sins to us.

Any who uses the computer knows that regular maintenance of the hard disk is essential. We need to lay aside time to check our hard disk for errors and allow the computer to correct them. If we don’t do this regularly, the computer may still function, albeit sub-optimally, for some time, before some serious problems develop.