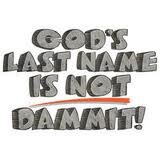 (Exo 20:7 NIV)  “You shall not misuse the name of the LORD your God, for the LORD will not hold anyone guiltless who misuses his name.

The first thing that comes to mind when we say God’s name is used in vain is when we use it carelessly in conversations. We use phrases like “Oh my God!” or “Jesus (or Gee)”  simply like an exclamation mark. The concept of God or what His name signifies is totally not in our minds when we utter it. attitude has deteriorated so much from the Old Testament days when people would not even utter the name of God out of reverence. That was why the name of the Lord was “YHWH”, without the vowels so that it was unpronounceable. Later we would add vowels to make it YaHWeH so that we can pronounce it.

I am not saying that even cutting the Lord’s name is wrong. I am saying that calling God’s name without meaning its full significance is serious enough for it to be in one of the 10 commandments.

The Lord’s name is used with great significance in the Bible. When we use the name of God but empty it of significance, we are using His name in vain.

(Mat 12:36 NIV)  But I tell you that men will have to give account on the day of judgment for every careless word they have spoken.

Breaking promises made in God’s name

Lev 19:12  Do not make a promise in my name if you do not intend to keep it; that brings disgrace on my name. I am the LORD your God. (Good News Bible)

Making promises in God’s name was not simply an Old Testament practice. In Western courts of justice, witnesses swear in God’s name to tell the truth. When we say our marriage vowels, we promise in the name of God to remain faithful to our spouse till “death do us part”.

One example of a promise made in the Lord’s name and its significance can be found in the promise made by Ruth to Naomi.

(Ruth 1:17 NIV)  Where you die I will die, and there I will be buried. May the LORD deal with me, be it ever so severely, if anything but death separates you and me.”

Are we keeping the promises that we have made in the Lord’s name?

(Mark 16:17-18 NIV)  And these signs will accompany those who believe: In my name they will drive out demons; they will speak in new tongues; {18} they will pick up snakes with their hands; and when they drink deadly poison, it will not hurt them at all; they will place their hands on sick people, and they will get well.”

That is why Christians like to end their prayers with the phrase “In Jesus’ name we pray”. We do this to invoke the authority that is in Jesus’ name.

When we pray and utter the name of Jesus, do we really believe that our prayers will be answered in Jesus’ name? Or do we utter it much like a period mark to tell others that our prayer is finished?

Another way we can misuse God’s name is to tell someone that God says something when He actually does not.

(Deu 18:20 NIV)  But a prophet who presumes to speak in my name anything I have not commanded him to say, or a prophet who speaks in the name of other gods, must be put to death.”

(Jer 14:14 NIV)  Then the LORD said to me, “The prophets are prophesying lies in my name. I have not sent them or appointed them or spoken to them. They are prophesying to you false visions, divinations, idolatries and the delusions of their own minds.

When we advise others “in God’s name”, we have to be very careful. It may be wiser to withhold our advise till we have done enough study or prayer to discern what God wants to say to that person.

Pretending to do something for God’s sake

(Mat 18:5 NIV)  “And whoever welcomes a little child like this in my name welcomes me.

(Mark 9:41 NIV)  I tell you the truth, anyone who gives you a cup of water in my name because you belong to Christ will certainly not lose his reward.

We misuse God’s name when we tell people that we are doing something “in God’s name” or “for the sake of God” when we are actually doing it for our own sake.

One area would be our ministry to God. Are we really doing it for God or for our own pleasure? In Acts 5 we saw two believers who pretended that they are giving money to the church for God’s sake when they are actually concerned about getting glory for themselves.

A person who is not really serving God for God’s sake will be keen in getting glory and recognition. He will become angry if he does not get enough credit for his work. We need to examine ourselves to make sure we don’t fall into this trap.

Do not commit adultery
Honoring your parents
No other gods