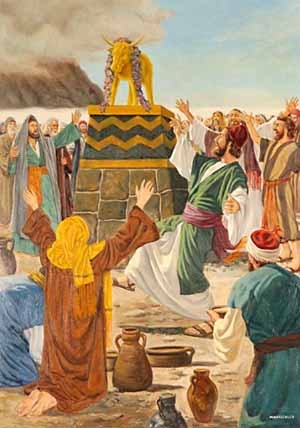 Do we have other gods?

Read more about Christians and idolatry

Be careful of relationships that can lead us to idolatry

(1 Ki 11:1-6 NIV)  King Solomon, however, loved many foreign women besides Pharaoh’s daughter–Moabites, Ammonites, Edomites, Sidonians and Hittites. {2} They were from nations about which the LORD had told the Israelites, “You must not intermarry with them, because they will surely turn your hearts after their gods.” Nevertheless, Solomon held fast to them in love. {3} He had seven hundred wives of royal birth and three hundred concubines, and his wives led him astray. {4} As Solomon grew old, his wives turned his heart after other gods, and his heart was not fully devoted to the LORD his God, as the heart of David his father had been. {5} He followed Ashtoreth the goddess of the Sidonians, and Molech the detestable god of the Ammonites. {6} So Solomon did evil in the eyes of the LORD; he did not follow the LORD completely, as David his father had done.

Marriage between royal families was a common practice in the ancient Near East because it secured peace. Although Solomon’s marital alliances built friendships with surrounding nations, they were also the beginning of his downfall. These relationships became inroads for pagan ideas and practices. Solomon’s foreign wives brought their gods to Jerusalem and eventually lured him into idolatry. (Life Application Bible)

We need not restrict dangerous relationships to marriage. Are we in close association with people whose values are so different that they can lead us into idolatry?

(1 Cor 10:5-7 NIV)  Nevertheless, God was not pleased with most of them; their bodies were scattered over the desert. {6} Now these things occurred as examples to keep us from setting our hearts on evil things as they did. {7} Do not be idolaters, as some of them were; as it is written: “The people sat down to eat and drink and got up to indulge in pagan revelry.”

Christians have to be careful about idolatry. We should not have the mindset that only bowing down to physical idols is idolatry. Let’s be determined to rid our lives of any kind of idolatry.

Do not lie
Honoring your parents
Do not commit adultery