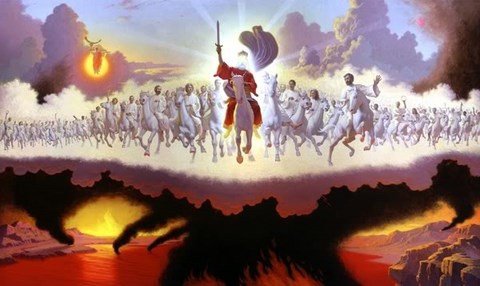 The book of Revelation is written by John the disciple of Jesus (Revelation 1:1, 4, 9; 22:8), who had been exiled to the island of Patmos by the authorities for preaching the gospel in Asia. It was called the Revelation because John wrote down the visions he received from God about things that were going to happen, events all the way to the end of the world. The book opens with specific epistles that John wrote to the seven churches that he had served in Asia. The message of God’s victory was urgently needed by them as they were facing severe persecutions.

God is in control and will have the ultimate victory

Rev 20:10 And the devil, who deceived them, was thrown into the lake of burning sulfur, where the beast and the false prophet had been thrown. They will be tormented day and night for ever and ever.

When we look at the events happening around the world, it seems like the world has gone down the path of sin like the days of Noah. It seems that God is losing the battle to Satan and losing ground. But when we read the book of Revelation, it gives us great comfort that though Satan appears to be winning, God is the one that will have the ultimate victory. The devil and his demons will one day be totally subdued and unable to do any more harm. Before that day comes, Christians have to strive. We have to pray and work for God’s kingdom like never before. And when we don’t see the results we expect, let’s not get discouraged. Know that God is still in control.

The fact that God is in control can be seen from the detailed account of events that He gave to John. The evil things that are happening around us may surprise or shock us but it certainly will not surprise God because He knew it and declared it for us thousands of years before they happened. Let’s take heart that our God is still in control.

Rev 6:8 I looked, and there before me was a pale horse! Its rider was named Death, and Hades was following close behind him. They were given power over a fourth of the earth to kill by sword, famine and plague, and by the wild beasts of the earth.

Christians will be caught up into heaven before the time of great suffering will occur for those left behind. They will have to go through the many rounds of judgment that God will be pouring out to earth.

Rev 13:15 The second beast was given power to give breath to the image of the first beast, so that the image could speak and cause all who refused to worship the image to be killed. 16 It also forced all people, great and small, rich and poor, free and slave, to receive a mark on their right hands or on their foreheads, 17 so that they could not buy or sell unless they had the mark, which is the name of the beast or the number of its name.

Those who become Christians at that time will have to go through persecution from the Antichrist. This should be a warning call for us to get our loved ones to be saved before it is too late for them to avoid all these sufferings.

Rewards to those who overcome

Rev 2:7 Whoever has ears, let them hear what the Spirit says to the churches. To the one who is victorious, I will give the right to eat from the tree of life, which is in the paradise of God.

Rev 2:11 Whoever has ears, let them hear what the Spirit says to the churches. The one who is victorious will not be hurt at all by the second death.

Rev 2:17 Whoever has ears, let them hear what the Spirit says to the churches. To the one who is victorious, I will give some of the hidden manna. I will also give that person a white stone with a new name written on it, known only to the one who receives it.

Rev 2:26 To the one who is victorious and does my will to the end, I will give authority over the nations.

Rev 3:5 The one who is victorious will, like them, be dressed in white. I will never blot out the name of that person from the book of life, but will acknowledge that name before my Father and his angels.

Rev 3:12 The one who is victorious I will make a pillar in the temple of my God. Never again will they leave it. I will write on them the name of my God and the name of the city of my God, the new Jerusalem, which is coming down out of heaven from my God; and I will also write on them my new name.

Rev 3:21 To the one who is victorious, I will give the right to sit with me on my throne, just as I was victorious and sat down with my Father on his throne.

The letters to the seven churches are filled with promises of rewards to those who overcome. In these last days, there will be tremendous temptations, deceptions and persecutions. But the rewards are also great for those who overcome. It’s like going through a tough obstacle course but the finishing prize is great.

Victory over lukewarmness and sin
​
Rev 3:16 So, because you are lukewarm—neither hot nor cold—I am about to spit you out of my mouth.
John wrote the letters to the seven churches at the beginning of the book of Revelation. Five of the seven churches received messages of areas that needed correction. Only two churches received only commendations. This means that in the end times, the majority of those in the body of Christ that have gone cold or have succumbed to sin and deception. We need to watch against lukewarmness and sin. Has our love for the Lord gone cold? Have we allowed sin to creep into our life?