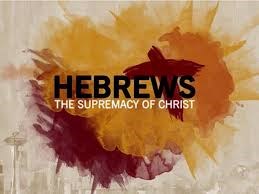 Background The author of the letter to the Hebrews is not mentioned in the book itself and has been the subject of debate by Biblical scholars. Many churches in the Roman Empire believed Paul to be the writer of Hebrews and this led to its early acceptance into the Canon by the churches. Throughout the book of Hebrews, the author emphasized the superiority of Jesus over all things. He also lays out the present priestly ministry of Christ in the life of the believer.

This message of the superiority of Jesus was particularly important to Jewish Christians in Rome, who were struggling under Nero’s persecution and were considering moving back toward the Mosaic Law. The writer to the Hebrews showed these Jewish Christian believers that, though they were faced with suffering, they were indeed following a better way and they should persevere.

Superior messenger of God’s will

The book of Hebrews starts by saying that in the last days, God has a superior method of speaking His people. He had in the past spoken to them through an intermediary – prophets – but now He was going to speak to us through His Son.

Hebrews 1: 1 In the past God spoke to our ancestors through the prophets at many times and in various ways, 2 but in these last days he has spoken to us by his Son, whom he appointed heir of all things, and through whom also he made the universe.

Reading from the commandments about what God wants us to do in particular situations is one thing. Observing how God Himself would have behaved in those situations is another thing. When Jesus lived on earth, He showed us how to do the right thing under all the different situations. That is why the study of the gospels are invaluable in guiding us as to how to live right.

Superiority over the prophets

The first verse of Hebrews tells us that not only is the method of communication through Christ superior, the messenger Christ Himself is superior to all the prophets. This Son was not only a messenger, He was the heir of all things.

Jesus Himself taught his superiority over the prophets. He told a parable implying that all those who came before Him were just prophets but He was different; He was God’s Son and heir.
Luke 20:9 He went on to tell the people this parable: “A man planted a vineyard, rented it to some farmers and went away for a long time. 10 At harvest time he sent a servant to the tenants so they would give him some of the fruit of the vineyard. But the tenants beat him and sent him away empty-handed. 11 He sent another servant, but that one also they beat and treated shamefully and sent away empty-handed. 12 He sent still a third, and they wounded him and threw him out. 13 “Then the owner of the vineyard said, ‘What shall I do? I will send my son, whom I love; perhaps they will respect him.’ 14 “But when the tenants saw him, they talked the matter over. ‘This is the heir,’ they said. ‘Let’s kill him, and the inheritance will be ours.’ 15 So they threw him out of the vineyard and killed him.
The book of Hebrews also specifically mentioned that Jesus was superior to one prophet, Moses. While Moses was faithful as a servant in God’s house, Jesus was the builder of God’s house. And we the church are God’s house.
Hebrews 3:3 Jesus has been found worthy of greater honor than Moses, just as the builder of a house has greater honor than the house itself. 4 For every house is built by someone, but God is the builder of everything. 5 “Moses was faithful as a servant in all God’s house,” bearing witness to what would be spoken by God in the future. 6 But Christ is faithful as the Son over God’s house. And we are his house, if indeed we hold firmly to our confidence and the hope in which we glory.
If we want to build our church, we need the help of Jesus the builder of the church. We need to pray and call upon Jesus. In the last days Satan is intensifying his efforts to destroy God’s church by slipping in false doctrines. We are not going to be able to counter the devil through our own efforts or human reasoning alone, we need to come against him with the power of Jesus the Builder of the church.

Superior high priest
Heb 2:18 Because he himself suffered when he was tempted, he is able to help those who are being tempted.
Heb 4:14 Therefore, since we have a great high priest who has ascended into heaven, Jesus the Son of God, let us hold firmly to the faith we profess. 15 For we do not have a high priest who is unable to empathize with our weaknesses, but we have one who has been tempted in every way, just as we are—yet he did not sin. 16 Let us then approach God’s throne of grace with confidence, so that we may receive mercy and find grace to help us in our time of need.
Jesus was not like the other high priests of Israel. He was tempted in every way by Satan, who tried to get Him to sin. Therefore, Jesus knows how we feel in whatever struggles we may go through. Furthermore, Jesus overcame every temptation. Therefore, He knows how to help us to overcome ours. No matter what struggles we may be going through, we could approach God with confidence to find help.

High Priest of a superior covenant

Heb 8:6 But in fact the ministry Jesus has received is as superior to theirs as the covenant of which he is mediator is superior to the old one, since the new covenant is established on better promises…10 This is the covenant I will establish with the people of Israel after that time, declares the Lord. I will put my laws in their minds and write them on their hearts. I will be their God, and they will be my people.

Jesus is superior to the high priests of the Old Testament because He is the High Priest of a new covenant. The old covenant had laws that are cumbersome for the people to follow. In the new covenant, God placed the laws in our hearts and minds so that we know and we want to obey Him. Nicky Gumbel of the Alpha Course gave a good illustration on this. Having the laws external to us is like carrying a bag of food. It is tiring. Having it inside us is like eating the food in the bag. Not only do we no longer have a heavy bag to carry, the food we consumed energizes us.
When a person accepts Jesus as his Saviour, Jesus is able to bring about this new covenant so that obeying God is no longer cumbersome and is a joy. This is not to say that we no longer need to struggle against sin. We all do and even the apostle Paul struggled with sin. However, we no longer see God’s commandments as cumbersome and we have an internal energy to obey God.

Phil 2:13 for it is God who works in you to will and to act in order to fulfill his good purpose.

Superior over the angels

Heb 1:6 And again, when God brings his firstborn into the world, he says, “Let all God’s angels worship him.” 7 In speaking of the angels he says, “He makes his angels spirits, and his servants flames of fire.” 8 But about the Son he says,“Your throne, O God, will last for ever and ever; a scepter of justice will be the scepter of your kingdom. 9 You have loved righteousness and hated wickedness; therefore God, your God, has set you above your companions by anointing you with the oil of joy.” 10 He also says, “In the beginning, Lord, you laid the foundations of the earth, and the heavens are the work of your hands.
​
The angels are created beings but Jesus is the creator. The same power that created the universe and sustains it is the same power that can help us in our times of trouble. Here the writer of Hebrews gave us another reason why Jesus can help us. He not only understands our problems, He has all the necessary power to help us deal with them.

1 Timothy - Being a Pastor/Christian leader
Luke - Jesus the Son of Man
John - Jesus the Messiah, Son of God