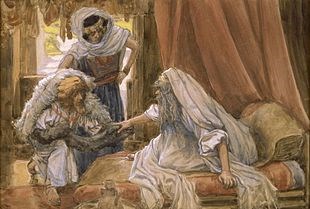 Her life was characterized by initiative.

When she saw a need, she took action, even though the action was not always right. It was Rebekah’s initiative that first caught the attention of Eliezer, the servant Abraham sent to find a wife for Isaac. It was common courtesy to give a drink to a stranger, but it took added character to also fetch water for ten thirsty camels. Later, after hearing the details of Eliezer’s mission, Rebekah was immediately willing to be Isaac’s bride.

Genesis 24:15  As he (ie Abraham’s servant) was still praying, a young woman named Rebekah arrived with a water jug on her shoulder. Her father was Bethuel, who was the son of Abraham’s brother Nahor and his wife, Milcah. 16Now Rebekah was very beautiful, and she was a virgin; no man had ever slept with her. She went down to the spring, filled her jug, and came up again. 17  Running over to her, the servant asked, “Please give me a drink.” 18  “Certainly, sir,” she said, and she quickly lowered the jug for him to drink. 19When he had finished, she said, “I’ll draw water for your camels, too, until they have had enough!”

Going beyond the call of duty is what is going to demonstrate to the world the love we have in Jesus Christ. Jesus tells us to love one another because in this way, people will know that we are Christians.

John 13:34  So now I am giving you a new commandment: Love each other. Just as I have loved you, you should love each other. 35  Your love for one another will prove to the world that you are my disciples.”

I recently read an excellent book, The Conspiracy of Kindness, wherein the author shared how successful his church was in winning souls for Jesus just by performing acts of kindness. For example, they would wash people’s cars and toilets free of charge. Usually people would stare back in disbelief when they are approached by his church people to allow them to perform certain tasks. Yet these simple acts of kindness often melt away a person’s resistance to the gospel. It is one thing to tell someone that Jesus loves them. It is another thing to show them the love Jesus and Christians have for them by tangible acts of service.

Let’s develop the initiative of Rebekah in performing acts of kindness. When someone tells us his problem, instead of doing nothing or doing the minimum, let’s ask if there is something significant that we can do. If not tell them that you will pray for them. Ask God to give you the initiative to do something more so that God may get the glory.

Her initiatives were misdirected.

Several later events help us see how initiative can be misdirected. Rebekah was aware that God’s plan would be channeled through Jacob, not Esau (Genesis 25:23). So not only did Jacob become her favorite; she actually planned ways to ensure that he would overshadow his older twin. She felt justified in deceiving her husband when the time came to bless the sons, and her ingenious plan was carried out to perfection.

Can you think of instances wherein you want to carry out God’s plan but are tempted to do so in ways that are not right? If so, what should be the way to carry out those right initiatives in the right way?

Genesis 25 : 27 As the boys grew up, Esau became a skillful hunter, a man of the open fields, while Jacob was the kind of person who liked to stay at home. 28Isaac loved Esau in particular because of the wild game he brought home, but Rebekah favored Jacob.

Rebekah’s favoritism for Jacob caused her to devise a plan to deceive her husband in order to get the blessings of his father, Isaac when it should actually have gone to the elder son Esau. This eventually led to enmity between the two brothers.

The Biblical characters seemed to be quite prone to favoritism.

Favoritism always has nasty consequences. That is why the Bible warns us against favoritism.

1 Tim 5: 21  I solemnly command you in the presence of God and Christ Jesus and the holy angels to obey these instructions without taking sides or showing special favor to anyone.

It also repeatedly tells us that our God is an impartial God.

Deut 10:17  “The Lord your God is the God of gods and Lord of lords. He is the great God, mighty and awesome, who shows no partiality and takes no bribes.

Let’s ask ourselves whether we have been guilty of favoritism. If we are the boss, do we favor one employee over another. If we are Christian leaders, do we favor some members over another? People are very quick to pick up partiality and they will adjust their attitude accordingly, leading to bad consequences.