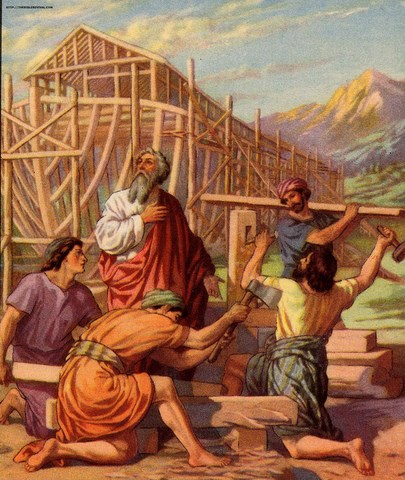 Lived a righteous life despite a sinful surrounding

Genesis 6: 6  So the Lord was sorry he had ever made them. It broke his heart. 7And the Lord said, “I will completely wipe out this human race that I have created. Yes, and I will destroy all the animals and birds, too. I am sorry I ever made them.” 8But Noah found favor with the Lord. 9  This is the history of Noah and his family. Noah was a righteous man, the only blameless man living on earth at the time. He consistently followed God’s will and enjoyed a close relationship with him.

We know how difficult it is to live a righteous life, not to mention having to do this while surrounded by a sinful environment. Noah was one such man who could and as a result he became highly regarded by God. Noah’s family was also the only family that was protected when God destroyed humankind.

Are we in an environment that is difficult to live a righteous life? Perhaps our peers expect us to smoke, crack dirty jokes, tell lies, etc. It is not easy to be different but I believe that a person who has convictions will command respect. Ask God for strength in this area so that we will not be negatively influenced by sinful surrounding.

Noah was given a huge task but he did it anyway and even despite ridicule.

Genesis 6:14  “Make a boat from resinous wood and seal it with tar, inside and out. Then construct decks and stalls throughout its interior. 15  Make it 450 feet long, 75 feet wide, and 45 feet high. 16Construct an opening all the way around the boat, 18 inches below the roof. Then put three decks inside the boat—bottom, middle, and upper—and put a door in the side. 17  “Look! I am about to cover the earth with a flood that will destroy every living thing. Everything on earth will die! 18  But I solemnly swear to keep you safe in the boat, with your wife and your sons and their wives. 19Bring a pair of every kind of animal—a male and a female—into the boat with you to keep them alive during the flood. 20  Pairs of each kind of bird and each kind of animal, large and small alike, will come to you to be kept alive. 21  And remember, take enough food for your family and for all the animals.” 22  So Noah did everything exactly as God had commanded him.

It must have been an awesome task to be building a boat so big it could house every specie of animals. It must also have evoked strong ridicule from the people around him as Noah was building such a big boat on dry land. Yet Noah persisted and the Bible says he did everything exactly as God had commanded him.

Does God ask us to do difficult things? What difficult things do we have to do compared to what Noah has done? Or what difficult thing Jesus had done, which even the Son of God had to struggle in the Garden of Gethsamene? When we are faced with difficult tasks, remember that people of God in the past had done it anyway and they were highly regarded by God for that.

Many of us have trouble sticking to any project, whether or not it is directed by God. It is interesting that the length of Noah’s obedience was greater than the lifespan of people today.

Research has shown that it takes a person an average of six to seven times exposure to the gospel before he will believe. That means that believing after hearing the gospel for the first time, while it is entirely possible, is clearly not the norm. This also means that we have to persevere if we want to bring someone to Christ. It may take years but if we persevere, we will surely see the results.

Is there a project God had given you but you have put aside because you have not seen results? Why not take it up again? Ask God to give you the strength and endurance to carry through to the end.