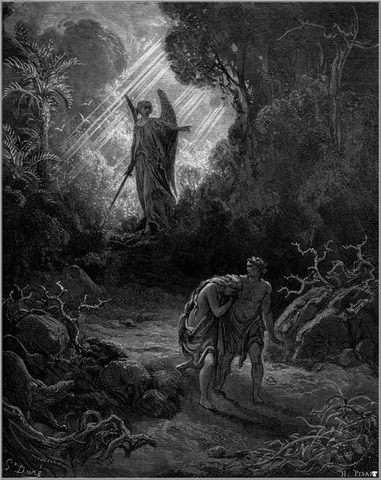 Acted without considering the consequences

Genesis 2:15  The Lord God placed the man in the Garden of Eden to tend and care for it. 16  But the Lord God gave him this warning: “You may freely eat any fruit in the garden 17except fruit from the tree of the knowledge of good and evil. If you eat of its fruit, you will surely die.”

God gave Adam complete freedom in the garden, with the responsibility to tend and care for it. But one tree was off-limits, the tree of the knowledge of good and evil. Adam didn’t pause to consider the consequences when Eve asked him to eat it. He went ahead and ate because it seems good at the moment.

The sin was a seemingly small one but it has tremendous implications. This act ushered sin into the world and spelled the downfall of mankind. It required God to send His only Son to pay the penalty of our sins. Yes, our seemingly small sins can have tremendous consequences. A moment of rage can cause us to hurt someone, end up in jail, and totally change our life. A moment of weakness can cause us to destroy a good marriage and years of regret. Before we act, we should always think of the consequences. Is it worth it? I am sure that if Adam had seriously considered the consequences, he would not have eaten the fruit.

Are you tempted to commit some small sin? Do not underestimate the potential of this sin to cause harm. Think of its consequences before you commit it.

Avoided responsibility and blamed others

Genesis 3:11  “Who told you that you were naked?” the Lord God asked. “Have you eaten the fruit I commanded you not to eat?” 12″Yes,” Adam admitted, “but it was the woman you gave me who brought me the fruit, and I ate it.”

Adam was also guilty of eating the forbidden fruit but he chose to put the blame on others as if he was not the one really at fault.

Before God can forgive us, we have to admit our own mistakes. It is not enough to admit other people’s mistakes. God will deal with them separately.

1 Jn 1:9  But if we confess our sins to him, he is faithful and just to forgive us and to cleanse us from every wrong.

Is there a sin which you have tried not to admit? There will be no healing and forgiveness until you do. Let’s think of the sins we try to rationalize away and lay it before God honestly and confess them to Him.

Gen 3:  6  The woman was convinced. The fruit looked so fresh and delicious, and it would make her so wise! So she ate some of the fruit. She also gave some to her husband, who was with her. Then he ate it, too. 7  At that moment, their eyes were opened, and they suddenly felt shame at their nakedness. So they strung fig leaves together around their hips to cover themselves.

Instead of facing the issue (which in this case was confessing their sin to God), Adam went to hide himself. What Adam did is in fact a common reaction to problems. It is quite natural to prefer to run away from problems rather than face them fair and square. However, if we do so, problems seldom get solved.

Is there a mistake that you have made? Instead of making excuses, let’s face it.

Is there a problem you have been running away from, like having to share the gospel with a loved one but you are afraid? Instead of running away from the problem, let’s face it. Ask God for the courage to face your problems and then tackle them head-on.

Allowed his loved one to influence him to sin

Genesis 3: 6  The woman was convinced. The fruit looked so fresh and delicious, and it would make her so wise! So she ate some of the fruit. She also gave some to her husband, who was with her. Then he ate it, too.

Adam readily followed Eve’s advice and ate the forbidden fruit even though he knew it to be wrong. Very often we would dismiss the advice of “bad people” readily but when it comes to someone we trust, we let our guard down and readily accept their advice. Sometimes it is common for a spouse to discourage the other from giving too much time or money for God’s service. And we commonly take the advice because we believe that they are proceeding from good intentions.