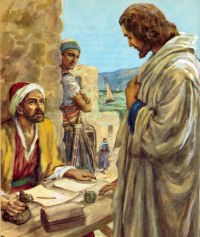 Matthew’s story is told in the Gospels. He is also mentioned in Acts 1:13.

Followed Jesus despite the costs

More than any other disciple, Matthew had a clear idea of how much it would cost to follow Jesus, yet he did not hesitate a moment. When he left his tax-collecting booth, he guaranteed himself unemployment. For several of the other disciples, there was always fishing to return to, but for Matthew, there was no turning back. Tax collectors worked for the Roman government and often collected more than what the law requires, pocketing the difference for themselves. They were considered traitors and hated by the Jewish community.

(Mat 16:24) Then Jesus said to his disciples, “If anyone would come after me, he must deny himself and take up his cross and follow me.

The gift of salvation is free. But there is a high cost in following Jesus as a disciple, carrying out His mission for our lives. We often have to make sacrifices (deny ourselves) in terms of time and money. We need to take up our cross daily. Jesus’ cross symbolizes His mission on earth. We take up our cross when we also carry out God’s purpose for our lives on earth.

The cost of discipleship is high. Often we grow weary doing the work of God. We need to ask God for strength to sustain us. We need to look towards the present suffering to the reward that awaits us.

(Mat 16:27) For the Son of Man is going to come in his Father’s glory with his angels, and then he will reward each person according to what he has done.

Used his old skills in a brand new way

Jesus gave Matthew a new purpose for his skills. When he followed Jesus, the only tool from his past job that he carried with him was his pen for he was a tax collector and had to keep many records. That skill he managed to use for God’s glory when he wrote the foundation of what is to be known as Matthew’s gospel. Matthew’s experience points out that each of us, from the beginning, is one of God’s works in progress. Much of what God has for us he gives long before we are able to consciously respond to him.

Is God doing something in your life and developing some aspect of you that you can now use for His glory. You may have a special skill developed from your job that you can use in a brand new way to serve God. You may have gone through some experiences in the past that God can use to help others with.

Matthew was a keen observer of Jesus, and he undoubtedly recorded what he saw going on around him. The Gospel that bears his name came as a result.

Are we also a keen observer of Jesus? Are we interested to study His life in detail so that we can follow His example? Some time back a group of Christians made a commitment never to make any important decision without first considering “What Would Jesus Do?” in that same situation. Because of that decision, lives were dramatically transformed, as people became conscious of the decisions that they would otherwise make in a subconscious manner.

Are you making decisions in a way that Jesus would? How would Jesus make that decision? WWJD?

Invited many friends to his home to meet Jesus

Having been accepted by Jesus, Matthew immediately tried to bring others into contact with Jesus.

(Mat 9:9-10) As Jesus went on from there, he saw a man named Matthew sitting at the tax collector’s booth. “Follow me,” he told him, and Matthew got up and followed him. {10} While Jesus was having dinner at Matthew’s house, many tax collectors and “sinners” came and ate with him and his disciples.

Matthew was so overwhelmed by Jesus’ acceptance and willingness to forgive him that he wanted his other “sinner” friends to experience the same. That evening, Jesus was invited to his house for a meal and so were many tax collectors and “sinners”.

Are we just associating with Christians or are we bringing Jesus to others who do not know him?

Hannah - Getting what you want
Elizabeth
Esau