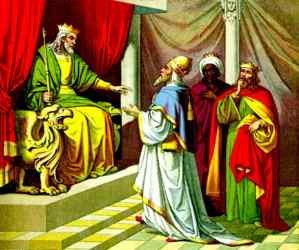 Treated things with more importance than he treated people.

Herod is remembered as a builder of cities and the lavish rebuilder of the Temple in Jerusalem. But he also destroyed people. His suspicions and jealousy led to the murder of several of his children and the death of his wife Mariamne.

Herod did not attribute to people the same importance he placed on things. He showed no regard for humans as he destroyed whoever gets in his way, even as he was building things.

Do you find that you place too much emphasis on material things but are unfazed when your relationship with others break down? Is there some way you can use your possessions to love others?

Expected to receive respect but failed to see that it has to be earned.

Herod’s title, king of the Jews, was granted by Rome but never accepted by the Jewish people. He was not part of the Davidic family line, and he was only partly Jewish. Although Israel benefited from Herod’s lavish efforts to repair the Temple in Jerusalem, he won little admiration because he also rebuilt various pagan temples.

Herod failed to win the respect of the people he ruled. He expected this respect to be due to him as a result of the title granted by Rome. Likewise we have been given various forms of “titles” in this life. For example, men are the “head of the household”. But men should not expect to be submitted to simply because they are the head. Respect has to be earned by men taking spiritual leadership in the home. In the workplace, we may be called a “manager” with supervisory responsibilities over several people. Similarly, we should not expect respect to be our entitlement. Are we doing things to win the respect of your subordinates like looking after their needs, and providing direction at the workplace? Let’s remember that respect has to be earned.

Was insecure about his position leading him to commit sinful acts

Because his royal title was not genuine, Herod was constantly worried about losing his position. His actions when hearing from the astrologers about their search for the new king are consistent with all that we know about Herod. He planned to locate and kill the child before he could become a threat.

(Mat 2:1-3) After Jesus was born in Bethlehem in Judea, during the time of King Herod, Magi from the east came to Jerusalem {2} and asked, “Where is the one who has been born king of the Jews? We saw his star in the east and have come to worship him.” {3} When King Herod heard this he was disturbed, and all Jerusalem with him. …..16 When Herod realized that he had been outwitted by the Magi, he was furious, and he gave orders to kill all the boys in Bethlehem and its vicinity who were two years old and under, in accordance with the time he had learned from the Magi.

We can also sometimes feel so insecure about our position that it causes us to sin. One way we sin is by being anxious when we were told in the Bible specifically not to.

(Phil 4:6) Do not be anxious about anything, but in everything, by prayer and petition, with thanksgiving, present your requests to God.

The reason why we do not need to be anxious is because God has promised to look after us.

(Luke 12:6-7) Are not five sparrows sold for two pennies ? Yet not one of them is forgotten by God. {7} Indeed, the very hairs of your head are all numbered. Don’t be afraid; you are worth more than many sparrows.

Are you insecure about your position, maybe at work? Commit your anxiety to God. Ask God to look after you.

Lot
Hannah - Getting what you want
Noah