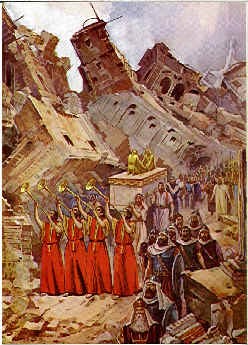 Joshua 6:2  But the Lord said to Joshua, “I have given you Jericho, its king, and all its mighty warriors. 3  Your entire army is to march around the city once a day for six days. 4Seven priests will walk ahead of the Ark, each carrying a ram’s horn. On the seventh day you are to march around the city seven times, with the priests blowing the horns. 5When you hear the priests give one long blast on the horns, have all the people give a mighty shout. Then the walls of the city will collapse, and the people can charge straight into the city.”

This strange military maneuver was a test of the Israelites’ faith and their willingness to follow God completely. God was making it undeniably clear that the battle would depend upon him, and not upon Israel’s weapons and expertise. This is why priests carrying the Ark, not soldiers, led the Israelites into battle.

Sometimes God asks us to do something that we may think is stupid. However, if we are sure that it is God’s intent, we should go ahead and do it anyway. God will never ask us to do something worthless. At times, He is testing us to see if we would obey Him. Or it may be something that has significance in the spiritual realm, which we are not able to comprehend. We just have to do our part and trust that He will act, even if His methods appear strange to us.

Looked beyond the situation and saw God.

Numb 13:31But the other men who had explored the land with him answered, “We can’t go up against them! They are stronger than we are!” 32So they spread discouraging reports about the land among the Israelites: “The land we explored will swallow up any who go to live there. All the people we saw were huge. 33  We even saw giants there, the descendants of Anak. We felt like grasshoppers next to them, and that’s what we looked like to them!”

Num 14:6  Two of the men who had explored the land, Joshua son of Nun and Caleb son of Jephunneh, tore their clothing. 7They said to the community of Israel, “The land we explored is a wonderful land! 8And if the Lord is pleased with us, he will bring us safely into that land and give it to us. It is a rich land flowing with milk and honey, and he will give it to us! 9Do not rebel against the Lord, and don’t be afraid of the people of the land. They are only helpless prey to us! They have no protection, but the Lord is with us! Don’t be afraid of them!”

Do you have a difficulty to overcome? Trust God to work beyond the situation and intervene with a miracle.

Joshua and Caleb are the only adults during the exodus to enter into the promised land. Every one else was not permitted to enter. And they could enter because they believed God’s promise.

Num 32:10Then the Lord was furious with them, and he vowed, 11‘Of all those I rescued from Egypt, no one who is twenty years old or older will ever see the land I solemnly promised to Abraham, Isaac, and Jacob, for they have not obeyed me completely. 12The only exceptions are Caleb son of Jephunneh the Kenizzite and Joshua son of Nun, for they have wholeheartedly followed the Lord.’

The Bible is clear that no one who doubts will get anything from God.

Jas 1:6  But when you ask him, be sure that you really expect him to answer, for a doubtful mind is as unsettled as a wave of the sea that is driven and tossed by the wind. 7People like that should not expect to receive anything from the Lord.

Willing to live under Moses’ shadow to learn from him

Ex 24:13  So Moses and his assistant Joshua climbed up the mountain of God.

Exod 33: 11  Inside the Tent of Meeting, the Lord would speak to Moses face to face, as a man speaks to his friend. Afterward Moses would return to the camp, but the young man who assisted him, Joshua son of Nun, stayed behind in the Tent of Meeting.

Joshua’s basic training was living with Moses—experiencing firsthand what it meant to lead God’s people. We may often be ambitious in God’s ministry and want to start out doing big things instead of following under the shadow and tutelage of someone more experienced. Learn from the example of Joshua, who did not mind learning under Moses, and being his assistant.

Do you feel discouraged that you have to do take orders rather than give them? Be patient and ask God to learn as much as you can from your mentor.

Isaiah
Hannah - Getting what you want
Joseph (Jesus' father)