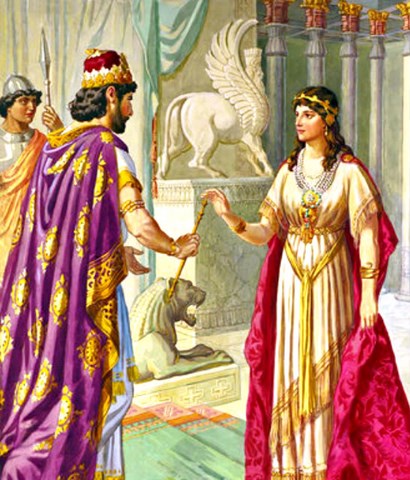 Esther’s story is told in the book of Esther.

Willing to take great risks to do God’s work

“Go and gather together all the Jews of Susa and fast for me. Do not eat or drink for three days, night or day. My maids and I will do the same. And then, though it is against the law, I will go in to see the king. If I must die, I am willing to die” (Esther 4:16)

Esther’s beauty and character won Xerxes’ heart, and he made her his queen. Even in her favored position, however, she would risk her life by attempting to see the king when he had not requested her presence. There was no guarantee that the king would even see her.

What do you know God is calling you to do but you are holding back because of the risks? Identify them right now and commit them to the Lord. Ask God to help you to put your security in Him and not in temporal things. Ask God to give you the faith required to undertake those risks. Combined prayer with planning

She made her plans to save the people carefully. In addition, the Jews were asked to fast and pray with her before she went to the king.

“Go and gather together all the Jews of Susa and fast for me. Do not eat or drink for three days, night or day. My maids and I will do the same. And then, though it is against the law, I will go in to see the king. If I must die, I am willing to die” (Esther 4:16)

Esther also planned two dinners for the king and Haman so that Haman’s evil plot can be exposed.

Prayer is not a substitute for good planning. God uses our mental faculties, amongst other things, to fulfill His tasks. Are you foregoing planning because you think that it is not spiritual? Doing something in accordance with our plans without first seeking God is wrong. Laying out a plan but not allowing God the flexibility to change those plans is also wrong. Going head-on with our work with only prayer but without planning is also wrong.

What are you doing today that could do with some planning? Are you trying to reach your neighborhood for Christ? Some planning would help – like identifying the profile of the people, what they like, what activities you can organize, their felt needs, best way to communicate to these people, etc. Are you trying to reach a friend for Christ? In your planning you can include how you can maintain contact with him, how you can show your kindness to him in tangible ways and how you can share the gospel with him. You can even use a little book to record all these activities so that you will always be reminded to plan and pray for them.

As we do our part, God does His part

In the meantime, God was working behind the scenes. He caused Xerxes to read the historical records of the kingdom late one night, and the king discovered that Mordecai had once saved his life. Xerxes wanted to honor Mordecai for that act and this intention was instrumental in turning the tables around Haman, who had wanted to kill Mordecai and the rest of the Jews.

Esther 6 That night the king had trouble sleeping, so he ordered an attendant to bring the historical records of his kingdom so they could be read to him. 2In those records he discovered an account of how Mordecai had exposed the plot of Bigthana and Teresh, two of the eunuchs who guarded the door to the king’s private quarters. They had plotted to assassinate the king. 3″What reward or recognition did we ever give Mordecai for this?” the king asked. His attendants replied, “Nothing has been done.”

Esther, by herself, may never be able to save Mordecai or the Jews but God probably knew that. That is why He was working in the background and orchestrating the whole event. Have you ever wondered if your little action will make any difference in a person’s life? Maybe it won’t. But God will work in the background and cause other things to happen in that person’s life so that collectively these things will make a difference.

Did not let an opportunity to serve God pass her by

Esther 4:13  Mordecai sent back this reply to Esther: “Don’t think for a moment that you will escape there in the palace when all other Jews are killed. 14  If you keep quiet at a time like this, deliverance for the Jews will arise from some other place…

The omnipotent God can always find some ways to accomplish His purpose. But we are privileged if He were to call us. Let’s treasure every opportunity God has given you to serve Him. Do not serve Him with reluctance. Service to God carries high rewards not only in this life but also in the next. We should be glad that we have been presented with this opportunity.

Have we been guilty of serving God grudgingly? Let’s confess that to God right now. And let’s put more enthusiasm into God’s work.

(Clarification : That is not to say that we should say “Yes” to every opportunity to serve Him. But we should serve Him if it is within our spiritual gifts and resources.)

Esther was selected to be queen because Queen Vashti did something to anger the king and was disposed. Esther became the replacement of Vashti.

Esther 1: 10  On the seventh day of the feast, when King Xerxes was half drunk with wine, he told Mehuman, Biztha, Harbona, Bigtha, Abagtha, Zethar, and Carcas, the seven eunuchs who attended him, 11to bring Queen Vashti to him with the royal crown on her head. He wanted all the men to gaze on her beauty, for she was a very beautiful woman. 12  But when they conveyed the king’s order to Queen Vashti, she refused to come. This made the king furious, and he burned with anger…..19 So if it please the king, we suggest that you issue a written decree, a law of the Persians and Medes that cannot be revoked. It should order that Queen Vashti be forever banished from your presence and that you choose another queen more worthy than she….2:8As a result of the king’s decree, Esther, along with many other young women, was brought to the king’s harem at the fortress of Susa and placed in Hegai’s care.

Because God is in control of the whole universe, it nothing can happen by chance. If we are called into a particular position, God must have intended it for a purpose. Let’s look at where we are currently. How can God use us in the company? Can we pray for a target to share the gospel with our colleagues? God also allowed us to come into contact with certain people. How can we use this relationship to glorify God and further His work?