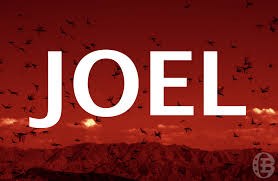 “The day of the Lord” is repeated five times in this short book (see 2:1, 11, 31; 3:14). This is a common phrase used in the Old Testament and refers to a time when God will do whatever He has planned out to do. In the book of Joel it referred to God’s impending judgment (in the form of a locust plague). In other parts of the Bible it could refer to an event such as the destruction of Jerusalem or the final period of history when God will defeat all the forces of evil.

When God’s time has arrived, His actions move swiftly

Joel 1:5 Wake up, you drunkards, and weep! Wail, all you drinkers of wine; wail because of the new wine, for it has been snatched from your lips. 16 Has not the food been cut off before our very eyes—joy and gladness from the house of our God?

We often wonder why God does not act as what we expected. God acts within His own timing and not ours. Because He sees past, present and future, He knows when is the best time to carry out something. But we must not mistaken God’s delay for a change of mind on God’s part. God will surely act according to what He has promised. And when He does, His actions are swift. Joel gave vivid imageries that when God’s judgment comes, the wine will be snatched from their lips and the food disappearing before their very eyes.

Joel 2:12 “Even now,” declares the Lord,“return to me with all your heart, with fasting and weeping and mourning.” 13 Rend your heart and not your garments. Return to the Lord your God, for he is gracious and compassionate, slow to anger and abounding in love, and he relents from sending calamity.

Many people wonder why God does not do anything about sin. People who indulge in sin openly may appear to do better than God-fearing folks. We wonder whether God will carry out His judgments against sin as proclaimed in the Bible.

God is not slow in judging sinners. His “delay” is due to His mercy and His not wanting people to perish.
2 Peter 3:9 The Lord is not slow in keeping his promise, as some understand slowness. Instead he is patient with you, not wanting anyone to perish, but everyone to come to repentance.
God wants to give us a chance to turn back to Him. But we must not assume that because God’s judgment is delayed, He is no longer taking sin seriously. The vivid descriptions of judgment in the book of Joel should warn us that God takes sin seriously will definitely judge sin. We cannot assume that anyone can get away with sin.

God may have taken something from you due to punishment for sin or for putting you through trials. But there will come a day appointed by God when He will restore you back.

Joel 3:18 “In that day the mountains will drip new wine,and the hills will flow with milk; all the ravines of Judah will run with water. A fountain will flow out of the Lord’s house and will water the valley of acacias.
We often wonder how God will be able to restore the great loss that we have faced. But God has promised that He will do that great miracle for us.

Joel 2:25 “I will repay you for the years the locusts have eaten—the great locust and the young locust, the other locusts and the locust swarm—my great army that I sent among you. 26 You will have plenty to eat, until you are full, and you will praise the name of the Lord your God, who has worked wonders for you; never again will my people be shamed.
When God finished the trials for Job, He also restored him beyond what he had lost.
​
Job 42:12 The Lord blessed the latter part of Job’s life more than the former part. He had fourteen thousand sheep, six thousand camels, a thousand yoke of oxen and a thousand donkeys. 13 And he also had seven sons and three daughters.