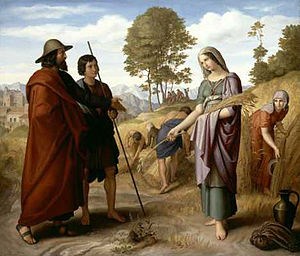 The story starts with a lady called Naomi who went to a foreign country to escape the famine in her country. There, her husband and two sons died and left her alone with her two daughter-in-laws, Ruth and Orpah. Naomi persuaded both of them to start their lives afresh. Orpah took the advice and left Naomi but Ruth decided to stay on an be a blessing to her. Her famous reply to Naomi is our key verse for this study.

(Ruth 1:16-17 NIV) But Ruth replied, “Don’t urge me to leave you or to turn back from you. Where you go I will go, and where you stay I will stay. Your people will be my people and your God my God. {17} Where you die I will die, and there I will be buried. May the LORD deal with me, be it ever so severely, if anything but death separates you and me.”

We don’t require abundance to bless others

Ruth is a fine example of someone who does not wait to have abundance before she starts blessing others. She had absolutely nothing except her youth and strength. God could multiply whatever little we have to bless others. In the case of Ruth, God used even her misfortune and suffering to be a blessing to others. She was a widow herself so God could use her to minister to another widow, Naomi.

The miracle of feeding the 5 thousand was one example. One little boy surrender what little he had – only five loaves of bread and two fishes. And in the end, they gathered twelve basket full of leftovers!

(John 6:5-12 NIV) When Jesus looked up and saw a great crowd coming toward him, he said to Philip, “Where shall we buy bread for these people to eat?” {6} He asked this only to test him, for he already had in mind what he was going to do. {7} Philip answered him, “Eight months’ wages would not buy enough bread for each one to have a bite!” {8} Another of his disciples, Andrew, Simon Peter’s brother, spoke up, {9} “Here is a boy with five small barley loaves and two small fish, but how far will they go among so many?” {10} Jesus said, “Have the people sit down.” There was plenty of grass in that place, and the men sat down, about five thousand of them. {11} Jesus then took the loaves, gave thanks, and distributed to those who were seated as much as they wanted. He did the same with the fish. {12} When they had all had enough to eat, he said to his disciples, “Gather the pieces that are left over. Let nothing be wasted.”

Application : We may feel that we need to be very spiritually mature and have a PhD in theology before we can disciple others. If we have this mentality, we probably never will. Let’s use whatever we have to bless others and ask God to multiply our offerings to others.

Many people would only bless others when it is totally convenient. We give others a lift only when it is en route to where we are going. We agree to disciple others only at a time convenient to us. Ruth shows us that blessing others often require sacrifice of work and effort. She had to work hard in the fields so that Naomi could eat.

(Ruth 2:7 NIV) She said, ‘Please let me glean and gather among the sheaves behind the harvesters.’ She went into the field and has worked steadily from morning till now, except for a short rest in the shelter.”

Boaz also had to make sacrifices in order to bless others. He asked his workers to leave some grain so that Ruth could glean.

(Ruth 2:15-16 NIV) As she got up to glean, Boaz gave orders to his men, “Even if she gathers among the sheaves, don’t embarrass her. {16} Rather, pull out some stalks for her from the bundles and leave them for her to pick up, and don’t rebuke her.”

In contrast, Ruth’s closest kin was not willing to make sacrifices in order to bless others. He knew that he would have to provide for her and give her children if he agreed to take on the responsibility and he backed out.

(Ruth 4:6 NIV) At this, the kinsman-redeemer said, “Then I cannot redeem it because I might endanger my own estate. You redeem it yourself. I cannot do it.”

The kinsman who did not sacrifice to be a blessing remained an unknown man in the Bible; his name was not even mentioned.

The disciples of the early church were also good examples of sacrificing of much to bless others.

(Acts 4:34-35 NIV) There were no needy persons among them. For from time to time those who owned lands or houses sold them, brought the money from the sales {35} and put it at the apostles’ feet, and it was distributed to anyone as he had need.

(2 Corinthians 8:3-5 NIV) For I testify that they gave as much as they were able, and even beyond their ability. Entirely on their own, {4} they urgently pleaded with us for the privilege of sharing in this service to the saints. {5} And they did not do as we expected, but they gave themselves first to the Lord and then to us in keeping with God’s will.

God multiplies your blessings to others

Ruth only wanted to be a blessing to her mother-in-law by providing for her. She would never imagine that God would take this simple blessing and multiply it infinite times.

(Ruth 4:13-17 NIV) So Boaz took Ruth and she became his wife. Then he went to her, and the LORD enabled her to conceive, and she gave birth to a son. ….{17} The women living there said, “Naomi has a son.” And they named him Obed. He was the father of Jesse, the father of David.

Ruth eventually married Boaz and they have a beautiful son who will grow up to be the grandfather of King David. We know that from David’s descendants come the Lord Jesus Himself. Although Ruth only decided to be a blessing to her mother-in-law, God chose her to be a blessing to the whole world!

The earlier example of the boy with five loaves and two fishes also illustrate the point. Eventually, God multiplied whatever little the boy had and in the end, they gathered twelve basket full of leftovers!

Blessing others result in blessings for ourselves

Ruth’s untiring labor of love for her mother-in-law soon earned her the respect and admiration of the villagers. Boaz, their boss, came to know about it and decided that he would be a blessing himself to Ruth and her mother-in-law.

(Ruth 2:5-12 NIV) Boaz asked the foreman of his harvesters, “Whose young woman is that?” {6} The foreman replied, “She is the Moabitess who came back from Moab with Naomi. {7} She said, ‘Please let me glean and gather among the sheaves behind the harvesters.’ She went into the field and has worked steadily from morning till now, except for a short rest in the shelter.” {8} So Boaz said to Ruth, “My daughter, listen to me. Don’t go and glean in another field and don’t go away from here. Stay here with my servant girls. {9} Watch the field where the men are harvesting, and follow along after the girls. I have told the men not to touch you. And whenever you are thirsty, go and get a drink from the water jars the men have filled.” {10} At this, she bowed down with her face to the ground. She exclaimed, “Why have I found such favor in your eyes that you notice me–a foreigner?” {11} Boaz replied, “I’ve been told all about what you have done for your mother-in-law since the death of your husband–how you left your father and mother and your homeland and came to live with a people you did not know before. {12} May the LORD repay you for what you have done. May you be richly rewarded by the LORD, the God of Israel, under whose wings you have come to take refuge.”

The Bible teaches that if we give to others, God will give to us many times over.

(Luke 6:38 NIV) Give, and it will be given to you. A good measure, pressed down, shaken together and running over, will be poured into your lap. For with the measure you use, it will be measured to you.”

In the beginning of the book of Ruth, we read that Naomi was extremely negative about what God had allowed to happen to her.

In a complete turn of events, Naomi indirectly blessed God. She acknowledges that Boaz was sent from the Lord to bless them.

This sudden turn of events happen simply because Boaz chose to bless Ruth and her.