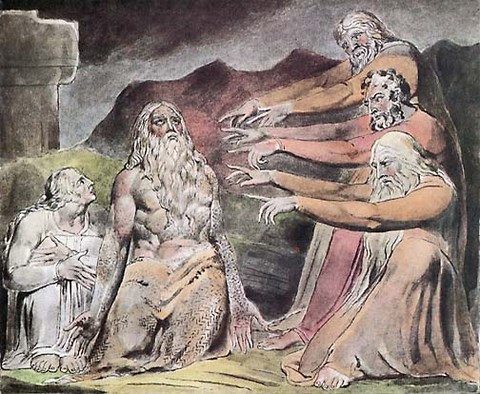 Job is a wealthy land and lifestock owner who lived in the land of Uz. Job’s story is told in the book of Job. He is also referred to in Ezekiel 14:14, 20 and James 5:11.

Do not place all our hopes on perishable things.

Job’s wealth and family to give him a very happy life, and, for a while, they did. But earthly things are temporal. We know that we cannot take them with us when we die. We also do not know how long we can keep them when we are live. Job found this out when he lost most of his possessions and family in an instant.

Do not complain about misfortunes because he acknowledges the sovereignty of God.

To those so quick to ask why at the smallest misfortune, Job’s faithfulness seems incredible. Yet when Job heard of all the misfortunes that had befallen him, he could praise God.

Job1 : 21He said, “I came naked from my mother’s womb, and I will be stripped of everything when I die. The Lord gave me everything I had, and the Lord has taken it away. Praise the name of the Lord!” 22In all of this, Job did not sin by blaming God.

This is the one thing about Job that impresses me most. I am prone to complain when there is a traffic jam, when the elevator is slow, when my food doesn’t taste good… How different is Job! He did not complain even though he lost everything dear to him. And the secret is because he acknowledges God’s sovereignty.

Be prepared to wait for God’s answers.

Our age of “instant” everything has caused us to lose the ability to wait. Of all that we want now, relief from pain is at the top of our list. We want an instant cure for everything from toothaches to heartbreaks.

But God, for His own reasons, does not always choose to answer us immediately. It could be that He is trying to teach us patience. It could also be that we would be able to understand the answers better if He revealed it to us later. The Bible encourages us to wait patiently for God to act.

Psalms 37:7 Be still in the presence of the Lord, and wait patiently for him to act.

Job eventually lost patience and allowed his desire to understand why he was suffering overwhelm him and make him question God. Are there situations that we have been impatient with God? Maybe we asked for healing and it has not come. Or we asked for salvation of our loved ones and they are still disbelieving. Let’s make a decision to wait on the Lord. We should continue asking but wait on the Lord to act.

We have to acknowledge God’s sovereignty beyond perceived cause and effect.

When Job expressed his frustration, his friends were ready with their answers. They believed that the law of cause and effect applied to all people’s experiences. Their view of life boiled down to this: Good things happen to good people, and bad things happen to bad people. Because of this, they felt their role was to help Job admit to whatever sin was causing his suffering.

Job was also influenced by his friends and went along the same line of thought. He wanted God to tell him which area he had sinned. Implicit in this is Job saying : If I had not sinned against you, why are you inflicting so much suffering on me?

Job 13:22  Now summon me, and I will answer! Or let me speak to you, and you reply. 23Tell me, what have I done wrong? Show me my rebellion and my sin. 24  Why do you turn away from me? Why do you consider me your enemy? 25  Would you terrify a leaf that is blown by the wind? Would you chase a dry stalk of grass?

When God finally spoke, he didn’t offer Job an answer as to the cause and effect of his sufferings. He merely pointed Job to His sovereignty. Instead of answering Job’s questions, God bombarded Job with a whole lot of questions. God asks Job a series of questions that no human could possibly answer.

Job 38:1  Then the Lord answered Job from the whirlwind: “Who is this that questions my wisdom with such ignorant words? 3Brace yourself, because I have some questions for you, and you must answer them. 4″Where were you when I laid the foundations of the earth? Tell me, if you know so much. 5Do you know how its dimensions were determined and who did the surveying? 6What supports its foundations, and who laid its cornerstone

Finally Job understood that God was trying to tell him not to question His sovereignty. And the reason why he should not is because being human, he has no way to understand the workings of God’s mind. During difficult times, we, too, must humbly remember our position before the eternal, holy, incomprehensible God.

Are you facing difficult times today? Is there a problem that you cannot solve or an illness you have not received healing for? Have you been questioning God to give you the answers?

Not all questioning is bad. If we want to know if there is some sin in our life that is causing us the difficulties so that we may repent from the sin, then it is all right to question God. But in Job’s case, he was very sure his suffering was not due to his sins. He questions God’s right to inflict suffering on him despite his not having sinned.

Are we questioning God’s right to allow certain events into our life? Let’s confess this sin to God. And accept the fact that God may work in our life in ways that we would never understand even if He were to explain it to us. We only have to understand that we have a God who knows what He is doing. And whatever He does, it is motivated by love for us and for our good.

Rom 8:28  And we know that God causes everything to work together for the good of those who love God and are called according to his purpose for them.

Job 1:4-5 (NIV) His sons used to take turns holding feasts in their homes, and they would invite their three sisters to eat and drink with them. 5 When a period of feasting had run its course, Job would send and have them purified. Early in the morning he would sacrifice a burnt offering for each of them, thinking, “Perhaps my children have sinned and cursed God in their hearts.” This was Job’s regular custom.

Job prays for his children regularly. He cares for their spiritual condition. How different from the prophet Eli who did not seem to take the sins of his sons seriously. Although his sons committed grave sins before the Lord, it was not mentioned that Eli even petitioned to God for their forgiveness or take any disciplinary steps against them.

1 Samuel 2:23-25 (NIV) So he said to them, “Why do you do such things? I hear from all the people about these wicked deeds of yours. 24 No, my sons; it is not a good report that I hear spreading among the Lord’s people. 25 If a man sins against another man, God may mediate for him; but if a man sins against the LORD, who will intercede for him?” His sons, however, did not listen to their father’s rebuke, for it was the Lord’s will to put them to death.

Intercession for our loved ones is important and severe punishment by God can be averted if only we pray and intercede on their behalf for their sins.

Ezek 22:30 “I looked for a man among them who would build up the wall and stand before me in the gap on behalf of the land so I would not have to destroy it, but I found none.

We could learn a few things from Job’s response. Firstly, he acknowledges the fact that humans come into this world naked. In other words, whatever we have are gifts from the Lord.

Application : Think of all the things you now have which you did not have when you came into this world as a baby. Thank God that all these things are gifts from Him.

Secondly, Job knows well enough not to put too much emphasis on what we have while we are on earth as we will not be able to carry them away when we die. Everyone will depart naked.

Thirdly, Job lost his possessions and family but he still acknowledged God’s sovereign authority over everything God had given him.

Application : Think about one incident in our life which we feel that God has been unfair and unkind to us. Confess the sin to God and affirm that God has the right to whatever He so pleases.

Rom 8:28 And we know that in all things God works for the good of those who love him, who have been called according to his purpose.

After Job has praised God, Satan pestered God to allow him to afflict Job physically and God agreed. In his physical misery, Job began to question God. Finally God answered and His reply silenced Job. In essence God asked Job a series of questions that made Job realized his lack of understanding. God is telling Job that if he does not understand the physical universe, what right does he have to question God’s governing of the moral universe.

Job 42:1-3 (NIV) Then Job replied to the LORD: 2 “I know that you can do all things; no plan of yours can be thwarted. 3 You asked, ‘Who is this that obscures my counsel without knowledge?’ Surely I spoke of things I did not understand, things too wonderful for me to know.

Job openly and honestly faced God and admitted that he had been foolish. Job could have given the excuse that since he had been afflicted so badly, it is natural for him to complain; but Job did not. Likewise, we should not always give excuses for our sins but rather take responsibilities for them and ask God to forgive us.

Solomon
Hannah - Getting what you want
Jacob