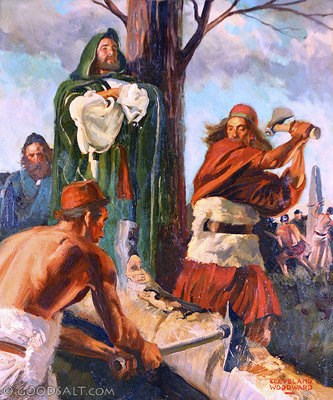 Destroyed all forms of idolatry

Hezekiah boldly destroyed altars, idols, and pagan temples. Even the bronze snake Moses had made in the wilderness was not spared because it had ceased to point the people to God and had also become an idol.

2 Kings 18:3He did what was pleasing in the Lord’s sight, just as his ancestor David had done. 4 He removed the pagan shrines, smashed the sacred pillars, and knocked down the Asherah poles. He broke up the bronze serpent that Moses had made, because the people of Israel had begun to worship it by burning incense to it.

The bronze serpent had been made to cure the Israelites of the bite of poisonous snakes (Numbers 21:4-9). It demonstrated God’s presence and power and reminded the people of his mercy and forgiveness. But it had become an object of worship instead of a reminder of whom to worship, so Hezekiah was forced to destroy it.

We may not be guilty of something as serious as worshipping objects but to a lesser degree we sometimes dwell too much on objects associated with God, rather than concentrate on God. For example, a church may idolize its pastor so much that God loses the glory. Or it may trust its collection of tithe so much that it forgets that its main dependence is on God. On a personal level, we can sometimes be guilty of putting too much confidence on Bible knowledge or Biblical reference materials that we own and forget to depend on God for revealing His truths.

2 Kings 18: 13 In the fourteenth year of King Hezekiah’s reign, King Sennacherib of Assyria came to attack the fortified cities of Judah and conquered them. 14King Hezekiah sent this message to the king of Assyria at Lachish: “I have done wrong. I will pay whatever tribute money you demand if you will only go away.” The king of Assyria then demanded a settlement of more than eleven tons of silver and about one ton of gold. 15 To gather this amount, King Hezekiah used all the silver stored in the Temple of the Lord and in the palace treasury. 16Hezekiah even stripped the gold from the doors of the Lord’s Temple and from the doorposts he had overlaid with gold, and he gave it all to the Assyrian king.

Surely King Hezekiah knows that God will not be pleased with his stipping the gold from the doors of the Temple and giving it to a pagan king. Yet Hezekiah did it because he was more afraid of man than of God. And he would rather obey man than God. We are warned against both these two things in the Bible.

(Acts 5:29) Peter and the other apostles replied: “We must obey God rather than men!

What do we do when we are asked to do something that we know would displease the Lord? Do we dare to say “no” and risk offending the person or would we rather do it and offend God? It is easier to choose the latter because if we offend the person, the response is immediate. If we offend God, we don’t see the consequences immediately. We also think that God is compassionate and forgiving and therefore He may overlook our sins. We have to know that while the consequences do not come immediately, it will surely come. God is not just a God of love, He is also a God of justice. And He has promised that we will reap what we sow in due time (Gal 6:7)

Let’s choose to obey God and fear Him rather than men. We can ask God to help us to find favor with men so that we will not offend them when we choose to go God’s way.

Showed little interest or wisdom in planning for the future

Although he had a natural inclination to respond to present problems, Hezekiah’s life shows little evidence of concern about the future. He took few actions to preserve the effects of his sweeping reforms.

When Isaiah informed Hezekiah of the foolishness of his act, the king’s answer displayed his persistent lack of foresight-he was thankful that any evil consequences would be delayed until after he died.

Do we live for the future or are we so preoccupied with the present that we do not care about the future? One way to find out is to write down a list of things that we are busy with everyday. How many of those things have material and eternal value? Do we spend 90% of our free time on recreation and 10% doing God’s work? Are we spending our money on ourselves or do we lay up treasures in heaven by spending on causes that will impact for eternity?

His successful efforts made him proud. His unwise display of wealth to the Babylonian delegation got Judah included on Babylon’s “Nations to Conquer” list.

Later in his life he became very ill and the Lord healed him but he forgot that all goodness comes from God.

2 Chron 32:24About that time, Hezekiah became deathly ill. He prayed to the LORD, who healed him and gave him a miraculous sign. 25But Hezekiah did not respond appropriately to the kindness shown him, and he became proud. So the LORD’s anger came against him and against Judah and Jerusalem.

We can become proud because of what God has given us, for example, wealth, good job, good looks, etc. Hezekiah was guilty of the same thing. He forgot God’s goodness. Let’s not be guilty of this. What are we proud of? Continually thank God for all these because giving thanks to God and telling about His goodness to others are sure ways to avoid pride.