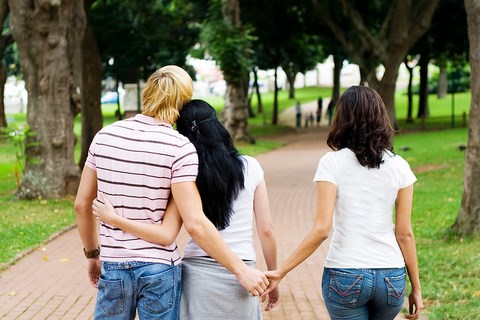 (Lev 20:10 NIV)  “‘If a man commits adultery with another man’s wife–with the wife of his neighbor–both the adulterer and the adulteress must be put to death.

(Prov 2:16-18 NIV)  It will save you also from the adulteress, from the wayward wife with her seductive words, {17} who has left the partner of her youth and ignored the covenant she made before God. {18} For her house leads down to death and her paths to the spirits of the dead.

Pro 6:24  It can keep you away from bad women, from the seductive words of other men’s wives.

Pro 6:25  Don’t be tempted by their beauty; don’t be trapped by their flirting eyes.

Pro 6:26  A man can hire a prostitute for the price of a loaf of bread, but adultery will cost him all he has.

Pro 6:27  Can you carry fire against your chest without burning your clothes?

Pro 6:28  Can you walk on hot coals without burning your feet?

Pro 6:29  It is just as dangerous to sleep with another man’s wife. Whoever does it will suffer.

A person who commits adultery is as good as signing a death warrant on himself. We must remember God’s stern warning against adultery.

A person who commits adultery forgets his sacred vows

(Prov 2:16-17 NIV) …the wayward wife with her seductive words, {17} who has left the partner of her youth and ignored the covenant she made before God.

Our marriage vows are sacred. They are not just words we say to a human being. They are promises made in the sight of God. A person who commits adultery has not only lied to his partner; he has lied to God.

Lying to God comes with severe penalties. In the book of Acts, people were struck dead for lying to God.

(Acts 5:4-5 NIV)  Didn’t it belong to you before it was sold? And after it was sold, wasn’t the money at your disposal? What made you think of doing such a thing? You have not lied to men but to God.” {5} When Ananias heard this, he fell down and died. And great fear seized all who heard what had happened.

Committing adultery in your heart

(Mat 5:27-28 NIV)  “You have heard that it was said, ‘Do not commit adultery.’ {28} But I tell you that anyone who looks at a woman lustfully has already committed adultery with her in his heart.

(2 Sam 11:2-4 NIV)  One evening David got up from his bed and walked around on the roof of the palace. From the roof he saw a woman bathing. The woman was very beautiful, {3} and David sent someone to find out about her. The man said, “Isn’t this Bathsheba, the daughter of Eliam and the wife of Uriah the Hittite?” {4} Then David sent messengers to get her. She came to him, and he slept with her. (She had purified herself from her uncleanness.) Then she went back home.

The adultery always starts from the eyes. Once your eyes have seen someone you want to possess, it stays in your heart and if not controlled, the action is carried out.

The way to prevent this is therefore to avoid the first stage. Avoid staring at people who will attract you physically and cause you to sin. The solution provided by Jesus is to pluck out your eyes. Of course we know this is a hyperbole (a figure of speech that overemphasizes the truth), but the message is clear: take drastic steps to prevent sin at the first stage, the eyes.

(Mat 5:28-29 NIV)  But I tell you that anyone who looks at a woman lustfully has already committed adultery with her in his heart. {29} If your right eye causes you to sin, gouge it out and throw it away. It is better for you to lose one part of your body than for your whole body to be thrown into hell.

(Mal 2:16 New Living Translation)  16“For I hate divorce!” says the Lord, the God of Israel. “It is as cruel as putting on a victim’s bloodstained coat,” says the Lord Almighty. “So guard yourself; always remain loyal to your wife.”

The reason why divorce is so detestable to God is because we are trying to tear apart what God had already joined as one flesh.

(Mat 19:3-6 NIV)  Some Pharisees came to him to test him. They asked, “Is it lawful for a man to divorce his wife for any and every reason?” {4} “Haven’t you read,” he replied, “that at the beginning the Creator ‘made them male and female,’ {5} and said, ‘For this reason a man will leave his father and mother and be united to his wife, and the two will become one flesh’? {6} So they are no longer two, but one. Therefore what God has joined together, let man not separate.”

Jesus said that divorce is not permissible except for unfaithfulness. This does not mean that divorce should automatically occur when a spouse commits adultery. The word translated “unfaithful” implies a sexually immoral life-style, not a confessed and repented act of adultery. Those who discover that their partner has been unfaithful should first make every effort to forgive, reconcile, and restore their relationship. We are always to look for reasons to restore the marriage relationship rather than for excuses to leave it. (Life Application Bible)

Going to a prostitute is adultery

Pro 6:26  A man can hire a prostitute for the price of a loaf of bread, but adultery will cost him all he has.

(1 Cor 6:15-20 NIV)  Do you not know that your bodies are members of Christ himself? Shall I then take the members of Christ and unite them with a prostitute? Never! {16} Do you not know that he who unites himself with a prostitute is one with her in body? For it is said, “The two will become one flesh.” {17} But he who unites himself with the Lord is one with him in spirit. {18} Flee from sexual immorality. All other sins a man commits are outside his body, but he who sins sexually sins against his own body. {19} Do you not know that your body is a temple of the Holy Spirit, who is in you, whom you have received from God? You are not your own; {20} you were bought at a price. Therefore honor God with your body.

The Bible warns against going to prostitutes. Some people think that they will not have to pay the consequences of this sin because nobody will find out. But nothing is in secret when it comes to God. We can be sure that if we harbor secret sins, God will bring it to light one day.

No other gods
Honoring your parents
Keeping the Sabbath holy