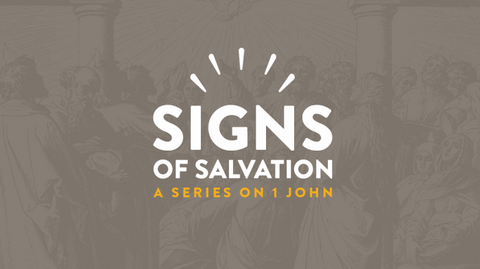 The author of this epistle never identified himself by name, but Christians since the beginning of the church have considered this letter authoritative, believing it was written by John the apostle. In addition, the author states that he is an eyewitness to the life and ministry of Jesus and that “what we have seen and heard we proclaim to you also” (1 John 1:3).

As he did in his gospel, John stated with clarity the purpose of his first letter. His purpose was to teach them more about what it means to be genuine saved so that his readers could have assurance of salvation.

1 John 5:13 I write these things to you who believe in the name of the Son of God so that you may know that you have eternal life.

As in the book of 2 Peter, false teachers had also creeped into the church and John felt obligated to re-state the right teachings especially with regard to such an important topic as salvation.

1 John 2:4 Whoever says, “I know him,” but does not do what he commands is a liar, and the truth is not in that person.

1 John 3:6 No one who lives in him keeps on sinning. No one who continues to sin has either seen him or known him.

1 John 5:18 We know that anyone born of God does not continue to sin; the One who was born of God keeps them safe, and the evil one cannot harm them.

The book of 1 John reiterates the teachings in James that genuine salvation is always accompanied by a changed life. This is not to say that a Christian no longer sins. But he no longer “keeps on sinning” or “continues to sin”. He may fall into sin but the Holy Spirit in him will draw him back. A person who drifts so far from God as to have no conscience when sinning should examine if his faith is genuine.

Philippians 3:7 But whatever were gains to me I now consider loss for the sake of Christ. 8 What is more, I consider everything a loss because of the surpassing worth of knowing Christ Jesus my Lord, for whose sake I have lost all things. I consider them garbage, that I may gain Christ…

Salvation that was not genuine

1 John 2:19 They went out from us, but they did not really belong to us. For if they had belonged to us, they would have remained with us; but their going showed that none of them belonged to us.

Some people believe that the teaching about “preservation of the saints” means that once you are saved you can never lose your salvation. That is not true. Salvation is the result of genuine faith and if you lose faith you will lose your salvation. Preservation of the saints means that if a person’s faith is genuine, he will never lose his salvation and no power in hell can snatch them out of God’s hand because God will work to preserve his salvation.
​
A person who is genuinely a Christian may fall into sin, even doubt at times, but he will come back to the Lord. Someone who falls away permanently may not have been saved in the first place. His faith is not genuine and when he encounters problems he loses it. John describes this type of people in the verses above.