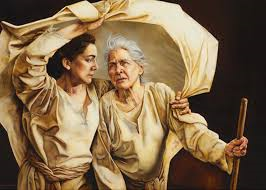 (Ruth 1:3-5 NIV)  Now Elimelech, Naomi’s husband, died, and she was left with her two sons. {4} They married Moabite women, one named Orpah and the other Ruth. After they had lived there about ten years, {5} both Mahlon and Kilion also died, and Naomi was left without her two sons and her husband.

Naomi wanted to return back to her hometown in Moab and asked her two daughter-in-laws to go back to their own hometown.

(Ruth 1:6-8 NIV)  When she heard in Moab that the LORD had come to the aid of his people by providing food for them, Naomi and her daughters-in-law prepared to return home from there. {7} With her two daughters-in-law she left the place where she had been living and set out on the road that would take them back to the land of Judah. {8} Then Naomi said to her two daughters-in-law, “Go back, each of you, to your mother’s home. May the LORD show kindness to you, as you have shown to your dead and to me.

But Ruth refused to part with her mother-in-law Naomi. Despite the fact that her problems may be alleviated if she goes back to her hometown and finds another husband, she was prepared to choose the path of sacrifice. She placed the needs Naomi above her own.

In our valley experiences, it is very easy to be preoccupied with ourselves. But we need to follow the example of Ruth and even put the needs of others above our own.

(Ruth 1:16-17 NIV)  But Ruth replied, “Don’t urge me to leave you or to turn back from you. Where you go I will go, and where you stay I will stay. Your people will be my people and your God my God. {17} Where you die I will die, and there I will be buried. May the LORD deal with me, be it ever so severely, if anything but death separates you and me.”

This reminds me of the incident when Jesus was on the cross. In the darkest moment of His life, He thought of His mother Mary and instructed His disciple to look after her after His death.

(John 19:26-27 NIV)  When Jesus saw his mother there, and the disciple whom he loved standing nearby, he said to his mother, “Dear woman, here is your son,” {27} and to the disciple, “Here is your mother.” From that time on, this disciple took her into his home.

Ruth had to pick leftover grain in the fields of Boaz in order to survive. The law expressly allowed the poor the right to glean in the fields (Lev 19:9-10; 23:22; Deut 24:19-21), but the owners of the fields were not always cooperative. A hard day’s work under the hot sun frequently netted only a small amount of grain (cf. Isa 17:5-6). Ruth seemed to be aware of the attitude of the landowners and hoped she would find a field to glean in where she would “find favor”.

(Ruth 2:2-3 NIV)  And Ruth the Moabitess said to Naomi, “Let me go to the fields and pick up the leftover grain behind anyone in whose eyes I find favor.” Naomi said to her, “Go ahead, my daughter.” {3} So she went out and began to glean in the fields behind the harvesters. As it turned out, she found herself working in a field belonging to Boaz, who was from the clan of Elimelech.

Verse 3 says “as it turned out”. On the surface, it was almost a coincidence that Ruth ended up gleaning the fields of Boaz, the man who would later become her husband. But this was no coincidence. Because Ruth was selfless while yet in her own valley, God honored her by quickly finding a husband for her and providing for her.

(Ruth 4:13 NIV)  So Boaz took Ruth and she became his wife. Then he went to her, and the LORD enabled her to conceive, and she gave birth to a son.

The Lord gave her conception; for the fruit of the womb is his reward, Psa_127:3. It is one of the keys He has in his hand; and He sometimes makes the barren woman that had been long so to be a joyful mother of children, Psa_113:9; Isa_54:1. Therefore, God provided food for Ruth, a husband and later a child. All because Ruth was selfless even in her valley experience.

But the greatest honor that God gave to Ruth was to make her the ancestor of Jesus Christ.