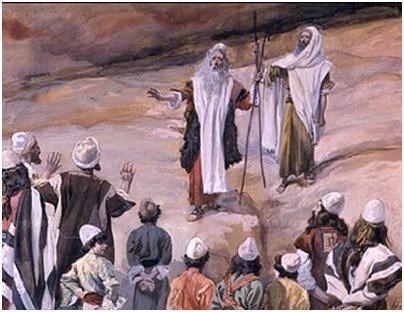 Moses was born of a Hebrew woman who wanted to save the child from extermination by Pharaoh. The baby was eventually found by an Egyptian princess who brought her up as her own son. Moses therefore led a good life in the palace of the princess.

(Exo 2:1-10 NIV)  Now a man of the house of Levi married a Levite woman, {2} and she became pregnant and gave birth to a son. When she saw that he was a fine child, she hid him for three months. {3} But when she could hide him no longer, she got a papyrus basket for him and coated it with tar and pitch. Then she placed the child in it and put it among the reeds along the bank of the Nile. {4} His sister stood at a distance to see what would happen to him. {5} Then Pharaoh’s daughter went down to the Nile to bathe, and her attendants were walking along the river bank. She saw the basket among the reeds and sent her slave girl to get it. {6} She opened it and saw the baby. He was crying, and she felt sorry for him. “This is one of the Hebrew babies,” she said. {7} Then his sister asked Pharaoh’s daughter, “Shall I go and get one of the Hebrew women to nurse the baby for you?” {8} “Yes, go,” she answered. And the girl went and got the baby’s mother. {9} Pharaoh’s daughter said to her, “Take this baby and nurse him for me, and I will pay you.” So the woman took the baby and nursed him. {10} When the child grew older, she took him to Pharaoh’s daughter and he became her son. She named him Moses, saying, “I drew him out of the water.”

All that changed when Moses killed an Egyptian one day. Pharaoh found out about it and Moses had to flee to the land of Midian where he became a shepherd tendering the flocks of his father-in-law Jethro.

(Exo 2:11-15 NIV)  One day, after Moses had grown up, he went out to where his own people were and watched them at their hard labor. He saw an Egyptian beating a Hebrew, one of his own people. {12} Glancing this way and that and seeing no one, he killed the Egyptian and hid him in the sand. {13} The next day he went out and saw two Hebrews fighting. He asked the one in the wrong, “Why are you hitting your fellow Hebrew?” {14} The man said, “Who made you ruler and judge over us? Are you thinking of killing me as you killed the Egyptian?” Then Moses was afraid and thought, “What I did must have become known.” {15} When Pharaoh heard of this, he tried to kill Moses, but Moses fled from Pharaoh and went to live in Midian, where he sat down by a well.

While Moses was in that valley experience, God paid him a visit.

(Exo 3:1-6 NIV)  Now Moses was tending the flock of Jethro his father-in-law, the priest of Midian, and he led the flock to the far side of the desert and came to Horeb, the mountain of God. {2} There the angel of the LORD appeared to him in flames of fire from within a bush. Moses saw that though the bush was on fire it did not burn up. {3} So Moses thought, “I will go over and see this strange sight–why the bush does not burn up.” {4} When the LORD saw that he had gone over to look, God called to him from within the bush, “Moses! Moses!” And Moses said, “Here I am.” {5} “Do not come any closer,” God said. “Take off your sandals, for the place where you are standing is holy ground.” {6} Then he said, “I am the God of your father, the God of Abraham, the God of Isaac and the God of Jacob.” At this, Moses hid his face, because he was afraid to look at God.

(Exo 3:7-10 NIV)  The LORD said, “I have indeed seen the misery of my people in Egypt. I have heard them crying out because of their slave drivers, and I am concerned about their suffering. {8} So I have come down to rescue them from the hand of the Egyptians and to bring them up out of that land into a good and spacious land, a land flowing with milk and honey–the home of the Canaanites, Hittites, Amorites, Perizzites, Hivites and Jebusites. {9} And now the cry of the Israelites has reached me, and I have seen the way the Egyptians are oppressing them. {10} So now, go. I am sending you to Pharaoh to bring my people the Israelites out of Egypt.”

In our valley experience, we feel that we got nothing to give. Perhaps we are tired emotionally or even financially drained. What can we possibly give towards God’s purpose? We cannot even manage our own problems? Why should we be solving other people’s problems. This inadequacy was something Moses felt as well.

(Exo 3:11-12 NIV)  But Moses said to God, “Who am I, that I should go to Pharaoh and bring the Israelites out of Egypt?” {12} And God said, “I will be with you. And this will be the sign to you that it is I who have sent you: When you have brought the people out of Egypt, you will worship God on this mountain.”

(Exo 4:10-11 NIV)  Moses said to the LORD, “O Lord, I have never been eloquent, neither in the past nor since you have spoken to your servant. I am slow of speech and tongue.” {11} The LORD said to him, “Who gave man his mouth? Who makes him deaf or mute? Who gives him sight or makes him blind? Is it not I, the LORD?

God overcame all his excuses. He did not deny any of Moses’ inadequacies but He promised that He would help Moses to overcome them.

With God’s help Moses managed to persuade Pharaoh to let the Israelites go. The next valley in Moses’ life came when the Israelites went against Moses and complained about why he had brought them out of Egypt. After all that Moses had done to get them out of slavery, the people turned against him.

(Exo 14:11-14 NIV)  They said to Moses, “Was it because there were no graves in Egypt that you brought us to the desert to die? What have you done to us by bringing us out of Egypt? {12} Didn’t we say to you in Egypt, ‘Leave us alone; let us serve the Egyptians’? It would have been better for us to serve the Egyptians than to die in the desert!” {13} Moses answered the people, “Do not be afraid. Stand firm and you will see the deliverance the LORD will bring you today. The Egyptians you see today you will never see again. {14} The LORD will fight for you; you need only to be still.”

Moses was full of faith at this point. He believed that God would do a miracle to deliver them out of the situation. If you are in the valley today, remember that God wants to work a miracle in the situation to deliver you out. Moses thought, however, that all he needed to do was pray. God had to tell him to stop crying out to Him and start doing his own part in the deliverance by moving. In your valley experience, are you doing all you can to deliver yourself out of it?

(Exo 14:15-16 NIV)  Then the LORD said to Moses, “Why are you crying out to me? Tell the Israelites to move on. {16} Raise your staff and stretch out your hand over the sea to divide the water so that the Israelites can go through the sea on dry ground.

The Lord also sent an angel to help Moses in his valley experience. The angel would move the clouds so that the Egyptians would be unable to find them. We also find that while Jesus was in the low point of His life in the Garden of Gethsemane, an angel came to strengthen Him.

(Luke 22:43 NIV)  An angel from heaven appeared to him and strengthened him.

The other thing to note about this valley experience is that the people of God walked through it. When we are in the valley, we sometimes lose hope and think that we will be in valley forever. That is not true because God is going to lead us out of it. He is going to help you to walk through it.

(Psa 23:4 NIV)  Even though I walk through the valley of the shadow of death, I will fear no evil, for you are with me; your rod and your staff, they comfort me.