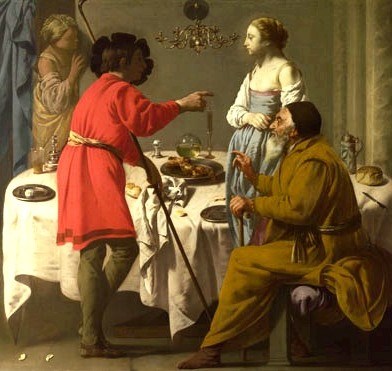 Jacob moved from being always looked after by his mother Rebekah to someone that was constantly being cheated.

Jacob worked hard for seven years so that he could marry Rachel, the girl he loved. But he was tricked by Rachel’s father, Laban who gave him Rachel’s sister Leah to be wedded. Jacob had to promise to work another seven years before Laban agreed to also give him Rachel as his wife.

(Gen 29:18-28 NIV)  Jacob was in love with Rachel and said, “I’ll work for you seven years in return for your younger daughter Rachel.” {19} Laban said, “It’s better that I give her to you than to some other man. Stay here with me.” {20} So Jacob served seven years to get Rachel, but they seemed like only a few days to him because of his love for her. {21} Then Jacob said to Laban, “Give me my wife. My time is completed, and I want to lie with her.” {22} So Laban brought together all the people of the place and gave a feast. {23} But when evening came, he took his daughter Leah and gave her to Jacob, and Jacob lay with her. {24} And Laban gave his servant girl Zilpah to his daughter as her maidservant. {25} When morning came, there was Leah! So Jacob said to Laban, “What is this you have done to me? I served you for Rachel, didn’t I? Why have you deceived me?” {26} Laban replied, “It is not our custom here to give the younger daughter in marriage before the older one. {27} Finish this daughter’s bridal week; then we will give you the younger one also, in return for another seven years of work.” {28} And Jacob did so. He finished the week with Leah, and then Laban gave him his daughter Rachel to be his wife.

During his years of working for Laban, Jacob was repeatedly cheated by him. In spite of that, Jacob became a rich man because the Lord was with him.

When Jacob was in the valley of his life, he realized that God was with him and that he would continue to prosper despite the circumstances.  During that whole time, he did not try to get even with the man who brought him misery. He continued to trust in God and let God take care of him.

(Gen 31:38-42 NIV)  “I have been with you for twenty years now. Your sheep and goats have not miscarried, nor have I eaten rams from your flocks. {39} I did not bring you animals torn by wild beasts; I bore the loss myself. And you demanded payment from me for whatever was stolen by day or night. {40} This was my situation: The heat consumed me in the daytime and the cold at night, and sleep fled from my eyes. {41} It was like this for the twenty years I was in your household. I worked for you fourteen years for your two daughters and six years for your flocks, and you changed my wages ten times. {42} If the God of my father, the God of Abraham and the Fear of Isaac, had not been with me, you would surely have sent me away empty-handed. But God has seen my hardship and the toil of my hands, and last night he rebuked you.”

The next valley in Jacob’s life was when he had to face Esau, his brother whom he deceived of his birthright and blessings. Esau came to greet him with an army of 400 men. This terrified Jacob greatly and he cried out to God. In his valley experience, he acknowledged that he was incapable of pulling himself out of it. Instead he beseeched God and reminded God of the promises He had made to him.

But Jacob did not just pray and do nothing else. He also took practical steps to improve the situation. He divided his family and belongings into two groups. This is not an indication of a lack of faith. The saying is worthy that “God help those who help themselves.”

(Gen 32:6-12 NIV)  When the messengers returned to Jacob, they said, “We went to your brother Esau, and now he is coming to meet you, and four hundred men are with him.” {7} In great fear and distress Jacob divided the people who were with him into two groups, and the flocks and herds and camels as well. {8} He thought, “If Esau comes and attacks one group, the group that is left may escape.” {9} Then Jacob prayed, “O God of my father Abraham, God of my father Isaac, O LORD, who said to me, ‘Go back to your country and your relatives, and I will make you prosper,’ {10} I am unworthy of all the kindness and faithfulness you have shown your servant. I had only my staff when I crossed this Jordan, but now I have become two groups. {11} Save me, I pray, from the hand of my brother Esau, for I am afraid he will come and attack me, and also the mothers with their children. {12} But you have said, ‘I will surely make you prosper and will make your descendants like the sand of the sea, which cannot be counted.'”

God heard the prayers of Jacob. Esau was no longer angry with him and the two brothers reconciled.

(Gen 33:1-4 NIV)  Jacob looked up and there was Esau, coming with his four hundred men; so he divided the children among Leah, Rachel and the two maidservants. {2} He put the maidservants and their children in front, Leah and her children next, and Rachel and Joseph in the rear. {3} He himself went on ahead and bowed down to the ground seven times as he approached his brother. {4} But Esau ran to meet Jacob and embraced him; he threw his arms around his neck and kissed him. And they wept.

Jacob was persistent when it came to asking God for blessings. He wrestled with a Man, who was the appearance of the Lord Jesus. He would not let the Man go until he receives a blessing from Him. Later God declared that Jacob struggled with God and overcome. We must pray until we get what we ask for. We must never give up.

(Gen 32:24-30 NIV)  So Jacob was left alone, and a man wrestled with him till daybreak. {25} When the man saw that he could not overpower him, he touched the socket of Jacob’s hip so that his hip was wrenched as he wrestled with the man. {26} Then the man said, “Let me go, for it is daybreak.” But Jacob replied, “I will not let you go unless you bless me.” {27} The man asked him, “What is your name?” “Jacob,” he answered. {28} Then the man said, “Your name will no longer be Jacob, but Israel, because you have struggled with God and with men and have overcome.” {29} Jacob said, “Please tell me your name.” But he replied, “Why do you ask my name?” Then he blessed him there. {30} So Jacob called the place Peniel, saying, “It is because I saw God face to face, and yet my life was spared.”