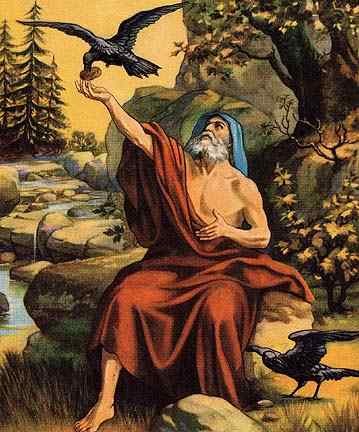 Elijah reached the pinnacle of his ministry when he contested with 450 prophets of Baal and prevailed because the Lord was with him.

(1 Ki 18:23-40 NIV)  Get two bulls for us. Let them choose one for themselves, and let them cut it into pieces and put it on the wood but not set fire to it. I will prepare the other bull and put it on the wood but not set fire to it. {24} Then you call on the name of your god, and I will call on the name of the LORD. The god who answers by fire–he is God.” Then all the people said, “What you say is good.” {25} Elijah said to the prophets of Baal, “Choose one of the bulls and prepare it first, since there are so many of you. Call on the name of your god, but do not light the fire.” {26} So they took the bull given them and prepared it. Then they called on the name of Baal from morning till noon. “O Baal, answer us!” they shouted. But there was no response; no one answered. And they danced around the altar they had made. {27} At noon Elijah began to taunt them. “Shout louder!” he said. “Surely he is a god! Perhaps he is deep in thought, or busy, or traveling. Maybe he is sleeping and must be awakened.” {28} So they shouted louder and slashed themselves with swords and spears, as was their custom, until their blood flowed. {29} Midday passed, and they continued their frantic prophesying until the time for the evening sacrifice. But there was no response, no one answered, no one paid attention. {30} Then Elijah said to all the people, “Come here to me.” They came to him, and he repaired the altar of the LORD, which was in ruins. {31} Elijah took twelve stones, one for each of the tribes descended from Jacob, to whom the word of the LORD had come, saying, “Your name shall be Israel.” {32} With the stones he built an altar in the name of the LORD, and he dug a trench around it large enough to hold two seahs of seed. {33} He arranged the wood, cut the bull into pieces and laid it on the wood. Then he said to them, “Fill four large jars with water and pour it on the offering and on the wood.” {34} “Do it again,” he said, and they did it again. “Do it a third time,” he ordered, and they did it the third time. {35} The water ran down around the altar and even filled the trench. {36} At the time of sacrifice, the prophet Elijah stepped forward and prayed: “O LORD, God of Abraham, Isaac and Israel, let it be known today that you are God in Israel and that I am your servant and have done all these things at your command. {37} Answer me, O LORD, answer me, so these people will know that you, O LORD, are God, and that you are turning their hearts back again.” {38} Then the fire of the LORD fell and burned up the sacrifice, the wood, the stones and the soil, and also licked up the water in the trench. {39} When all the people saw this, they fell prostrate and cried, “The LORD–he is God! The LORD–he is God!” {40} Then Elijah commanded them, “Seize the prophets of Baal. Don’t let anyone get away!” They seized them, and Elijah had them brought down to the Kishon Valley and slaughtered there.

After this dramatic victory, Elijah sank into the valley of his life when he realized that Jezebel wanted his life for killing all the prophets of Baal.

(1 Ki 19:1-4 NIV)  Now Ahab told Jezebel everything Elijah had done and how he had killed all the prophets with the sword. {2} So Jezebel sent a messenger to Elijah to say, “May the gods deal with me, be it ever so severely, if by this time tomorrow I do not make your life like that of one of them.” {3} Elijah was afraid and ran for his life. When he came to Beersheba in Judah, he left his servant there, {4} while he himself went a day’s journey into the desert. He came to a broom tree, sat down under it and prayed that he might die. “I have had enough, LORD,” he said. “Take my life; I am no better than my ancestors.”

Elijah was totally honest with God. He told God he felt like dying. He told God he could not take it any longer. If you look at the valley experiences of other biblical characters, you can see that many of them cry their hearts out to God. The Bible does not teach us to bottle everything inside. We have a God who wants us to be real with Him. To tell him exactly how we feel.

(1 Ki 19:5-9 NIV)  Then he lay down under the tree and fell asleep. All at once an angel touched him and said, “Get up and eat.” {6} He looked around, and there by his head was a cake of bread baked over hot coals, and a jar of water. He ate and drank and then lay down again. {7} The angel of the LORD came back a second time and touched him and said, “Get up and eat, for the journey is too much for you.” {8} So he got up and ate and drank. Strengthened by that food, he traveled forty days and forty nights until he reached Horeb, the mountain of God. {9} There he went into a cave and spent the night. And the word of the LORD came to him: “What are you doing here, Elijah?”

Another important factor that helped in Elijah’s recovery from the valley was that he refreshed himself physically. He had food and water and much rest. Sometimes we sink into the valley simply because we are too tired physically. We must take time to rest. The God who created us knows our make-up. That is why He instituted the Sabbath rest day.

After that there was a great demonstration of power by God. He wants Elijah to know that while he is weak and tired, God is not. He is every bit as powerful despite all the encounters with the false gods. We need to be reminded of God’s power while we are in the valley.

(1 Ki 19:10 NIV)  He replied, “I have been very zealous for the LORD God Almighty. The Israelites have rejected your covenant, broken down your altars, and put your prophets to death with the sword. I am the only one left, and now they are trying to kill me too.”

(1 Ki 19:18 NIV)  Yet I reserve seven thousand in Israel–all whose knees have not bowed down to Baal and all whose mouths have not kissed him.”

Elijah had a distorted image of reality when he was in the valley. He thought he was all alone. God had to remind him that he was not alone. There are as many as 7,000 people who are still worshipping the true God.

God also helped Elijah get out of his valley by giving him a helper, Elisha. When you are totally maxed out, ask God to give you additional resources to help you to get through.

(1 Ki 19:19-21 NIV)  So Elijah went from there and found Elisha son of Shaphat. He was plowing with twelve yoke of oxen, and he himself was driving the twelfth pair. Elijah went up to him and threw his cloak around him. {20} Elisha then left his oxen and ran after Elijah. “Let me kiss my father and mother good-by,” he said, “and then I will come with you.” “Go back,” Elijah replied. “What have I done to you?” {21} So Elisha left him and went back. He took his yoke of oxen and slaughtered them. He burned the plowing equipment to cook the meat and gave it to the people, and they ate. Then he set out to follow Elijah and became his attendant.