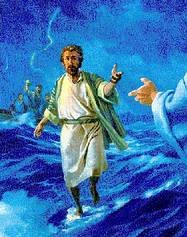 Peter imposed this trial upon himself when he asked Jesus for permission to walk on water towards Him. Sometimes we are put into trials in which we do not have a choice. Sometimes we choose to take on challenges in order to accomplish something. By doing so, we are imposing trials upon ourselves.

Peter managed to walk on water towards Jesus but when he saw the wind he became afraid and started to sink. He did not sink when his eyes were upon Jesus but when his eyes shifted their focus onto the wind, he started to sink. We may have taken on a challenge in life because we have received a promise from God. God may have promised us success in a business endeavour and we have moved into the venture in faith. But even with the commission of God, things are not guaranteed to go smoothly. When Peter walked on water, the wind and storm did not stop rolling. When we focus on our problems and not on God, we will sink like Peter. We need to focus on God and on the promises that He has given us. When we do that we do not fall even though the winds continue to beat. It was not the wind that caused Peter to sink; it was his lack of focus on God.

Peter’s denial of Jesus is the trial that he was famous for. In a sense, this denial may be more astounding than that of Judas because we have no record of expressions of loyalty or affection from Judas such as we have from Peter.

Even the strongest saint may fall at times. What is important is that Peter got up from his failure. He rebounded to become one of the early church’s great leaders. We may have been very enthusiastic about Christ at some point but now have gone so cold as to even deny Him. This need not be the end of the story. We can rebound like Peter to follow Christ again.

(Luke 22:31-34 NIV)  “Simon, Simon, Satan has asked to sift you as wheat. {32} But I have prayed for you, Simon, that your faith may not fail. And when you have turned back, strengthen your brothers.” {33} But he replied, “Lord, I am ready to go with you to prison and to death.” {34} Jesus answered, “I tell you, Peter, before the rooster crows today, you will deny three times that you know me.”

Simon Peter’s trial had to do with the work of the devil. Satan has asked permission from God to try Peter. God allowed him to be tried but strengthened him so that his faith will not fail. God does not exempt us from trials but we can pray to God that we will finish well.

(Mat 26:69-75 NIV)  Now Peter was sitting out in the courtyard, and a servant girl came to him. “You also were with Jesus of Galilee,” she said. {70} But he denied it before them all. “I don’t know what you’re talking about,” he said. {71} Then he went out to the gateway, where another girl saw him and said to the people there, “This fellow was with Jesus of Nazareth.” {72} He denied it again, with an oath: “I don’t know the man!” {73} After a little while, those standing there went up to Peter and said, “Surely you are one of them, for your accent gives you away.” {74} Then he began to call down curses on himself and he swore to them, “I don’t know the man!” Immediately a rooster crowed. {75} Then Peter remembered the word Jesus had spoken: “Before the rooster crows, you will disown me three times.” And he went outside and wept bitterly.

The story of Peter had a happy ending. He did not remain in a state of denial. He eventually became one of the leaders of the early church and preached the gospel of Christ with much boldness. Jesus did not give up on Peter after he had failed miserably. He gave him another chance to reaffirm (coincidentally three times also?) that he loved Jesus.