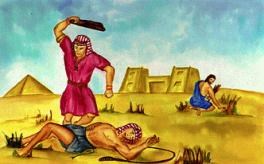 (Exo 2:11-12 NIV)  One day, after Moses had grown up, he went out to where his own people were and watched them at their hard labor. He saw an Egyptian beating a Hebrew, one of his own people. {12} Glancing this way and that and seeing no one, he killed the Egyptian and hid him in the sand.

Moses was given a choice. Does he want to stand with his people, who are the persecuted lot, or does he want to identify himself with the Egyptians, who are persecuting his own people? Moses chose the former and as a result he had to run away from the Pharaoh and endure 40 years in the desert.

In life we are also given that choice. Do we want to do God’s will and lead a more difficult life or do we want to follow the ways of the world and enjoy the luxuries of life. The Psalmist declared…

(Psa 84:10 NIV)  Better is one day in your courts than a thousand elsewhere; I would rather be a doorkeeper in the house of my God than dwell in the tents of the wicked.

It is not easy when God calls us to do His will. Sometimes it takes us out of our comfort zone. But there is fulfilment in being the centre of God’s will. We should not look back at what the world can offer.

(Heb 11:24-26 NIV)  By faith Moses, when he had grown up, refused to be known as the son of Pharaoh’s daughter. {25} He chose to be mistreated along with the people of God rather than to enjoy the pleasures of sin for a short time. {26} He regarded disgrace for the sake of Christ as of greater value than the treasures of Egypt, because he was looking ahead to his reward.

The next trial of Moses is to see God’s destiny unfold in his life. He must have felt so full of purpose when he stood up to defend a fellow Hebrew. But for that act, he had to flee to the wilderness and for forty years tend sheep. He went from being son of Pharaoh’s daughter to a shepherd. How many times he must have wondered: Is this what God intended for my life? To be a shepherd? Do I not have any greater calling? We can feel this way too. We may have fallen into a position of obscurity and wonder whether we are destined to remain this way.

This was the case until God called Moses one day by appearing to him in a burning bush. When the time is right, God’s purposes for him is revealed. He who was tending sheep for forty years as a faithful shepherd is now qualified to tend God’s own sheep – the people of Israel.

When we read the story of the Israelites in the wilderness for forty years, we see time and again Moses’ display of great patience. When the people grumbled, he did not. Would he have been able to withstand the harshness of the wilderness if he had not first been allowed to experience it for forty years? How differently would he have reacted if he went from the palace straight to the wilderness? Would he not be even more spoilt that the Israelites? If he had not been a shepherd, would he know what it means to lead millions of people, whose characteristics God would describe as being like sheep?

Our time of obscurity is never wasted time if we are living in God’s will. No matter how insignificant our position is, there are things God wants us to learn and he can use us for bigger things if we are patient to let him mould our life and character.