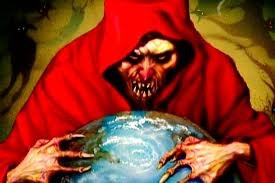 2 Corinthians 4:4 (NIV) The god of this age (ie Satan) has blinded the minds of unbelievers, so that they cannot see the light of the gospel of the glory of Christ, who is the image of God.

Matthew 13:19 (NIV) When anyone hears the message about the kingdom and does not understand it, the evil one comes and snatches away what was sown in his heart. This is the seed sown along the path.

Acts 26:18 (NIV) to open their eyes and turn them from darkness to light, and from the power of Satan to God, so that they may receive forgiveness of sins and a place among those who are sanctified by faith in me.’

Different types of strongholds
Physical obstacles to the gospel

(Acts 12:6-8 NIV) The night before Herod was to bring him to trial, Peter was sleeping between two soldiers, bound with two chains, and sentries stood guard at the entrance. {7} Suddenly an angel of the Lord appeared and a light shone in the cell. He struck Peter on the side and woke him up. “Quick, get up!” he said, and the chains fell off Peter’s wrists. {8} Then the angel said to him, “Put on your clothes and sandals.” And Peter did so. “Wrap your cloak around you and follow me,” the angel told him.

You may not be put in prison so that you cannot preach the gospel. There may be other means that the devil is obstructing you. Ask God to remove any hindrance and obstacle.

Jesus teaches the importance of binding the strong man (the demons) before stealing their possessions (souls).

Matthew 12:29 (NIV) “Or again, how can anyone enter a strong man’s house and carry off his possessions unless he first ties up the strong man? Then he can rob his house.

Where is the power base of Satan? Where are the temples, mosques?

Strongholds of the mind

2 Corinthians 10:3­5 (NIV) For though we live in the world, we do not wage war as the world does. 4 The weapons we fight with are not the weapons of the world. On the contrary, they have divine power to demolish strongholds. 5 We demolish arguments and every pretension that sets itself up against the knowledge of God, and we take captive every thought to make it obedient to Christ.

Spiritual mapping is nothing more than a method to allow us to pray more specifically.

Some of the strongholds the enemy was using was deeply rooted in the actions of past generations.

Mark on the map locations of non-Christian religious activity such as temples, mosques, etc.

Mark out areas of demonic activities.

Mark out areas of “sinful” places.

Jeremiah 1:10 (NIV) See, today I appoint you over nations and kingdoms to uproot and tear down, to destroy and overthrow, to build and to plant.”

(Acts 19:19-20 NIV) A number who had practiced sorcery brought their scrolls together and burned them publicly. When they calculated the value of the scrolls, the total came to fifty thousand drachmas. {20} In this way the word of the Lord spread widely and grew in power.

Demonic forces inhabit many of these objects of demonic worship and can prevent people from seeing the truth. When these are gotten rid of, many people can come to know Christ. That is why it is necessary to explain to our friends who do not know Jesus that some practices are occultic and they should rid themselves of demonic objects. In this way they can be free to see the truth.

When a people renounce their ties to false gods, they make it exceeding undesirable for the enemy to remain in the community.

Humans are given dominion over the land.

(Gen 1:27-28 NIV)  So God created man in his own image, in the image of God he created him; male and female he created them. {28} God blessed them and said to them, “Be fruitful and increase in number; fill the earth and subdue it. Rule over the fish of the sea and the birds of the air and over every living creature that moves on the ground.”

We have a choice to turn this dominion over to either God or the demons.

(Luke 4:18-19 NIV)  “The Spirit of the Lord is on me, because he has anointed me to preach good news to the poor. He has sent me to proclaim freedom for the prisoners and recovery of sight for the blind, to release the oppressed, {19} to proclaim the year of the Lord’s favor.”

Jesus’ ministry is one of releasing souls from the grip of Satan.

Luke 4:16­21 (NIV) He went to Nazareth, where he had been brought up, and on the Sabbath day he went into the synagogue, as was his custom. And he stood up to read. 17 The scroll of the prophet Isaiah was handed to him. Unrolling it, he found the place where it is written: 18 “The Spirit of the Lord is on me, because he has anointed me to preach good news to the poor. He has sent me to proclaim freedom for the prisoners and recovery of sight for the blind, to release the oppressed, 19 to proclaim the year of the Lord’s favour.” 20 Then he rolled up the scroll, gave it back to the attendant and sat down. The eyes of everyone in the synagogue were fastened on him, 21 and he began by saying to them, “Today this scripture is fulfilled in your hearing.”

Through signs and wonders

John 14:11 (NIV) Believe me when I say that I am in the Father and the Father is in me; or at least believe on the evidence of the miracles themselves.

John 9:30­33 (NIV) The man answered, “Now that is remarkable! You don’t know where he comes from, yet he opened my eyes. 31 We know that God does not listen to sinners. He listens to the godly man who does his will. 32 Nobody has ever heard of opening the eyes of a man born blind. 33 If this man were not from God, he could do nothing.”

Acts 9:36­42 (NIV) In Joppa there was a disciple named Tabitha (which, when translated, is Dorcas ), who was always doing good and helping the poor. 37 About that time she became sick and died, and her body was washed and placed in an upstairs room. 38 Lydda was near Joppa; so when the disciples heard that Peter was in Lydda, they sent two men to him and urged him, “Please come at once!” 39 Peter went with them, and when he arrived he was taken upstairs to the room. All the widows stood around him, crying and showing him the robes and other clothing that Dorcas had made while she was still with them. 40 Peter sent them all out of the room; then he got down on his knees and prayed. Turning toward the dead woman, he said, “Tabitha, get up.” She opened her eyes, and seeing Peter she sat up. 41 He took her by the hand and helped her to her feet. Then he called the believers and the widows and presented her to them alive. 42 This became known all over Joppa, and many people believed in the Lord.

When someone is in need of a miracle, it often provides a very good opportunity to ask God to prove himself real through the miracle. Many who will not believe through other means will readily believe if they experience the miracle for themselves.

This may also backfire if we have prayed for the person and still nothing happens. Therefore, we have to take such opportunities seriously. Get as many people to pray as possible. Go on a fast. Treat this as a serious opportunity to win or lose the person.

(Acts 2:43 NIV) Everyone was filled with awe, and many wonders and miraculous signs were done by the apostles.

(Acts 3:1-9 NIV) One day Peter and John were going up to the temple at the time of prayer–at three in the afternoon. {2} Now a man crippled from birth was being carried to the temple gate called Beautiful, where he was put every day to beg from those going into the temple courts. {3} When he saw Peter and John about to enter, he asked them for money. {4} Peter looked straight at him, as did John. Then Peter said, “Look at us!” {5} So the man gave them his attention, expecting to get something from them. {6} Then Peter said, “Silver or gold I do not have, but what I have I give you. In the name of Jesus Christ of Nazareth, walk.” {7} Taking him by the right hand, he helped him up, and instantly the man’s feet and ankles became strong. {8} He jumped to his feet and began to walk. Then he went with them into the temple courts, walking and jumping, and praising God. {9} When all the people saw him walking and praising God…

(Acts 14:3) The apostles stayed there a long time, preaching boldly about the grace of the Lord. The Lord proved their message was true by giving them power to do miraculous signs and wonders.

The ministry of the disciples were filled with signs and wonders. They healed many people in Jesus’ name. Naturally people came to believe in Jesus because of that. It is one thing to argue about the authenticity of Jesus and another thing to demonstrate that through healing. People believed because they could experience the power of God and the love of God as their needs are being met.

Christians today should also demonstrate the reality of God through signs and wonders and miraculous healing. These phenomena is not only for the early church. Jesus told us that those who minister in His name would be able to do all these things as well.

(Mark 16:17-18 NIV) And these signs will accompany those who believe: In my name they will drive out demons; they will speak in new tongues; {18} they will pick up snakes with their hands; and when they drink deadly poison, it will not hurt them at all; they will place their hands on sick people, and they will get well.”

Acts 13:6­12 (NIV) They travelled through the whole island until they came to Paphos. There they met a Jewish sorcerer and false prophet named Bar­Jesus, 7 who was an attendant of the proconsul (ie governor), Sergius Paulus. The proconsul, an intelligent man, sent for Barnabas and Saul because he wanted to hear the word of God. 8 But Elymas the sorcerer (for that is what his name means) opposed them and tried to turn the proconsul from the faith. 9 Then Saul, who was also called Paul, filled with the Holy Spirit, looked straight at Elymas and said, 10 “You are a child of the devil and an enemy of everything that is right! You are full of all kinds of deceit and trickery. Will you never stop perverting the right ways of the Lord? 11 Now the hand of the Lord is against you. You are going to be blind, and for a time you will be unable to see the light of the sun.” Immediately mist and darkness came over him, and he groped about, seeking someone to lead him by the hand. 12 When the proconsul saw what had happened, he believed, for he was amazed at the teaching about the Lord.

How to pray Warfare Prayers
Blessings and Curses
Angels, Satan and Demons