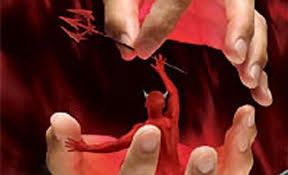 What authority do we have
Authority over evil spirits

Spiritual warfare must be conducted from a position of victory. In other words, we claim the victory that Christ has already won for us.

Matthew 16:18 (NIV) And I tell you that you are Peter, and on this rock I will build my church, and the gates of Hades will not overcome it.

Colossians 2:15 (NIV) And having disarmed the powers and authorities, he made a public spectacle of them, triumphing over them by the cross.

Mark 6:7 (NIV) Calling the Twelve to him, he sent them out two by two and gave them authority over evil spirits.

(Psa 8:5-6 NIV)  You made him a little lower than the heavenly beings and crowned him with glory and honor. {6} You made him ruler over the works of your hands; you put everything under his feet:

(Gen 1:27-28 NIV)  So God created man in his own image, in the image of God he created him; male and female he created them. {28} God blessed them and said to them, “Be fruitful and increase in number; fill the earth and subdue it. Rule over the fish of the sea and the birds of the air and over every living creature that moves on the ground.”

(Mat 7:28-29 NIV)  When Jesus had finished saying these things, the crowds were amazed at his teaching, {29} because he taught as one who had authority, and not as their teachers of the law.

(Mat 28:18-20 NIV)  Then Jesus came to them and said, “All authority in heaven and on earth has been given to me. {19} Therefore go and make disciples of all nations, baptizing them in the name of the Father and of the Son and of the Holy Spirit, {20} and teaching them to obey everything I have commanded you. And surely I am with you always, to the very end of the age.”

(Mat 10:1 NIV)  He called his twelve disciples to him and gave them authority to drive out evil spirits and to heal every disease and sickness.

Authority to do miracles

(John 2:18-19 NIV)  Then the Jews demanded of him, “What miraculous sign can you show us to prove your authority to do all this?” {19} Jesus answered them, “Destroy this temple, and I will raise it again in three days.”

Authority to build others

(2 Cor 10:8 NIV)  For even if I boast somewhat freely about the authority the Lord gave us for building you up rather than pulling you down, I will not be ashamed of it.

(2 Cor 13:10 NIV)  This is why I write these things when I am absent, that when I come I may not have to be harsh in my use of authority–the authority the Lord gave me for building you up, not for tearing you down.

Authority to bless and curse

Jesus blessed people regularly when He came into their presence, with the Hebrew greeting Shalom, which means peace.

(John 20:19 NIV)  On the evening of that first day of the week, when the disciples were together, with the doors locked for fear of the Jews, Jesus came and stood among them and said, “Peace be with you!”

(John 20:26 NIV)  A week later his disciples were in the house again, and Thomas was with them. Though the doors were locked, Jesus came and stood among them and said, “Peace be with you!”

He commanded His disciples to bless people’s households in the same way when He sent them out to minister.

(Luke 6:28 NIV)  bless those who curse you, pray for those who mistreat you.

(John 20:23 NIV)  If you forgive anyone his sins, they are forgiven; if you do not forgive them, they are not forgiven.”

(Titus 2:15 NIV)  These, then, are the things you should teach. Encourage and rebuke with all authority. Do not let anyone despise you.

Jesus did no mighty works before the Holy Spirit came upon Him during His baptism. He lived such an ordinary life before that time that when He began to assert His authority in ministry, the people of His hometown were amazed (Matt 13:54-57).

Yet after the Holy Spirit had descended upon Jesus, He received authority to invade the kingdom of darkness.

(Luke 4:18-19 NIV)  “The Spirit of the Lord is on me, because he has anointed me to preach good news to the poor. He has sent me to proclaim freedom for the prisoners and recovery of sight for the blind, to release the oppressed, {19} to proclaim the year of the Lord’s favor.”

We can receive the anointing of the Holy Spirit on our lives by asking the leaders in the church to pray for us.

(Acts 8:15-17 NIV)  When they arrived, they prayed for them that they might receive the Holy Spirit, {16} because the Holy Spirit had not yet come upon any of them; they had simply been baptized into the name of the Lord Jesus. {17} Then Peter and John placed their hands on them, and they received the Holy Spirit.

(Mat 28:18-20 NIV)  Then Jesus came to them and said, “All authority in heaven and on earth has been given to me. {19} Therefore go and make disciples of all nations, baptizing them in the name of the Father and of the Son and of the Holy Spirit, {20} and teaching them to obey everything I have commanded you. And surely I am with you always, to the very end of the age.”

Jesus has been given all authority in heaven and on earth. The Great Commission has to be understood within this context. Because Jesus has the authority, therefore we can go out to make disciples of all nations. We could not have done it if Jesus does not have the authority or if that authority had not been given to us.

Jesus accomplished a lot during His time on earth. He did so with authority. Jesus has given us the same authority to carry out the same ministry.

(Mark 16:17-18 NIV)  And these signs will accompany those who believe: In my name they will drive out demons; they will speak in new tongues; {18} they will pick up snakes with their hands; and when they drink deadly poison, it will not hurt them at all; they will place their hands on sick people, and they will get well.”

These signs will follow every believer. It did not say that they are meant only for apostles or evangelists or famous Christians. Another thing to note is that we receive this authority in Jesus’ name.

(James 5:14 NIV)  Is any one of you sick? He should call the elders of the church to pray over him and anoint him with oil in the name of the Lord.

(Acts 3:6 NIV)  Then Peter said, “Silver or gold I do not have, but what I have I give you. In the name of Jesus Christ of Nazareth, walk.”

Even in our modern society, we understand the importance of using the name of someone powerful. Imagine having to persuade your peers at the office to do something. You probably need to give some good reasons before they will do it. On the other hand if it is the boss who wants it done and you simply tell them to do it because the boss wants it, it is done with no questions asked.

(1 Sam 17:45-47 NIV)  David said to the Philistine, “You come against me with sword and spear and javelin, but I come against you in the name of the LORD Almighty, the God of the armies of Israel, whom you have defied. {46} This day the LORD will hand you over to me, and I’ll strike you down and cut off your head. Today I will give the carcasses of the Philistine army to the birds of the air and the beasts of the earth, and the whole world will know that there is a God in Israel. {47} All those gathered here will know that it is not by sword or spear that the LORD saves; for the battle is the Lord’s, and he will give all of you into our hands.”

Like David we need to declare the defeat of the enemy.

(James 5:15 NIV)  And the prayer offered in faith will make the sick person well; the Lord will raise him up. If he has sinned, he will be forgiven.

The church leader could exercise spiritual authority over the sickness only if he has faith.

Even Jesus’ authority was released when it was met with faith.

Move in accordance with the will of God

Jesus demonstrated great authority while He was on earth. Yet He acknowledged that He did all these great works on His Father’s authority.

(John 5:30 NIV)  By myself I can do nothing; I judge only as I hear, and my judgment is just, for I seek not to please myself but him who sent me.

He further explained that He could exercise so much authority because He only does what is in His Father’s will.

We know that Jesus could be so aligned to the Father’s will because He spent so much time with His Father.

Acting in authority vs prayer

While ministering to the people, Jesus did not ask the Father to do the job. With His Father’s authority He simply spoke and it was done.

(Luke 4:38-39 NIV)  Jesus left the synagogue and went to the home of Simon. Now Simon’s mother-in-law was suffering from a high fever, and they asked Jesus to help her. {39} So he bent over her and rebuked the fever, and it left her. She got up at once and began to wait on them.

Authority is given to the righteous

(James 5:16 NIV)  Therefore confess your sins to each other and pray for each other so that you may be healed. The prayer of a righteous man is powerful and effective.

Who has spiritual authority?
​How much authority does the devil have?

Spiritual warfare and the Christian life
How to pray Warfare Prayers
Angels, Satan and Demons