Should you use apologetics in evangelism? 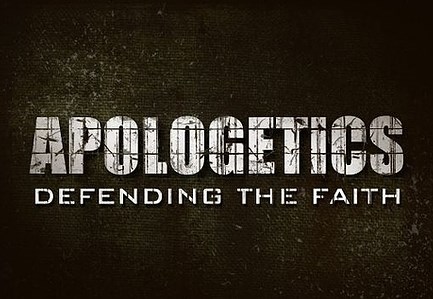 Defending the faith is our responsibility

(1 Pet 3:15-16 NIV)  But in your hearts set apart Christ as Lord. Always be prepared to give an answer to everyone who asks you to give the reason for the hope that you have. But do this with gentleness and respect,

(1 Sam 12:7 NIV)  Now then, stand here, because I am going to confront you with evidence before the LORD as to all the righteous acts performed by the LORD for you and your fathers.

God expects us to reason

(Isa 1:18 NIV)  “Come now, let us reason together,” says the LORD. “Though your sins are like scarlet, they shall be as white as snow; though they are red as crimson, they shall be like wool.

Having faith doesn’t mean that we kiss goodbye to our brains. On the contrary, man is expected to reason. For example, God expects man to reason and come to the conclusion that He exists by looking at His creation.

Romans 1:20 (NIV) For since the creation of the world God’s invisible qualities ­­his eternal power and divine nature­­ have been clearly seen, being understood from what has been made, so that men are without excuse.

To God, the universe is enough proof that He exists. No one would believe that a watch would fall into place all by itself. Yet many people choose to believe that the earth, which is far more intricate, comes about purely by chance. The earth contains enough evidence of God’s design. If the earth were smaller, an atmosphere would not be possible (like Mercury and the moon) and life would therefore be non-existent. If it were bigger, the atmosphere would contain free hydrogen (like Jupiter and Saturn) and life would also not be possible. Its distance from the sun has also to be just right – even a small change would make it too hot or too cold.

Therefore, the Bible encourages reasoning as a ground for faith. However, it should not become a substitute of faith. In other words, we must not have the attitude that we want to reason out everything and do away with faith. Rather, we reason out want we can based on what God has revealed to us. Beyond that we rely on faith.

Jesus encourages His audience to reason

Jesus also encourages his spectators to reason that He is God because only God could do those miracles that Jesus was doing.

John 14:11 (NIV) Believe me when I say that I am in the Father and the Father is in me; or at least believe on the evidence of the miracles themselves.

Paul encourages us to use apologetics

1 Peter 3:15 (NIV) But in your hearts set apart Christ as Lord. Always be prepared to give an answer to everyone who asks you to give the reason for the hope that you have. But do this with gentleness and respect,

Paul appealed to his audience through reasoning that this Christ is the true Messiah because he was raised from the dead, a fact that could be substantiated by witnesses.

Acts 10:39 “We are witnesses of everything he did in the country of the Jews and in Jerusalem. They killed him by hanging him on a tree, 40 but God raised him from the dead on the third day and caused him to be seen.

(Acts 2:22-24 NIV) “Men of Israel, listen to this: Jesus of Nazareth was a man accredited by God to you by miracles, wonders and signs, which God did among you through him, as you yourselves know. {23} This man was handed over to you by God’s set purpose and foreknowledge; and you, with the help of wicked men, put him to death by nailing him to the cross. {24} But God raised him from the dead, freeing him from the agony of death, because it was impossible for death to keep its hold on him.

(Acts 4:1-4 NIV) The priests and the captain of the temple guard and the Sadducees came up to Peter and John while they were speaking to the people. {2} They were greatly disturbed because the apostles were teaching the people and proclaiming in Jesus the resurrection of the dead. {3} They seized Peter and John, and because it was evening, they put them in jail until the next day. {4} But many who heard the message believed, and the number of men grew to about five thousand.

The ministry of the early Christians was mainly apologetical. They did not just tell people about the salvation message; they spent considerable time trying to convince them with proofs that what they are preaching is indeed true. They argued that Jesus is the Messiah because He could resurrect Himself from the dead.

The Apostle Paul was the early church’s great missionary to the world and he came into contact with men of many nations and different cultural and religious backgrounds. I believe we can learn much from the following passage that briefly describes the method of approach he used among the Jews of Thessalonica:

And Paul went in, as was his custom, and for three weeks he argued with them from the scriptures, explaining and proving that it was necessary for the Christ to suffer and to rise from the dead, and saying, “This Jesus, whom I proclaim to you, is the Christ”. Acts 17.2-3.

There are three points that are mentioned in this passage that are of considerable relevance to our subject and we shall examine them briefly in order. Firstly, we read that for three weeks he argued with them. He entered freely into debate and discussion with them on the whole subject of his message, being quite willing to put its veracity to the test of scrutiny and critical analysis. This was nothing exceptional, in fact it was the rule in his contacts with the Jews, and there is clear evidence that he took the initiative in creating debate and dialogue with them. At Ephesus he entered the synagogue “and for three months spoke boldly, arguing and pleading about the kingdom of God” (Acts 19.8) and, when the Jews opposed him, he went to the Gentiles and “argued daily in the hall of Tyrannus” (Acts 19.9).

Josh McDowell is a fine example of someone who comes to know Jesus through searching for truth and reasoning. Josh started out with the intention to prove once and for all to all Christians that the Bible cannot be the true word of God. It is with substantial amounts of research that he finally had to admit that the Bible is indeed the word of God and Jesus did in fact resurrect from the dead. People who come to Christ using the head usually come out as stronger Christians. Feelings can change over time and a person can fall out of faith later on in life when he no longer feels right about Christianity. Facts have the advantage of being unchangeable and independent of feelings.

Apologetics is laying the groundwork

The gospel is what we must base our witnessing efforts on. There can be no salvation apart from a person accepting Jesus as his Savior and these truths are only taught in the Bible. Yet in order to arrive at the stage whereby the person will accept Jesus or the Bible, some groundwork is often necessary.

I wonder what would happen if Jesus said these words to the woman right at the outset. What would happen if instead of asking for water, explaining about living water, talking about her husband, Jesus jumps straight into declaring to her that He was the Messiah? I think the woman would think Jesus was mad. We would too if a stranger come to us and tell us that he is the Messiah.

But before Jesus declared that He was the Messiah, He showed His warmth towards the woman and showed His exceptional ability to know the details of her life and about religious matters. Therefore the woman would not be shocked to hear later that Jesus was the Messiah.

It does not mean that it is unspiritual if we use logic to convince someone to believe and not rely on the “pure” Word of God. All knowledge belongs to God and the Christian should be free to use whatever knowledge be it science, archaeology, history, etc to win souls for Christ.

Logic is not a substitute for faith. However, the Bible encourages reasoning as a ground for faith as can be seen from verses like Rom 1:20 when God says that He expects humans to look at the creation and deduce from logic that He exists. However, it should not become a substitute of faith. In other words, we must not have the attitude that we want to reason out everything and do away with faith. Rather, we reason out want we can based on what God has revealed to us. Beyond that we rely on faith.

Background informationNames have occupied a significant place in Bible times. People’s names were changed to reflect some calling from God or a significant event in their lives. No wonder Moses

Samson had great God-given ability. Yet he did not use it to the fullest. We can learn from Samson’s mistakes as well as pick up some good points from his