Should We Make Images of Mary and the other Saints? 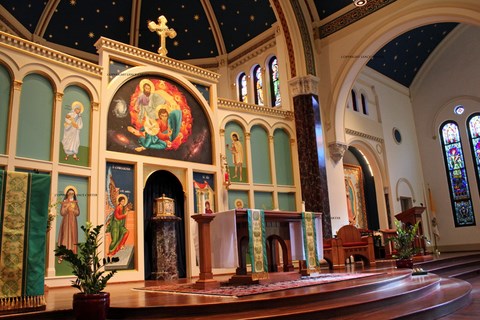 Roman Catholics believe that the images of Christ, Mary and the other saints are to be kept, especially in churches, and due honour and respect are to be given to them. Two passages are quoted to support the use of images.

Exodus 25:18­19 (NIV) And make two cherubim out of hammered gold at the ends of the cover. 19 Make one cherub on one end and the second cherub on the other; make the cherubim of one piece with the cover, at the two ends.

Numbers 21:9 (NIV) So Moses made a bronze snake and put it up on a pole. Then when anyone was bitten by a snake and looked at the bronze snake, he lived.

Protestants believe that the use of images is prohibited. The cherubim described in Exodus 25:18­19 were not adored or respected or even seen by the people. They were in the Holy of Holies into which no one was supposed to enter except the high priest, himself permitted to enter only once a year (on the Day of Atonement), and only with the proper precaution.

The brazen serpent described in Numbers 21:9 is rather a proof against the use of images. In fact, King Hezekiah later broke the serpent when the people burnt incense before it (2 Kings 18:4).

The use of images is strictly disallowed in the Bible.

Deuteronomy 5:7­9 (NIV) “You shall have no other gods before me. 8 “You shall not make for yourself an idol in the form of anything in heaven above or on the earth beneath or in the waters below. 9 You shall not bow down to them or worship them; for I, the LORD your God, am a jealous God, punishing the children for the sin of the fathers to the third and fourth generation of those who hate me,

Deuteronomy 4:15­16 (NIV) You saw no form of any kind the day the LORD spoke to you at Horeb out of the fire. Therefore watch yourselves very carefully, 16 so that you do not become corrupt and make for yourselves an idol, an image of any shape, whether formed like a man or a woman…

The meaning of the word “repentance”.Lk 13:3 I tell you, no! But unless you repent, you too will all perish. (NIV) Mk 1:4 And so John came, baptizing in the