Skip to content
Home > Detailed discussion with Roman Catholics > Should We Invoke the Prayers of the Saints? 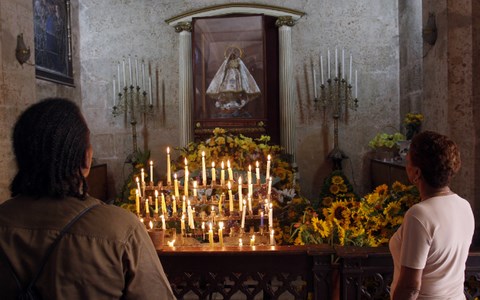 Roman Catholics believe that saints who reign with Christ offer up their own prayers to God for men. It is good and useful to invoke them, and to have recourse to their prayers in obtaining benefits from God. Even God commanded Abimelech to ask for Abraham’s prayers.

Genesis 20:7 (NIV) Now return the man’s (ie Abraham’s) wife, for he is a prophet, and he will pray for you and you will live. But if you do not return her, you may be sure that you and all yours will die.”

Catholics also believe that among the intercessors in heaven is one whose office, holiness and power with God place her far above the angels and Saints. She is the Holy Mary. Mary is pronounced “blessed among women” (Luke 1:28) and is to be called “blessed” (Luke 1:48). Mary is truly the Mother of God because her Son who took His human nature from her is truly God. Mary is also believed to be sinless as can be seen from the following verse.

Genesis 3:14­15 14 And the LORD God said unto the serpent, Because thou hast done this, thou art cursed above all cattle, and above every beast of the field; upon thy belly shalt thou go, and dust shalt thou eat all the days of thy life: 15 And I will put enmity between thee and the woman, and between thy seed and her seed; it shall bruise thy head, and thou shalt bruise his heel. (KJV)

Between Christ and Satan there is, and ever has been, an absolute and complete enmity and also between the woman (Mary) and Satan, which must mean that Mary was never under the stain of any sin whatsoever.

Protestants disagree that petitions to God should be made through the Saints. This is because the Saints, being mere creatures of God and not like God, cannot possibly listen to the many prayers addressed to them simultaneously in different countries, in different languages and many of them not expressed orally but only mentally. Only God, who is omnipresent (present everywhere) and omniscient (all knowing) can do that. It is incorrect to assume that a creature of God can possess the characteristics we use to describe God alone.

Genesis 20:7 does not prove that a person should pray to a dead saint to intercede for him, but only that Christians, while alive on earth, should pray for each other. Christians can only pray for one another but cannot mediate between God and man. Only Christ can.

1 Tim 2:5 For there is one God, and one mediator between God and men, the man Christ Jesus; (KJV)

Finally, Luke 16:27 also does not prove that we can pray to dead saints as this is not the case of a living person praying to a dead saint. The conduct of a dead man in hell should not be an example for us to follow. Besides, his prayers were of no effect.

The argument that we are not to pray to the Saints extends to Mary. Catholics agree that while they love and honour Mary, she is only a creature and is infinitely less than God. Given this, it is utterly impossible for her to listen to prayers by so many people simultaneously. Furthermore, the Bible does not teach that Mary is a special creature, higher in office than all other saints. Luke 1:28 and Luke 1:48 which describe Mary as “blessed” simply does so on the ground that she was chosen from among all other women to become the earthly mother of Jesus. It does not demonstrate that Mary hold certain powers. In one of Jesus’ teachings the same word “blessed” is used to describe nine categories of people, the merciful, the peacemakers, etc (Matthew 5:3­11).

The text of Genesis 3:14­15 also does not prove that Mary is sinless. The enmity between Satan and the woman arises as a result of Satan’s deception which caused the woman to be continually inflicted with pain of child-bearing (verse 16). The Bible clearly teaches that everyone (including Mary) sins.

Rom 5:12 Wherefore, as by one man sin entered into the world, and death by sin; and so death passed upon all men, for that all have sinned: (KJV)

Mary knew herself to be a sinner when she prayed to God her saviour.

In what sense is God her Savior if she had known no sin.

It is also not correct to address Mary as the “Mother of God”. This is because Mary is only the mother of Jesus’ human nature.

Rom 1:3 …regarding his Son, who as to his human nature was a descendant of David…

Jesus was called a descendant of David only because his human nature descended from David. As to his Godhood, He pre-existed David. Therefore, Mary can only be considered the mother of the human nature of Jesus. By giving the title “Mother of God”, it implies she is mother even of His Godhood.