Should the Apocryphal be included in the Bible? 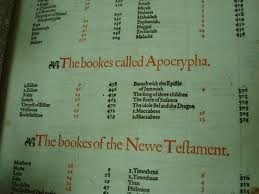 Today, the most noticeable difference between Catholic and Protestant versions of the Bible is the absence of seven whole books and parts of two others from the Protestant version. These are Tobias, Judith, Wisdom, Ecclesiaticus, Baruch, I & II Machabees. These books are what we call the apocryphal and it refers to certain books whose authenticity and authority were debated throughout the centuries. They were first declared to be Scripture by the Roman Catholic Church in the fourth century though the Protestant Church still rejects any divine authority attached to them.

Roman Catholics who attribute divine authority to these books and advocate them as Scripture argue that the writers of the New Testament quote mostly from the Septuagint (Greek Translation of the Hebrew Bible), which contains the apocryphal. They also cite the fact that some Church fathers, notably Iranaeus, Tertullian and Clement of Alexandra used the apocryphal in public worship and accepted them as Scripture. It is also pointed out that at Qumran, where the Dead Sea Scrolls (oldest copy of the Hebrew Old Testament we have) were discovered, some apocryphal books were discovered alongside other authentic Old Testament books.

Protestants argue that while the New Testament writers may quote from the Septuagint, which contains the apocryphal, they never once quoted the apocryphal.

Appealing to certain Church fathers as proof of the inspiration of the books is a weak argument, since just as many Church Fathers, notably Origen, Jerome, and Josephus, denied them as Scripture. Citing the presence of the apocryphal among the Old Testament fragments of the Dead Sea Scrolls also does not prove anything since other non-Scriptural documents were also found.

There are other good reasons why the apocryphal is rejected by the Protestant. Some contain demonstratable errors. Others may even be in direct opposite with the Scriptures.

The book of Machabees also lack the character of divine inspiration from God. For example, in 2 Maccabees 15:38,39 New Revised Standard Version, we read, “This, then is how matters turned out with Nicanor, and from that time the city had been in possession of the Hebrews. So I will here end my story. If it is well told and to the point, that is what I myself desired, if it is poorly done and mediocre, that was the best I could do.

9:12 I pray thee, I pray thee, O God of my father, and God of the inheritance of Israel, Lord of the heavens and earth, Creator of the waters, king of every creature, hear thou my prayer: 9:13 And make my speech and deceit to be their wound and stripe, who have purposed cruel things against thy covenant, and thy hallowed house, and against the top of Sion, and against the house of the possession of thy children.
​
Read more about how the books of the Old Testament were selected

Matthew 24:45-47 “Who then is the faithful and wise servant, whom the master has put in charge of the servants in his household to give them their food at the

Who is a leader?It is not true that only pastors or cell leaders are leaders in the Christian circle. We are all leaders in different ways. For example, a counselor