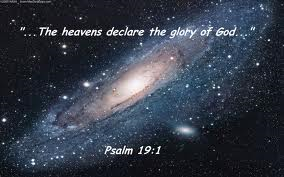 In this psalm, David meditates on God’s creation. As God reveals himself through nature (19:1-6), we learn about His power and His infiniteness. We are surrounded by fantastic displays of God’s craftsmanship—the heavens give dramatic evidence of his existence, his power, his love, his care. To say that the universe happened by chance is absurd. Its design, intricacy, and orderliness point to a personally involved Creator. As you look at God’s handiwork in nature and the heavens, thank him for such magnificent beauty and the truth it reveals about the Creator.

1  For the director of music. A psalm of David. The heavens declare the glory of God; the skies proclaim the work of his hands.

2  Day after day they pour forth speech; night after night they display knowledge.

3  There is no speech or language where their voice is not heard.

4  Their voice goes out into all the earth, their words to the ends of the world. In the heavens he has pitched a tent for the sun,

5  which is like a bridegroom coming forth from his pavilion, like a champion rejoicing to run his course.

6        It rises at one end of the heavens and makes its circuit to the other; nothing is hidden from its heat.