Prophecies Fulfilled in Our Current Day 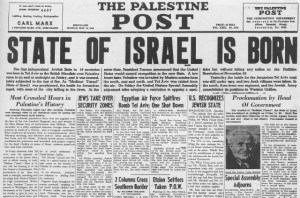 The rebirth of Israel is one of the most unlikely prophecies in the Bible. No other ancient nation ever ceased to exist for a period of centuries and then returned to take its place on the stage of world history.

(Isa 66:8 NIV)  Who has ever heard of such a thing? Who has ever seen such things? Can a country be born in a day or a nation be brought forth in a moment? Yet no sooner is Zion in labor than she gives birth to her children.

Most nations evolved gradually over the centuries. In the time of ancient prophecies, no one had ever witnessed a nation being created in one day. Yet Isaiah made that prophecy, that Israel will come into existence in one day. This prophecy was fulfilled precisely on May 15, 1948. 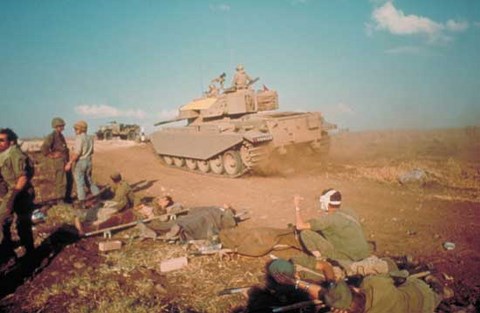 Three thousand years ago God inspired King David to predict that the reborn nation would be immediately surrounded by enemies, including the Arab nations of Jordan, Egypt, Saudi Arabia and Egypt.

(Psa 83:2-8 NIV)  See how your enemies are astir, how your foes rear their heads. {3} With cunning they conspire against your people; they plot against those you cherish. {4} “Come,” they say, “let us destroy them as a nation, that the name of Israel be remembered no more.” {5} With one mind they plot together; they form an alliance against you– {6} the tents of Edom and the Ishmaelites, of Moab and the Hagrites, {7} Gebal, Ammon and Amalek, Philistia, with the people of Tyre. {8} Even Assyria has joined them to lend strength to the descendants of Lot. Selah

In this incredible prophecy, King David described the modern states of Middle East by naming the ancient nations that have now joined with the Palestinians in their attempt to destroy the Jewish state in the last days.

Jews Returning to their homeland

In this incredible prophecy, King David described the modern states of Middle East by naming the ancient nations that have now joined with the Palestinians in their attempt to destroy the Jewish state in the last days.

The Bible predicted that many exiled Jews would return to their homeland.

(Zep 3:10 KJV)  From beyond the rivers of Ethiopia my suppliants, even the daughter of my dispersed, shall bring mine offering.

The Ethiopian Jews returned to the land of Israel after being separated from their brethren for almost three thousand years. In the later part of the 1980s and especially in 1991, over 85,000 black Jews returned home to Israel from Ethiopia in fulfillment of Zephaniah’s ancient prophecy.

(Isa 43:6 NIV)  I will say to the north, ‘Give them up!’ and to the south, ‘Do not hold them back.’ Bring my sons from afar and my daughters from the ends of the earth–

Here Isaiah prophesied the return of the Jews not only from Ethiopia (the south) but also Russia (the north). There are now a million Jews in Israel who came from Russia and the former Soviet Union.

restoration of the hebrew language 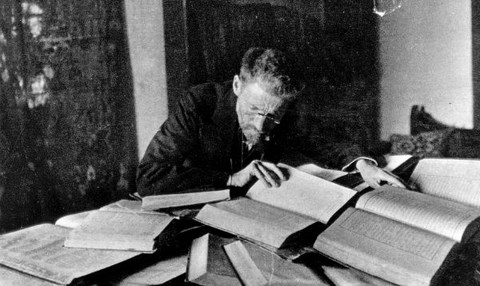 God predicted through His prophet Zephaniah that when the Israelites return after their period of judgment, they would be speaking a pure and unified language.

(Zep 3:9 NIV)  “Then will I purify the lips of the peoples, that all of them may call on the name of the LORD and serve him shoulder to shoulder.

This was fulfilled when God restored the ancient dead language of Hebrew as the living, spoken language of Israel. Hebrew ceased to be the common language of the Jews long before the birth of Christ. No other nation has ever lost its language and later recovered it. No one is speaking ancient Egyptian or Chaldee today.

A Jewish scholar by the name of Eliazer ben Yehuda began working early in the 20th century to revive the dead language of Hebrew with its original seven thousand words related to temple worship as used by the priests.

As the Jews began to return from seventy different nations in 1948 after two thousand years of exile, the government began to unify these widely divergent peoples into a united people through teaching them the revived Hebrew language.

The prophet Isaiah predicted that Israel would become fertile again.

(Isa 27:6 NIV)  In days to come Jacob will take root, Israel will bud and blossom and fill all the world with fruit.

Ezek 36:30   I will increase the fruit of the trees and the crops of the field, so that you will no longer suffer disgrace among the nations because of famine. 34  The desolate land will be cultivated instead of lying desolate in the sight of all who pass through it.

The returning Jews have transformed the previously deserted and desolate land into the most agriculturally efficient land on earth according to the United Nations. Israel now supplies over 90% of the citrus fruits consumed by hundreds of millions of Europeans. 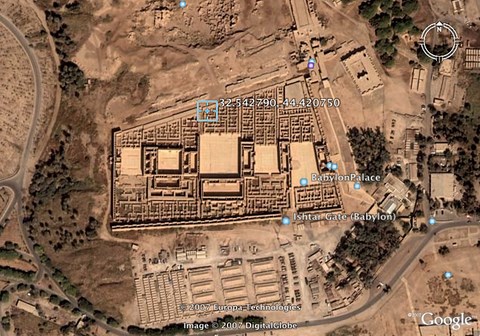 The Bible prophesied that the once great city of Babylon would be rebuilt and later destroyed by God in judgment.

(Isa 13:6 NIV)  Wail, for the day of the LORD is near; it will come like destruction from the Almighty.  19  Babylon, the jewel of kingdoms, the glory of the Babylonians’ pride, will be overthrown by God like Sodom and Gomorrah.

The Iraqi government of Saddam Hussein has spent much money rebuilding the ancient city of Babylon that now lies in ruins.

Because Babylon was built in ancient times, and was a great city, it must be a great city again in the time of our new great leader, Saddam Hussein.

Hussein plans to rebuild the hanging gardens, once considered one of the seven wonders of the world: he has offered a $1.5 million prize to any Iraqi who can devise a plan to irrigate the gardens using only the technology available in ancient Babylon. 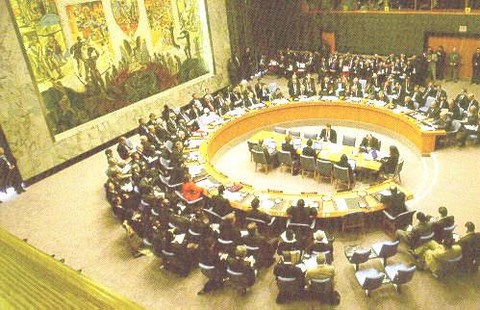 Over two thousand years ago the prophets Daniel and John described that there would be a world government led by the coming dictator in the last days, the Antichrist.

(Rev 13:7-8 NIV)  He was given power to make war against the saints and to conquer them. And he was given authority over every tribe, people, language and nation. {8} All inhabitants of the earth will worship the beast–all whose names have not been written in the book of life belonging to the Lamb that was slain from the creation of the world.

This can become a reality when global organizations are becoming more and more powerful, like the United Nations. The Anti-Christ will probably head one or more of these global organizations. The power of the United Nations has increased substantially through the years. Instead of functioning with a temporary army, it is now asking for a permanent and lethal force to act as deterrent against any potential aggressor nation (Article 43 of United Nations General Assembly Resolution). This powerful army will not be under the command of the elected Presidents of the respective countries but under the direct command of the Secretary-General of the United Nations.

President George Bush in the Chicago Tribune , September 12, 1990, said “Iraq is the first test for the new world order.” He stated emphatically that the Iraq War is Saddam Hussein against the world. The United Nation troops are continually referred to as the multi-nation forces.

mark of the beast 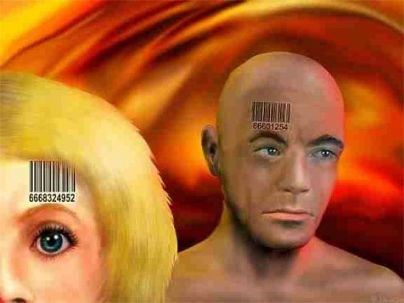 (Revelation 13:16-18)  He also forced everyone, small and great, rich and poor, free and slave, to receive a mark on his right hand or on his forehead, {17} so that no one could buy or sell unless he had the mark, which is the name of the beast or the number of his name. {18} This calls for wisdom. If anyone has insight, let him calculate the number of the beast, for it is man’s number. His number is 666.

In Revelation chapter 13, the Bible prophesies that a world dictator will soon rule over a world government. He will cause all people on the earth to receive a number without which they will be unable to buy or sell. We are seeing this prophecy fulfilled before our eyes in a most astonishing way. With the advancement of computers, every human being in the world can now been assigned a number, and many already have been. Under a United Nations proposal, every person in the world would be fingerprinted and registered under a universal identification scheme to fight illegal immigration and people smuggling.

Even our present bar code system that is on almost every item on sale is a precursor of the mark of the beast that we will see in the last days. In the bar code, different type of lines represent different numbers. There are three identical lines at every start, middle and end of a bar code. Those lines represent 6.

​The world is moving into a cashless society and in America, as much as 97% of the total money is cashless (i.e. electronic money). Many of our purchases are done with one’s personal identification mark, of either the credit card or the bankcard. We know that these physical cards have limitations as they can be lost, stolen or used in an unauthorized way by others.

People are now looking at ways to make these limitations disappear. One obvious way is to have the information embedded in one’s body. This is now a possibility and experiments have been carried out successful to embed a miniature computer chip under one’s skin. In the last days, the Anti-Christ will make it impossible for anyone to buy or sell if their personal marks do not include his mark i.e. if they do not submit their allegiance to him.

Is the human body a fit place for a microchip? The debate is no longer hypothetical. On Monday, Aug. 24, 1998, Professor Kevin Warwick, director of cybernetics at the University of Reading in the U.K., became the first human to host a microchip. During a 20-minute medical procedure doctors inserted into Warwick’s arm a glass capsule not much bigger than a pearl. The capsule holds several microprocessors.

According to the quran, Haman was prime minister for the pharaoh who ruled Egypt when Moses sought the deliverance of his people (Sura 28:8,38; 40:36). However, the Bible states that

If the Bible were the Word of God, we would expect it to be factually accurate. No archaeological discovery has ever proven wrong a Biblical reference. On the contrary, the