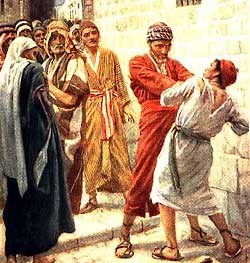 21 Then Peter came to Jesus and asked, “Lord, how many times shall I forgive my brother or sister who sins against me? Up to seven times?”

22 Jesus answered, “I tell you, not seven times, but seventy-seven times.[a]

23 “Therefore, the kingdom of heaven is like a king who wanted to settle accounts with his servants. 24 As he began the settlement, a man who owed him ten thousand bags of gold[b] was brought to him. 25 Since he was not able to pay, the master ordered that he and his wife and his children and all that he had be sold to repay the debt.

26 “At this the servant fell on his knees before him. ‘Be patient with me,’ he begged, ‘and I will pay back everything.’ 27 The servant’s master took pity on him, canceled the debt and let him go.

28 “But when that servant went out, he found one of his fellow servants who owed him a hundred silver coins.[c] He grabbed him and began to choke him. ‘Pay back what you owe me!’ he demanded.

29 “His fellow servant fell to his knees and begged him, ‘Be patient with me, and I will pay it back.’

30 “But he refused. Instead, he went off and had the man thrown into prison until he could pay the debt. 31 When the other servants saw what had happened, they were outraged and went and told their master everything that had happened.

32 “Then the master called the servant in. ‘You wicked servant,’ he said, ‘I canceled all that debt of yours because you begged me to. 33 Shouldn’t you have had mercy on your fellow servant just as I had on you?’ 34 In anger his master handed him over to the jailers to be tortured, until he should pay back all he owed.

35 “This is how my heavenly Father will treat each of you unless you forgive your brother or sister from your heart.”

What can we learn from the parables?

1. God has forgiven us of a very large debt.

The unmerciful servant was forgiven of a very large debt. One talent would purchase a slave; it is equivalent to 20 years’ wages for the average man. The unmerciful servant owed his master 10,000 talents! There was no indication that he could ever repay his debt if he is thrown into prison. It seems pretty impossible that one man could amass that much money to pay the debt.

1 Cor 6:20 you were bought at a price. Therefore honor God with your body.

God paid the highest price possible when He offered His only Son to die for our sins.

John 3:16 (NIV) “For God so loved the world that he gave his one and only Son, that whoever believes in him shall not perish but have eternal life.

2. The wrongs that people do to us are very small compared with what God has forgiven us of.

The unmerciful servant has a servant that owes him a hundred pence. That’s the equivalent of four month’s wages. While the absolute amount is not small, in comparison with what he has been forgiven of, it is too small for mention.

This parable teaches about forgiveness. It says that we who have been forgiven of a very large debt should likewise forgive others who only owed us a small debt.

Ephesians 4:32 (NIV) Be kind and compassionate to one another, forgiving each other, just as in Christ God forgave you.

The unmerciful servant could not forgive his servant for a small debt because he has Aforgotton@ that he has been forgiven of a big debt. That is why the verse above says that we forgave as Christ as forgiven us.

A practical way to help us to forgive others is to remind ourselves that whatever wrong has been done to us is only a hundred pence. But we have been forgiven of 10,000 talents. Not to extend forgiveness puts us into as guilty a position as the unmerciful servant whom we have learned to dislike. The punch of the parable is in the difference in the two amounts – 10,000 talents and 100 pence.

I believe that the parable is teaching that the one who is saved is someone who experienced God >s forgiveness and not just have head knowledge of it in his head. The unmerciful servant did not forget his being forgiven but he certainly did not experience it in his heart. The servant may have thought that he is so smart to negotiate his way out of the situation. He did not see the desparateness of the situation and the fact that his master forgave him not because of anything he has done but rather because of the master’s compassion. Because of that, the parable ended with him not being forgiven eventually.

Similarly the one who is forgiven of God’s wrath is one who understands that he is a sinner and that he can do nothing to repay God and earn His forgiveness. Rather he completely relies on God’s mercy to save him. He does not believe that he is in any way worthy of the forgiveness. Such a person is a truly forgiven person. And he can extend this forgiveness to others.

In the parable, both the unmerciful servant and his servant were forgiven because they repented and begged for forgiveness. Does that mean that we have the right not to forgive anyone who does not come to us for forgiveness?

In the Old Testament, we read of David asking God to punish his enemies.

Psa 3:7 Arise, O LORD! Deliver me, O my God! Strike all my enemies on the jaw; break the teeth of the wicked.

However, when we reach the New Testament, we get a different standard altogether. Stephen, while being stoned, could ask for the forgiveness of his persecutors.

Acts 7:59 While they were stoning him, Stephen prayed, “Lord Jesus, receive my spirit.” 60 Then he fell on his knees and cried out, “Lord, do not hold this sin against them.” When he had said this, he fell asleep.

And this new standard was set none other than our Lord Jesus Christ.

Luke 23:34 Jesus said, “Father, forgive them, for they do not know what they are doing.” And they divided up his clothes by casting lots.

We should try to strive for the higher standard.