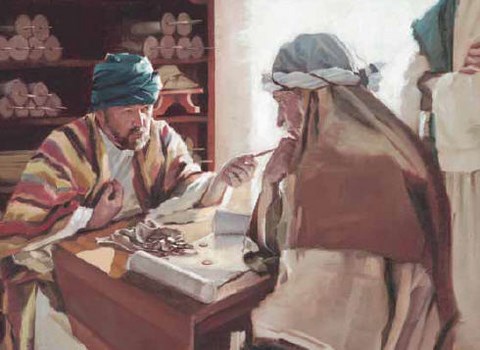 16 Jesus told his disciples: “There was a rich man whose manager was accused of wasting his possessions. 2 So he called him in and asked him, ‘What is this I hear about you? Give an account of your management, because you cannot be manager any longer.’

3 “The manager said to himself, ‘What shall I do now? My master is taking away my job. I’m not strong enough to dig, and I’m ashamed to beg— 4 I know what I’ll do so that, when I lose my job here, people will welcome me into their houses.’

5 “So he called in each one of his master’s debtors. He asked the first, ‘How much do you owe my master?’

“The manager told him, ‘Take your bill, sit down quickly, and make it four hundred and fifty.’

“‘A thousand bushels[b] of wheat,’ he replied.

“He told him, ‘Take your bill and make it eight hundred.’

8 “The master commended the dishonest manager because he had acted shrewdly. For the people of this world are more shrewd in dealing with their own kind than are the people of the light. 9 I tell you, use worldly wealth to gain friends for yourselves, so that when it is gone, you will be welcomed into eternal dwellings.

Why was the dishonest servant commended for his act of dishonesty? Verse 8 says that it was because he was shrewd. In other words, Jesus was not commending the dishonest servant because he was dishonest but for the shrewdness of his action. We have earlier seen that a parable is often used to illustrate one or two main truth. Not every detail of a parable is to be used to form a teaching. Likewise, Jesus may be using this story as an example of shrewdness without agreeing to his act of dishonesty.

Another interpretation is that the act of the servant was not in fact dishonest. Notice the Bible did not tell us that the act was dishonest. It simply tells us that the servant was dishonest. It could be that he was dishonest because he squandered the master’s wealth when the latter was not around. Many arrived at the conclusion that the act was dishonest after we read that the servant changed the amount the debtors owed the master. What if he had not done anything wrong by doing this? In those days, the amount that a debtor owed a creditor would be written as a lump sum on a piece of paper and this amount includes both the principal and interest. Therefore, the servant may be writing off only the interest component of the debt thereby not eating into the master’s principal. Is he allowed to do that? In many cases probably yes because he is the manager and the master may have left to him how much interest to charge. Or he may have charged extra interest for himself in view of his dishonesty and is now eliminating this part of the extra interest.

Yet a third interpretation concerns who the lord of this parable is. If we say that the lord of the parable is not Jesus but simply a rich man in the story, then Jesus is not really commending the servant for the dishonest act. This is also probable because Luke is the only gospel writer that uses contrasts to describe some truths. For example, parable of the friend at midnight (Luke 11), parable of the unjust judge (Luke 18). In both these parables, Jesus is not saying that God is like the friend or the unjust judge. Yet He uses the illustration to teach a truth. Therefore, in the parable of the friend at midnight and unjust steward, the two persons extended help just to get rid of a nuisance. But the Lord is not like them; He extends help because He cares. If those two people would extend help out of persistence, how much more the Lord who loves you. Likewise this may also be a parable of contrast. In other words, if the unbelievers could be so shrewd, how much more Christians in their use of money for eternal gains.

What is the parable trying to teach?

1. Christians have to be shrewd in their use of God-given possessions.

Luke 16:8­9 (NIV) “The master commended the dishonest manager because he had acted shrewdly. For the people of this world are more shrewd in dealing with their own kind than are the people of the light. 9 I tell you, use worldly wealth to gain friends for yourselves, so that when it is gone, you will be welcomed into eternal dwellings.

Christians are called to sow into the kingdom so that souls can be saved. However, we must not be naïve and put our money into any Christian organisation that comes our way. The parable says that the people of the world are very shrewd in how they handle their money and Christians likewise need to do the same. Thoroughly research the organisation you are giving to to make sure that it is one that is worthy of investing your money into for God’s kingdom.

2. We have to prove ourselves in small things before God will use us for big things.

Luke 16:10­12 (NIV) “Whoever can be trusted with very little can also be trusted with much, and whoever is dishonest with very little will also be dishonest with much. 11 So if you have not been trustworthy in handling worldly wealth, who will trust you with true riches? 12 And if you have not been trustworthy with someone else’s property, who will give you property of your own?

We sometimes think that when we have accumulated great wealth, we will use it for God’s kingdom. But God does not think that way. He wants us to be faithful in using the little He gives us before He gives us a great deal. So for those who are expecting the opposite, that day may never come. God is not looking for us to give into the kingdom a big amount on an absolute basis. (Remember the widow’s mite. How she gave so little on an absolute basis but that represented everything she has?) Rather God is looking for people who give sacrificially, an amount that is big to them on a proportionate basis.