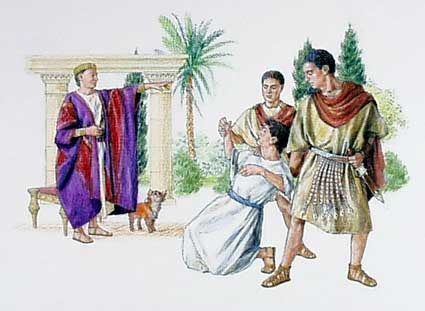 Everyone has been given something to be stewards of. How are we using the “talents” God has given us.

One of the servants got five talents, one got two and another one got one talent. (A talent is estimated to worth the equivalent of $1,000 today but the actual amount is not important.) In other words, everybody has something. Some Christians like to give the excuse that they are not gifted and therefore can be exempted from serving God. Yet the parable teaches that everyone has something from God to be stewards of and we have no excuse.

What are some of the things that God has made us stewards of?

Everybody has been given 24 hours a day and we will be accountable to God for how we spend this time. Many people have time to spend hours in front of the TV but no time when it comes to serving God. In the end, it all bolls down to where our heart is. Let’s ask ourselves how much time we are spending for ourselves and how much time we are spending for God. If we are not spending enough time for God, is there an area that we can serve God in?

When Jesus was on earth, He used His time with the primary aim of serving God. The gospel of Mark tells us that Jesus stayed up late into the night healing the sick and the demon possessed (v 1:32-34). After staying up half the night ministering to people, Jesus got up early next morning and went off to a solitary place to pray to His Father.

Let’s decide to use the time God has given us to serve Him. The area in which we serve God will depend on the skills God has given us. We will touch on this topic in greater detail below.

It is true there are many starving and impoverished people in the world but most of us (at least those who are reading this lesson) have been blessed with a reasonable standard of living. How are we fairing as stewards of God’s money.

How we view our money has tremendous impact on how we spent it. Job could give up his wealth because he knew that whatever we have is a gift from God.

The way we use our money also tells of how much we are trusting God for our daily needs. Jesus brought His disciples’ attention of a widow who could give everything she has and the reason she could do that was because she trusted God to provide for what she needs.

How are we using the money that God has given us? Are we spending only on ourselves or do we give to others who are less fortunate, who need the money more than we do? Do we give to the Church or to other organizations that work towards the extension of God’s kingdom?

God has given us skills or spiritual gifts that we can use for His glory. The Bible calls these gifts or manifestations of the Spirit. The next two passages give us a clue to the diversity of these gifts and provide a convenient list we can use to evaluate ourselves – to see if we think we have any of these gifts.

Romans 12:6­8 (NIV) We have different gifts, according to the grace given us. If a man’s gift is prophesying, let him use it in proportion to his faith. 7 If it is serving, let him serve; if it is teaching, let him teach; 8 if it is encouraging, let him encourage; if it is contributing to the needs of others, let him give generously; if it is leadership, let him govern diligently; if it is showing mercy, let him do it cheerfully.

How do we know what kinds of gifts/skills God has given us?

1. We come up with a list of possible gifts.

Some books on spiritual gifts also come with a questionnaire to gauge our spiritual gifts. There is nothing magical about such questionnaires. Many questions are targeted at what we enjoy and feel comfortable about doing. And it is highly likely that God will call us to serve Him in areas that we will enjoy and are good at.

Think about this. If God has a purpose for your life, and He is also your creator, wouldn’t He then create you so that you are best suited to carry out the purpose He has for you. God loves you and wants you to enjoy what you are doing and this is what the questionnaire is probing.

If we do not have access to a questionnaire, we can simply sit down and spend time thinking about what we enjoy doing or what we are good at doing. Then go through a list of areas in Church that we think we will enjoy serving in and will be good at.

2. Based on what we discovered from the list, we need to pray about it and see if God speaks to us about our gifts.

3. We can ask our friends for a confirmation. Very often we may think we have a gift when actually we do not. For example, we may think that we have the gift of teaching but when we teach, nobody understands. Therefore, checking with our friends on our gifts is very important.

The next step is to experiment with the gift. If you think that you may have the gift of teaching, ask for more opportunities to teach afterwards evaluate your own performance as well as get others to give you a feedback. If you consistently get negative feedback after trying very hard, maybe this is not one of your gifts after all.

We must us what God has given us. Not doing so displeases God.

Each of us have differing capabilities. But don’t be jealous of others.

The master gave each servant different amounts of talents – to one he gave five, to one he gave two and to the last he gave one. We have examined earlier that God gives to each person something to be stewards of. Yet not everyone receives an equal amount from God. We should not be jealous of what each person has been given. We should only be concerned with what we do with the things God has given us.

Notice that the servant who made two new talents out of two existing talents got equal praise from the master as the one who made five out of five talents. The master did not think that five was better than two. The compliments given to these two servants were exactly the same. The master was only concerned with the returns proportionate to what he had given the servants. In this case both generated 100% return and the master was equally pleased.

Jesus illustrated the same truth one day when he was at the temple.

(Mark 12:41-44 NIV) Jesus sat down opposite the place where the offerings were put and watched the crowd putting their money into the temple treasury. Many rich people threw in large amounts. {42} But a poor widow came and put in two very small copper coins, worth only a fraction of a penny. {43} Calling his disciples to him, Jesus said, “I tell you the truth, this poor widow has put more into the treasury than all the others. {44} They all gave out of their wealth; but she, out of her poverty, put in everything–all she had to live on.”

Jesus was more impressed with the widow who gave 100% of a very small amount than the people who gave a small percentage of a large amount.

Are you jealous of anyone in Church who has been given more gifts by God? Let’s confess our jealousy to God and ask God to help you to use whatever He has given you effectively instead.

If we are faithful over small things, God will give us the opportunity to do bigger things.

Some of us wish that God has given us bigger things to do than say, arranging chairs in church. We all wish we could be a Billy Graham evangelizing to millions of people. If that is our wish, one thing we should start doing is be faithful over the small task that God has given us. The parable is very clear that God will never give us something big to do if we don’t first prove ourselves faithful over small things.