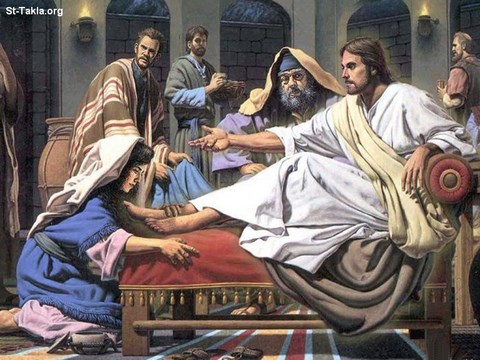 (Luke 7:36-50) Now one of the Pharisees invited Jesus to have dinner with him, so he went to the Pharisee’s house and reclined at the table. {37} When a woman who had lived a sinful life in that town learned that Jesus was eating at the Pharisee’s house, she brought an alabaster jar of perfume, {38} and as she stood behind him at his feet weeping, she began to wet his feet with her tears. Then she wiped them with her hair, kissed them and poured perfume on them. {39} When the Pharisee who had invited him saw this, he said to himself, “If this man were a prophet, he would know who is touching him and what kind of woman she is–that she is a sinner.” {40} Jesus answered him, “Simon, I have something to tell you.” “Tell me, teacher,” he said. {41} “Two men owed money to a certain moneylender. One owed him five hundred denarii, and the other fifty. {42} Neither of them had the money to pay him back, so he canceled the debts of both. Now which of them will love him more?” {43} Simon replied, “I suppose the one who had the bigger debt canceled.” “You have judged correctly,” Jesus said. {44} Then he turned toward the woman and said to Simon, “Do you see this woman? I came into your house. You did not give me any water for my feet, but she wet my feet with her tears and wiped them with her hair. {45} You did not give me a kiss, but this woman, from the time I entered, has not stopped kissing my feet. {46} You did not put oil on my head, but she has poured perfume on my feet. {47} Therefore, I tell you, her many sins have been forgiven–for she loved much. But he who has been forgiven little loves little.” {48} Then Jesus said to her, “Your sins are forgiven.” {49} The other guests began to say among themselves, “Who is this who even forgives sins?” {50} Jesus said to the woman, “Your faith has saved you; go in peace.”

How aware are we of our sins?

(Luke 7:41-43) “Two men owed money to a certain moneylender. One owed him five hundred denarii, and the other fifty. {42} Neither of them had the money to pay him back, so he canceled the debts of both. Now which of them will love him more?” {43} Simon replied, “I suppose the one who had the bigger debt canceled.” “You have judged correctly,” Jesus said.

If we are aware that God has forgiven our sins, we will surely be grateful and love Him. The two debtors in the story knew that the creditor took a big loss to forgive their debt. As a result they were grateful. That is precisely the why the sinning woman behaved the way she did. She understood God’s forgiveness for her and could express her gratitude for someone who had forgiven her. The way she showed her gratitude was not just to express her love but also to give to God something that was valuable to her – the costly perfume. We can do the same thing today. God has forgiven us. What valuable thing do we have to give to God to show our gratefulness – our money, talents, time?

Contrast this to Simon the Pharisee. He had no such emotion. Simon did not even extend to Jesus the common courtesies of the home – the kiss of welcome, water for His feet and oil for His head. Simon was living in sin and did not even know it. His behavior towards the Lord betrayed this condition. The problem with the Pharisee is that of self pride. This is so typical of a Pharisee as well as many of us today. Elsewhere Jesus told of a similar story of a Pharisee who was too proud to see his own sin.

(Luke 18:11-13) The Pharisee stood up and prayed about himself: ‘God, I thank you that I am not like other men–robbers, evildoers, adulterers–or even like this tax collector. {12} I fast twice a week and give a tenth of all I get.’ {13} “But the tax collector stood at a distance. He would not even look up to heaven, but beat his breast and said, ‘God, have mercy on me, a sinner.’

2. Are we critical of others’ sins/mistakes?

Another condition that showed Simon’s lack of awareness for his own sins is his tendency to judge others. He despised the sinful woman. A person who truly realizes his own sinful condition and how God has forgiven him cannot possibly despise another. It is unthinkable that each debtor in the parable would despise the other for owing money but being unable to pay.

How can we be more aware of our sin?

Interestingly, it is the people who walked closest to the Lord who saw their sinfulness as the greatest and realized their own inadequacies.

Abraham considered himself “but dust and ashes” (Gen 18:27)

Peter fell to his knees and begged the Lord, “Depart from me, for I am a sinful man” (Luke 5:8)

The greatest of all apostles, Paul, called himself the chief of sinners (1 Tim 1:15).

Jesus tells us that we need both the Word of God and the Holy Spirit to convict us of sin.

(John 16:7-8) But I tell you the truth: It is for your good that I am going away. Unless I go away, the Counselor will not come to you; but if I go, I will send him to you. {8} When he comes, he will convict the world of guilt in regard to sin and righteousness and judgment:

That is why for us to be aware of our sin, we must first spend time reading the Bible. Then we have to ask the Holy Spirit to convict us of sin. We do so when we pray. David showed us a fine example of that.

Very often when we pray, we only come to God with our requests. Don’t forget to come to God in repentance as well. One way I find helpful to remind me to repent during prayer time is this acronym.

Praise and thank Him

Repent for your sins

Ask God for blessings on others

Yourself – Pray for yourself

Many people just come to God with a list of personal requests during prayer. If they have any time left, they spend the last few seconds thanking Him. The priority is all wrong. That’s not PRAYing, that’s YARPing!

Very often when we pray, we do all the talking. Nobody would make a phone call to a friend, do all the talking and hang up. But we do that in prayer. We need to give God time to talk to us. And God talks to us not only when we read the Bible. Jesus says that the Holy Spirit will convict us of sin. When we pray, ask God to point out our sins, like David did, and give Him time to talk!

How to receive forgiveness of our sins.

(Titus 3:5) he saved us, not because of righteous things we had done, but because of his mercy. He saved us through the washing of rebirth and renewal by the Holy Spirit,

(1 John 1:9) If we confess our sins, he is faithful and just and will forgive us our sins and purify us from all unrighteousness.

That does not mean that forgiveness costs nothing. On the contrary, it costs God everything. In the parable of the debtors, the creditor took a huge loss. On the cross, God the Father took an infinitely bigger lost when He offered as a sacrifice His only Son. Jesus suffered infinite loss when he forsook heavenly glories to come down to earth as a man. (Phil 2:6)

That is the infinitely high price of forgiveness. Do not think that we are capable of paying that price with our meager acts of penance.

Forgiveness is certain and it has to be received by faith

The sinful woman believed that Jesus would forgive and He did. She believed that Jesus had forgiven her because Jesus declared in no uncertain terms that she had been forgiven. When Jesus forgave her sin, all she had were the words of Jesus. There were no thunder and lightning. She did not see a vision in the sky. Forgiveness of sin is received by faith in Jesus’ promise to do so.

Living in guilt is like living in a prison. If one day the prison warden comes to us, opens the prison door and goes away, telling us we are free to leave that prison, as long as we do not believe that we are free, we will not be free. We continue to remain inside thinking that the prison warden is trying to trick us.

The forgiveness that Jesus extended to her was certain. Jesus gave her that assurance before she left. Suppose this woman had depended on her own feelings for assurance. After a few hours, she may begin to doubt if she really had been forgiven. If the woman had based her assurance on the attitudes of the people, she would have had very little assurance that she was indeed forgiven. The guest shunned her and Simon despised her.

(Luke 7:37-38) When a woman who had lived a sinful life in that town learned that Jesus was eating at the Pharisee’s house, she brought an alabaster jar of perfume, {38} and as she stood behind him at his feet weeping, she began to wet his feet with her tears. Then she wiped them with her hair, kissed them and poured perfume on them.

Very likely that woman was a prostitute. The fact that she anointed Jesus’ feet with perfume is significant. A prostitute needs perfume in her trade. Those days people do not have the convenience to bathe as often as they like and they don’t have soaps. One way a prostitute keeps herself desirable to men would be through means such as perfume. But she gave all that up for Jesus. She used all her perfume on Jesus’ feet. She would have none left to go back to her old sinful profession. Burning bridges to sin is one sure indication of true repentance.