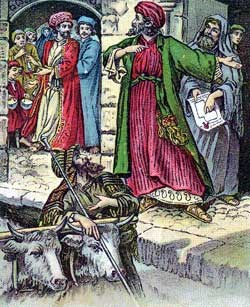 (Luke 14:16-24 NIV) Jesus replied: “A certain man was preparing a great banquet and invited many guests. {17} At the time of the banquet he sent his servant to tell those who had been invited, ‘Come, for everything is now ready.’ {18} “But they all alike began to make excuses. The first said, ‘I have just bought a field, and I must go and see it. Please excuse me.’ {19} “Another said, ‘I have just bought five yoke of oxen, and I’m on my way to try them out. Please excuse me.’ {20} “Still another said, ‘I just got married, so I can’t come.’ {21} “The servant came back and reported this to his master. Then the owner of the house became angry and ordered his servant, ‘Go out quickly into the streets and alleys of the town and bring in the poor, the crippled, the blind and the lame.’ {22} “‘Sir,’ the servant said, ‘what you ordered has been done, but there is still room.’ {23} “Then the master told his servant, ‘Go out to the roads and country lanes and make them come in, so that my house will be full. {24} I tell you, not one of those men who were invited will get a taste of my banquet.'”

Explanation of the parable

I believe this invitation to a banquet is symbolical of the invitation to eternal life through the gospel message. Jesus uses the figure of the banquet to illustrate the “feast in the kingdom of God” (v. 15)–the so-called eschatological banquet.

(Luke 13:29 NIV) People will come from east and west and north and south, and will take their places at the feast in the kingdom of God.

What are we doing to invite people into God’s kingdom?

The host of the party took great efforts to invite people to his banquet. I am sure it would cost him a lot of money to prepare such a lavish meal. It also takes a lot of time. In those days, it is customary to send out invitations twice. The first time to invite them to come and the second time to tell them the banquet is ready since it would take so long to prepare, and people had no watches.

If we want to invite people into God’s feast in heaven, we must be prepared to incur some costs. Paul stood out as someone who paid a high price so that the gospel could be preached.

Are we excluding some people from the gospel?

“A certain man was preparing a great banquet and invited many guests.”

Yet the guests he invited are all well-to-do people. It is common in those days to throw a banquet and invite people who are likely to invite you back. The original invitation was not extended to people who were not in the host’s circle of friends.

While we may criticize the host for his actions, many of us in present day are guilty of the same thing. We are only willing to reach out to certain groups of people. This may be natural because in lifestyle evangelism, the people we are associating with are those naturally in our circle. But are we completely closed to other people? Are we concerned about the salvation of the janitor and if God gives us the opportunity, would we use it? Are we concerned about the salvation of the cab driver and if he is interested, would we tell him the gospel?

People reject the gospel with many excuses.

The excuses are weak. One man “must” go to see a purchased field he probably had seen before he bought it. The second excuse (v. 19) is as worthless as the first; would anyone have bought oxen without examining them? Going “to try them out” sounds like preoccupation with a new possession rather than urgent business. The third excuse (v. 20) has more validity in the light of Deuteronomy 24:5. Yet it is a question of priorities. There is nothing that can prevent the newly married man to attend the banquet.

This brings up an interesting point. When people reject the gospel, they give you excuses. These excuses may not be the genuine reasons. The people in the parable who were invited were probably just not interested in going to the banquet. They may think it is going to be boring. Yet they can’t possibly tell that to the host’s servant! Therefore they came up with all kinds of excuses.

Similarly when we present the gospel to people, and they tell us why they would not believe, how many of these are genuine reasons and how many are just plain excuses. I have seen many books teaching you to counter these reasons. But they are totally ineffective unless they are genuine reasons. Recently I learnt that apologetical arguments are only effective if the matter discussed is a genuine obstacle to that person receiving salvation. In other words, if that person is really searching for God but is not convinced that Jesus is God, if you can convince him, you would have won him for the Lord. But take another person who is not willing to accept that God exists because he wants to carry on with the sinful lifestyle that he enjoys. To make himself feel better, he reads books that will convince himself that God does not exist. For this type of person, no amount of apologetical argument will work. Because they will fall on deaf ears. He would have pre-decided not to accept anything you say. That is why many atheists are angry with God. Angry with a god whom they believe don’t even exist?

Are we presenting the gospel as a feast or as a funeral?

The gospel has always been presented as a happy event, a free gift. In this parable, it is likened to a feast. At other times the gospel is described as a hidden treasure or pearl of great price. Are we presenting the gospel in the same way Jesus did? Are we telling unbelievers that being a Christian involves going to church, serving in various capacities in church, doing street evangelism and fasting? Or do we come up with a list of “thou-shall-nots”? These things are not essential when it comes to salvation. Such things come naturally when a true convert grows in the Lord. He will naturally want to do it when his love for God increases.