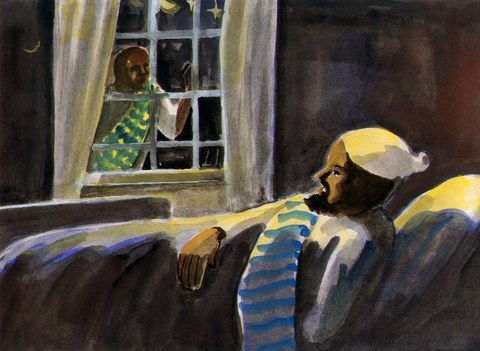 (Luke 11:5-13) And he said to them, “Suppose one of you has a friend, and you go to him at midnight and say to him, ‘Friend, lend me three loaves of bread; {6} for a friend of mine has arrived, and I have nothing to set before him.’ {7} And he answers from within, ‘Do not bother me; the door has already been locked, and my children are with me in bed; I cannot get up and give you anything.’ {8} I tell you, even though he will not get up and give him anything because he is his friend, at least because of his persistence he will get up and give him whatever he needs. {9} “So I say to you, Ask, and it will be given you; search, and you will find; knock, and the door will be opened for you. {10} For everyone who asks receives, and everyone who searches finds, and for everyone who knocks, the door will be opened. {11} Is there anyone among you who, if your child asks for a fish, will give a snake instead of a fish? {12} Or if the child asks for an egg, will give a scorpion? {13} If you then, who are evil, know how to give good gifts to your children, how much more will the heavenly Father give the Holy Spirit to those who ask him!”

Our heavenly Father loves to meet our needs.

If we look at another parable, we will have no doubt that Jesus is contrasting and not comparing the heavenly Father with the character in the parable.

(Luke 18:1-8) Then Jesus told them a parable about their need to pray always and not to lose heart. {2} He said, “In a certain city there was a judge who neither feared God nor had respect for people. {3} In that city there was a widow who kept coming to him and saying, ‘Grant me justice against my opponent.’ {4} For a while he refused; but later he said to himself, ‘Though I have no fear of God and no respect for anyone, {5} yet because this widow keeps bothering me, I will grant her justice, so that she may not wear me out by continually coming.'” {6} And the Lord said, “Listen to what the unjust judge says. {7} And will not God grant justice to his chosen ones who cry to him day and night? Will he delay long in helping them? {8} I tell you, he will quickly grant justice to them.

Do we feel that God does not like to answer our prayers and has to be shaken out of His reluctance by our persistent prayers? This is not so. Verse 13 is clear that God wants to give us good things.

Do you feel ashamed to ask God for certain things because they are not “spiritual” things? For example, do you feel shy to ask God for a life partner? Some people feel that God does not like to be bothered with our request and therefore would “waste” His time only with the major and spiritual things. These people are shy to present requests that they consider trivial. If you feel this way, please change your attitude today. Write down all those things you have been shy to ask God for and start asking for them.

Persistence does not always get us what we ask for

The reluctant friend can be persuaded to give in with the friend’s persistence. Yet our heavenly Father is different. He loves us so much He will not let Himself be persuaded to give in to us if He knows that what we request for is not good for ourselves. Jesus said that even earthly fathers will only give good things to their children — they will not give snakes or scorpions. Likewise, the heavenly Father will not give us something if it is not good for us.

Therefore, when we are walking in God’s will and persistently praying for something but still have not received, one probable reason would be that what we have asked for is not good. Do we feel resentful when we ask for a long time for something but have not received? Thank God that He screens through our requests and gives us only the good ones. Think of the possible reasons why God may be withholding that thing from us. Through our own consideration, we may come up with the reasons why that thing may not be good for us.

Why persistence in prayer is important?

Even though God wants to quickly give us good things, we are not living in a perfect world. There are evil spirits who will hinder the work of God and that is one reason why persistence is important. The story of Daniel will demonstrate this. Daniel had been praying for a long time and still not receive an answer to his prayers. One day, an angel visited him to tell him that his prayers was heard from the very first day, but God’s help was delayed because of the work of the evil spirits (here described as the Prince of Persia).

(Dan 10:12-13) Then he continued, “Do not be afraid, Daniel. Since the first day that you set your mind to gain understanding and to humble yourself before your God, your words were heard, and I have come in response to them. {13} But the prince of the Persian kingdom resisted me twenty-one days. Then Michael, one of the chief princes, came to help me, because I was detained there with the king of Persia.

What would happen if Daniel had stopped praying after 7 days? His prayers would not have been answered. We may have asked for something for a long time. If we give up now, everything may be wasted. Its like Daniel stopping his prayer after 20 days. Is there something you use to pray for but have stopped asking for it because you did not receive answers for a long time. Determine today that you will start praying again and not stop until our prayers are answered.