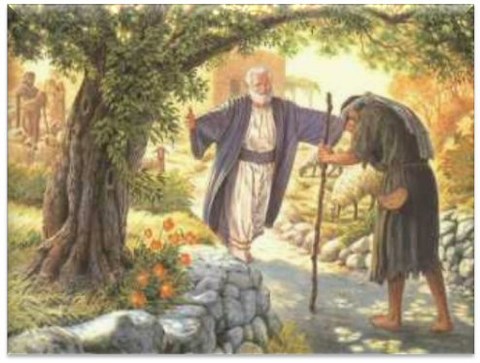 Our heavenly father never gives up on us.

The son had committed a terrible sin. He asked for his father’s inheritance while his father was still alive! That was unheard of in those days. Jesus’ audience must have been shocked. It is as good as the son saying to the father that he wished he was dead so that he could have the inheritance now!

His father must also have been terribly hurt when the son wants to take the money and go to a faraway place. Imagine our children whom we deeply love tell us that they want nothing to do with the parents anymore. They want the parents out of their lives. Imagine how hurt the parents would be.

We may not do what this prodigal son has done. Yet every time we insist on our own way, we are hurting God. We are telling Him that we don’t want Him to meddle with our lives. Sin hurts God the same way the son hurt the father.

Against this backdrop of the hurt that the father must have felt is a magnificent display of the father’s love.

Firstly, we note that the father never gives up on us. We may dwell in sin for years but God is still hoping and waiting for us to come back. Unlike the father, we are quick to give up on others and declare them to be hopeless. Peter expressed this tendency that we all have when he asked God how many times he should extend forgiveness to someone.

(Matthew 18:21-22 NIV) Then Peter came to Jesus and asked, “Lord, how many times shall I forgive my brother when he sins against me? Up to seven times?” {22} Jesus answered, “I tell you, not seven times, but seventy-seven times.

So unlike us, God is always expectant and hoping that we will come back to Him. He does not give up on us. The first thing we note about the father is that he saw his son while he was still a long way off. In other words, the father waits at the window patiently every day, hoping that the son would return.

Our heavenly father is filled with compassion for sinners.

Even though the son has hurt him so much, the father still cares for him. And the father had compassion when he saw his son in that state. When we see someone who has hurt us suffer himself, do we not feel like rejoicing?

Do we have compassion for people who have sinned against God or do we despise them? If we want to bring people back to God, one of the most important thing is compassion. Jesus had compassion even on the prostitutes, who are considered outcast in those days.

(John 8:4-11 NIV) and said to Jesus, “Teacher, this woman was caught in the act of adultery. {5} In the Law Moses commanded us to stone such women. Now what do you say?” {6} They were using this question as a trap, in order to have a basis for accusing him. But Jesus bent down and started to write on the ground with his finger. {7} When they kept on questioning him, he straightened up and said to them, “If any one of you is without sin, let him be the first to throw a stone at her.” {8} Again he stooped down and wrote on the ground. {9} At this, those who heard began to go away one at a time, the older ones first, until only Jesus was left, with the woman still standing there. {10} Jesus straightened up and asked her, “Woman, where are they? Has no one condemned you?” {11} “No one, sir,” she said. “Then neither do I condemn you,” Jesus declared. “Go now and leave your life of sin.”

And because Jesus had compassion, sinners flocked to Him. Tax collectors readily give up their profit and life of sin. Prostitutes openly wept and showed their gratitude to Jesus. Would anyone approach a Christian who does not have compassion? The Pharisees, who were the religious leaders of that day, were quick to condemn sinners. Because of that it is not surprising that not one incident was recorded that a sinner would go to them to ask them for spiritual guidance.

People without compassion on others are demonstrating spiritual pride. We think we are better than others. We are like that Pharisee in the temple who thanked God that he is different from that sinner beside him. (Luke 18:11-14) And Jesus had harsher words against spiritual pride than against sexual immorality!

Do we have compassion on people who had sinned against us? The father had compassion on the son, the same person who deeply hurt him. Jesus had compassion and prayed for the forgiveness of the people who crucified him as well as those who cheered them on. In the same way, the Bible tells us to bless our enemies and pray for them.

Our heavenly father makes the first move to bring sinners to Himself.

When the father saw the son, he ran to him. Wouldn’t it be more natural for him to sit back and wait for the son to beg for forgiveness? But he went first to the son, and he even ran! He forgot all his pride. This reminds me of the love of our heavenly father.

(Romans 5:8 NIV) But God demonstrates his own love for us in this: While we were still sinners, Christ died for us.

There may be someone who had sinned against you. Are you willing to follow the example of the father and make the first move to restore the relationship?

Our heavenly father does not mind our filth.

We were told the son was so desperate he even had to feed the pigs. How dirty he must be, to not only feed the pigs, but also to eat the same thing the pigs ate. Not only that, in those days, pigs are unclean animals and no Jew is allowed to touch them. But the son actually works as a feeder of pigs. How spiritual unclean he must be, in addition to being physically unclean.

But the father threw his arms round the son and kissed him. Can you imagine that? I often tell myself I do not have a problem working with sinners but please don’t come so close. That is spiritual pride. I forgot how much I must smell and how much filth I have but God still hugged me. The Bible tells us that compared to the absolutely holy God, our righteous acts are like filthy rags. (Isaiah 64:6) If our righteous acts are like filthy rags, can you imagine what our sin would be? But God does not mind the filth. He associated with sinners at close range. He sat and ate with them.

Are we keeping our distance with sinners? Do we only want to associate with normal God-fearing Christians? Do sinners find us approachable?

Do we feel that our sin is so great God cannot possibly want to have anything to do with us? The best answer came from Jesus himself.

(Luke 5:31-32 NIV) Jesus answered them, “It is not the healthy who need a doctor, but the sick. {32} I have not come to call the righteous, but sinners to repentance.”

This parable is an excellent illustration of the grace of our heavenly Father. The sinful son had done nothing to deserve his father’s forgiveness. He thought he needed to “work” in order to be accepted into his father’s household. And even then only as one of his servants.

Yet the father had something totally different in mind. He was willing to accept him as a son even before he had done anything to make amends. The simple act of acknowledging his fault and wanting to go back to the father was all that was necessary.

We sometimes think that we have to work for our salvation in order to be accepted by God. This parable teaches us that this is not true. God accepts us if we are willing to go to Him. He does not demand that we do works of penance before He is willing to forgive us.

Our heavenly father wants to restore whatever we have lost because of sin.

The son lost everything he had because of his sin. But when the father forgives, he also wants to restore the son to the same condition. He ordered the servants to put the best robe on him and a ring on his finger and scandal on his feet. The same truth is taught in the Old Testament.

(Joel 2:25 NIV) ‘I will repay you for the years the locusts have eaten– the great locust and the young locust, the other locusts and the locust swarm — my great army that I sent among you.

Have we lost anything because of sin? Ask God to restore to you whatever you have lost to sin.