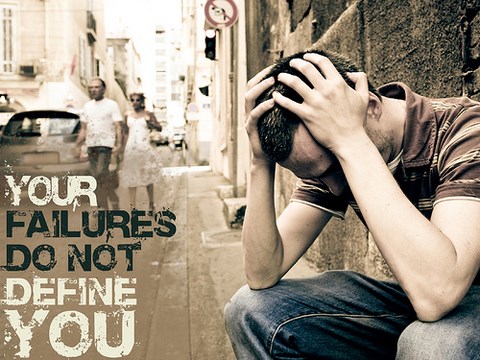 God Himself was accustomed to failure

When Jesus learned His earthly father’s trade as a carpenter, surely He did not always produce the perfect product at the first attempt. He probably learnt many things by trial and error.

Even after three years of ministry, Jesus failed to win everyone He preached to and many left Him and followed Him no more.

From a human standpoint, Jesus’ death on the cross is a complete and utter failure. But from God’s standpoint, that is the basis of His success of victory for mankind over the dominion of Satan.

Persevere despite seeming failure and look towards victory

(Heb 12:2 NIV)  Let us fix our eyes on Jesus, the author and perfecter of our faith, who for the joy set before him endured the cross, scorning its shame, and sat down at the right hand of the throne of God.

Jesus was not bothered by what others see as failure and shame. He scorned the shame. That means He looked down on it and considered it not worth wasting His time on.

Learn whatever you can from the failure

God may have allowed the failure to come into our life so that we learn valuable lessons. If we do not contemplate on why we fail, we may never learn the lessons and the failure has to be repeated.

Do not look for things to blame your failure on

Research has shown that the more a victim blames another person or factor for some tragedy or failure, the less likely he is to cope.

Passing the blame is a natural reaction that surfaced with the very first humans. Eve blamed the serpent and Adam blamed Eve.

The American comedian Flip Wilson coined the much quoted line: “The devil made me do it.”

The next time you fail, resist the thought that it was due to factors outside your control. Rather look for ways you could have prevented it.