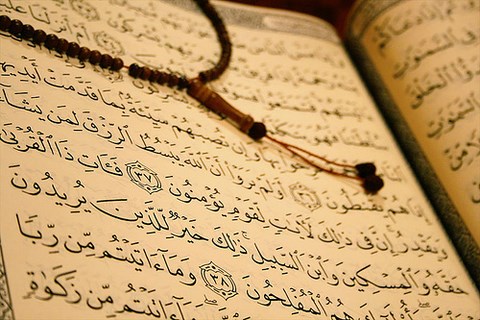 How did the Quran come about?

Muslims believe the Quran has not been corrupted or changed. They believe that not a word has been lost or altered since it was received by the Prophet over fourteen hundred years ago.

The quran is believed by Sunnis (though not by Shi’is) to be the eternal, uncreated word of God, inscribed on the Preserved Tablets in heaven. The source of this belief is found in the quran itself:

21. Nay this is a Glorious quran

This Preserved Tablet is believed to eternally exists in Paradise.

4. And verily it is in the Mother of the Book in Our Presence high (in) full of wisdom.

Dialog: Why is there another object that is not God but is also eternal like God?

(John 1:14 NIV)  The Word became flesh and made his dwelling among us. We have seen his glory, the glory of the One and Only, who came from the Father, full of grace and truth.

The Quran also teaches that the eternal Quran, which was in the Presence of God, came down to man on a particular night. (Muslims call this the Night of Power.)

Surah 17:105. We sent down the (Qur’an) in Truth, and in Truth has it descended: and We sent thee but to give Glad Tidings and to warn (sinners).

Jesus emphasized that he did not start to exist when he was born; he existed even before Abraham was born.

Jesus also declared that He came from above i.e. He descended on earth.

(John 3:13 NIV)  No one has ever gone into heaven except the one who came from heaven–the Son of Man.

Why are you convinced the Quran is God’s word?

Many Muslims believe that the Quran has to be God’s word because it is the most beautiful piece of literature.

Dialog: Do you understand the Arabic of the Quran so that you know it is the most beautiful piece of literature?

It is a fact that most Muslims recite certain fixed portions of the Quran and do not understand the Arabic in most parts of the Quran.

Dialog: If someone produces a beautiful piece of work and wants you to believe that because it is so beautiful it has to be the work of God, would you believe him?

For example, the Persian founder of the Manichaens Mani claimed that men should believe in him as the Helper that Jesus promised in John 14 because he produced a book called Artand, which is full of beautiful pictures. He claimed that the book had been given by God because no human being could paint pictures equal in beauty to those contained in the Artand, therefore it had to come from God Himself. Yet no Muslim would accept his claim.

Recitation of the Quran

Unlike the Bible, which Christians generally read in their own languages to discover its message, the Muslim finds merit just in reciting the quran in its original Arabic even if he does not fully understand what he is reading.

Surah 33:34. And recite what is rehearsed to you in your homes, of the Signs of Allah and His Wisdom: for Allah understands the finest mysteries and is well-acquainted (with them).

Even the manner of recitation is important to Muslims and competitions are held to see who can recite in the best manner.

Dialog: Christians do not recite the Bible. The Bible is not to be recited but studied to gather information valuable for daily life.

(2 Tim 3:16 NIV)  All Scripture is God-breathed and is useful for teaching, rebuking, correcting and training in righteousness…

Extenal cleansing and the Quran

A Muslim must cleanse his private parts after urination or bowel movements, using clean, running water. Without performing this, he cannot perform his prayers. Nor can he recite or carry the Quran.

033.021 YUSUFALI: Ye have indeed in the Messenger of Allah a beautiful pattern (of conduct) for any one whose hope is in Allah and the Final Day, and who engages much in the Praise of Allah.

The actions, deeds and sayings of the Prophet are primarily recorded in the hadiths.

The commandment (Exo 20:15 NIV)  “You shall not steal. Stealing dignity In Acts 19, we read that when Paul went to Ephesus and preached there, many turned away from the

What authority do we haveAuthority over evil spirits Spiritual warfare must be conducted from a position of victory. In other words, we claim the victory that Christ has already won