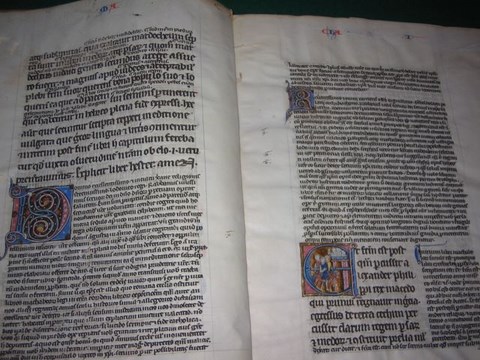 In 2 Machabees, we have the reference cited by the Catholic Church to support Purgatory.

12:43 And when he had made a gathering throughout the company to the sum of two thousand drachms of silver, he sent it to Jerusalem to offer a sin offering, doing therein very well and honestly, in that he was mindful of the resurrection: 12:44 For if he had not hoped that they that were slain should have risen again, it had been superfluous and vain to pray for the dead. 12:45 And also in that he perceived that there was great favour laid up for those that died godly, it was an holy and good thought. Whereupon he made a reconciliation for the dead, that they might be delivered from sin.

Protestants do not believe that living Christians should pray for the dead.

If one would read a few verses earlier in 2 Machabees 12, he would learn that God killed these people because of idolatry.

12:39 And upon the day following, as the use had been, Judas and his company came to take up the bodies of them that were slain, and to bury them with their kinsmen in their fathers’ graves. 12:40 Now under the coats of every one that was slain they found things consecrated to the idols of the Jamnites, which is forbidden the Jews by the law. Then every man saw that this was the cause wherefore they were slain.

According to Catholicism, if you die in the state of mortal sin, which idolatry is, you’ll go straight to hell when you die. Therefore, according to Catholic doctrine, Judas Machabees was WRONG in suggesting that the people should “pray for the dead, that they may be loosed from sins” (verse 46).

For this reason, even Catholics should not attribute authenticity to the book of Machabees as it contradicts their own doctrines.

Idolatry is classified as motal sin by Catholics. According to the Catechism of the Catholic Church, “Sins are rightly evaluated according to their gravity. The distinction between mortal and venial sin, already evident in Scripture, became part of the tradition of the Church. For a sin to be mortal, three conditions must together be met: “Mortal sin is sin whose object is grave matter and which is also committed with full knowledge and deliberate consent.” Grave matter is specified by the Ten Commandments.”

The consequences of mortal sins are also spelled out by the Catechism.

“Mortal sin is a radical possibility of human freedom, as is love itself. It results in the loss of charity and the privation of sanctifying grace, that is, of the state of grace. If it is not redeemed by repentance and God’s forgiveness, it causes exclusion from Christ’s kingdom and the eternal death of hell, for our freedom has the power to make choices for ever, with no turning back.”

God Himself was accustomed to failure When Jesus learned His earthly father’s trade as a carpenter, surely He did not always produce the perfect product at the first attempt. He

Shahadah is a declaration of faith and trust that professes that there is only one God (Allah) and that Muhammad is God’s messenger. This is normally recited in Arabic: ‘La ‘ilea-ha