God-allowed barrenness is usually temporary and seasonal; it has a set time to be broken. However, there are other types of barrenness that do not come from God. These may be due to Satanic harassment or human failure. These types of barrenness will be remedied as soon as the cause is found and corrected.

The following passage records the story of King David worshipping before the Lord when he brought the Ark of the Covenant back to Israel. Michal, daughter of Saul and David’s first wife, despised him for acting in such an undignified manner.

(2 Sam 6:14-16 NIV)  David, wearing a linen ephod, danced before the LORD with all his might, {15} while he and the entire house of Israel brought up the ark of the LORD with shouts and the sound of trumpets. {16} As the ark of the LORD was entering the City of David, Michal daughter of Saul watched from a window. And when she saw King David leaping and dancing before the LORD, she despised him in her heart.

(2 Sam 6:20-23 NIV)  When David returned home to bless his household, Michal daughter of Saul came out to meet him and said, “How the king of Israel has distinguished himself today, disrobing in the sight of the slave girls of his servants as any vulgar fellow would!” {21} David said to Michal, “It was before the LORD, who chose me rather than your father or anyone from his house when he appointed me ruler over the Lord’s people Israel–I will celebrate before the LORD. {22} I will become even more undignified than this, and I will be humiliated in my own eyes. But by these slave girls you spoke of, I will be held in honor.” {23} And Michal daughter of Saul had no children to the day of her death.

Michal was barren to the day of her death because she did not repent of her sin. She was guilty of despising what God esteems.

​Below: King David danced for joy before the Lord 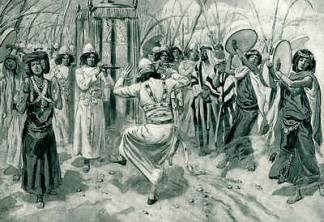