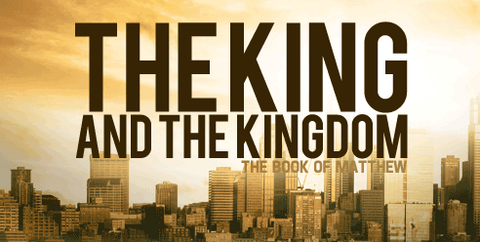 The book of Matthew was written by Matthew, one of the twelve disciples of Jesus. Matthew was a tax collector before Jesus called him to be one of His disciples. The central message of Matthew’s gospel was about Jesus the King. The words “kingdom of heaven” are mentioned 33 times in this book.

The gospel starts with magi from the east coming to Jerusalem to look for Jesus the King.

Matt 2:2 After Jesus was born in Bethlehem in Judea, during the time of King Herod, Magi from the east came to Jerusalem 2 and asked, “Where is the one who has been born king of the Jews?

The gospel also contains many of Jesus’ teachings about the kingdom of heaven. For example…

Matt 13:24 Jesus told them another parable: “The kingdom of heaven is like a man who sowed good seed in his field.
Jesus was also portrayed as the King riding on a donkey into Jerusalem on Palm Sunday. In those days generals ride on horses to war while kings ride on donkeys.

Matt 21 As they approached Jerusalem and came to Bethphage on the Mount of Olives, Jesus sent two disciples, 2 saying to them, “Go to the village ahead of you, and at once you will find a donkey tied there, with her colt by her. Untie them and bring them to me. 3 If anyone says anything to you, say that the Lord needs them, and he will send them right away.” 4 This took place to fulfill what was spoken through the prophet: 5 “Say to Daughter Zion, ‘See, your king comes to you, gentle and riding on a donkey, and on a colt, the foal of a donkey.’”

The King deserves our worship

Matt 2 After Jesus was born in Bethlehem in Judea, during the time of King Herod, Magi from the east came to Jerusalem 2 and asked, “Where is the one who has been born king of the Jews? We saw his star when it rose and have come to worship him.”

The King deserves our best gifts

Matt 2:11 On coming to the house, they saw the child with his mother Mary, and they bowed down and worshiped him. Then they opened their treasures and presented him with gifts of gold, frankincense and myrrh.

The wise men not only worshipped Jesus; they presented Him with gifts. It is customary when we meet royalties and dignitaries to present them with gifts. What are we offering to Jesus our King?

The wise men gave to Jesus what was extremely valuable. Likewise we don’t give to our King the leftovers. He deserves our best. For example, we don’t leave time for spending with God only when we have finished other tasks and are exhausted. We give to God the time of the day when we are fresh. When we offering our money to God, it should not be our “small change”. We give an amount that is valuable to us. We could also present and surrender to God other things that are precious to us – our talents, our career, etc. By doing so we are telling God that He has the right to do whatever He pleases with them.

The King needs to be obeyed

Matthew 4:17 From that time on Jesus began to preach, “Repent, for the kingdom of heaven has come near.” 18 As Jesus was walking beside the Sea of Galilee, he saw two brothers, Simon called Peter and his brother Andrew. They were casting a net into the lake, for they were fishermen. 19 “Come, follow me,” Jesus said, “and I will send you out to fish for people.” 20 At once they left their nets and followed him.

Matt 6:10 your kingdom come, your will be done, on earth as it is in heaven.

Because God and Jesus is the King, it is only right that their will be done. This is always so in heaven but on earth man has chosen to rebel against God and His will is not always done. When Jesus came to earth, He brought about the kingdom of heaven and the rule and reign of God on earth. God’s will was done and the devil defeated in many instances.

Is the King calling you to do something?

The King needs to be served

Jesus gave us the parable of the talents to teach us that the King needs to be served.

God has entrusted us with things in life – time, skills, money – and we are to multiply them for His purpose. They are not be be used for our own purposes only, yielding no return for our Master.

everyone has sinned against God (Romans 3:23) for all have sinned and fall short of the glory of God.​ Sin causes us to be separated from God ​The Bible refers