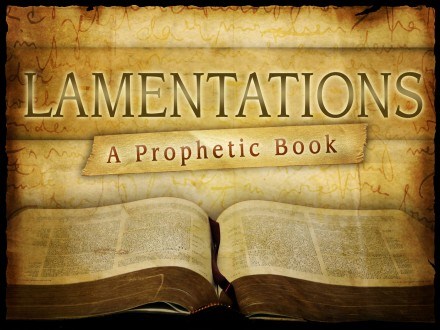 Jeremiah was watching his city Jerusalem burn and it broke his heart. Even though he knew that the city was destroyed because of the sins of the people, yet he felt great despair. It was in the depths of this despair that he wrote the book of Lamentations. Jeremiah did not just lament over the fate of his city. He interceded for them. This book is also about Jeremiah interceding for his city before God. What can we learn from Jeremiah’s intercession?

The book consists of five separate poems. In the first (chapter 1), the city sits as a desolate weeping widow overcome with miseries. In chapter 2 these miseries are described in connection with national sins and acts of God. Chapter 3 speaks of hope for the people of God: the chastisement would only be for their good; a better day would dawn for them. Chapter 4 laments the ruin and desolation of the city and temple, but traces it to the people’s sins. Chapter 5 is a prayer that Zion’s reproach may be taken away in the repentance and recovery of the people. (Source: Wikipedia)

Lamentations 2:11 My eyes fail from weeping, I am in torment within; my heart is poured out on the ground because my people are destroyed, because children and infants faint in the streets of the city.

He hopes in God’s character of mercy and compassion.

Chapter 3
19 I remember my affliction and my wandering, the bitterness and the gall. 20 I well remember them, and my soul is downcast within me. 21 Yet this I call to mind and therefore I have hope: 22 Because of the Lord’s great love we are not consumed, for his compassions never fail. 23 They are new every morning; great is your faithfulness. 24 I say to myself, “The Lord is my portion; therefore I will wait for him.”

In the previous chapter, Jeremiah was depressed that God showed no pity on the city of Jerusalem and His punishments were harsh.

Without pity the Lord has swallowed up all the dwellings of Jacob; in his wrath he has torn down the strongholds of Daughter Judah. He has brought her kingdom and its princes down to the ground in dishonor. (Lamentations 2:2)

Now he realized that while God meted out His just punishments on the city, He is not without compassion and faithfulness. Therefore, it is still worth praying to God and interceding for the city.

Concern for his nation’s sins. Identifies with them.

Jeremiah knew very well that his city was punished due to its sin.

Chapter 4
6 The punishment of my people is greater than that of Sodom, which was overthrown in a moment without a hand turned to help her. 13 But it happened because of the sins of her prophets and the iniquities of her priests, who shed within her the blood of the righteous.

However, instead of judging them, he identifies with them. He acknowledged that “we have sinned.”

The crown has fallen from our head. Woe to us, for we have sinned! (Lamentations 5:16)

This is what we call “identificational repentance” or repenting on behalf of someone we are associated if as if the sin is our own. There is a biblical basis for this.

Lev. 26:39-42–“Those of you who are left will waste away in the lands of their enemies because of their iniquities; also because of their fathers’ iniquities they will waste away. But if they confess their iniquity and the iniquity of their fathers–their treachery against me and their hostility toward me . . . then when their uncircumcised hearts are humbled and they pay for their sin, I will remember my covenant with Jacob . . . and I will remember the land.”

Asking God to restore and renew

5:21 Restore us to yourself, Lord, that we may return; renew our days as of old…
​
Who has gone away from the Lord that we need to intercede for? At the heart of intercession is our asking God to restore and renew relationships. We may have loved ones that do not know God yet or have backslided and drifted from Him. We need to ask God to restore and renew those broken relationships.