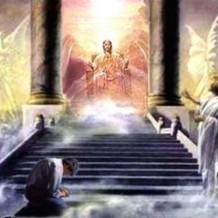 Our God is a just God

Deuteronomy 32:4 (NIV) He is the Rock, his works are perfect, and all his ways are just. A faithful God who does no wrong, upright and just is he.

Isaiah 45:21 (KJV) Tell ye, and bring them near; yea, let them take counsel together: who hath declared this from ancient time? who hath told it from that time? have not I the LORD? and there is no God else beside me; a just (NIV righteous) God and a Saviour; there is none beside me.

The same Hebrew word is sometimes translated righteous or just depending on the version of the Bible. However, both righteous and just sometimes mean the same. When some verses say that God is righteous, it may not be referring to God=s holiness, but rather to the fact that God is right in his dealings (in other words, fair).

What do we mean when we say that God is just?

1. His dealings with men are fair. Everybody gets what he deserves. The upright will be rewarded and the sinner will be punished.

Rom 2:5 But because of your stubbornness and your unrepentant heart, you are storing up wrath against yourself for the day of God’s wrath, when his righteous judgment will be revealed. 6 God “will give to each person according to what he has done.”

Zep 3:5 The LORD within her is righteous (KJV just) ; he does no wrong. Morning by morning he dispenses his justice, and every new day he does not fail, yet the unrighteous know no shame.

Objection : Why are there so many sinful people in the world who are so successful while the righteous ones are afflicted?

Jer 12:1 You are always righteous, O LORD, when I bring a case before you. Yet I would speak with you about your justice: Why does the way of the wicked prosper? Why do all the faithless live at ease?

Psa 37:35 I have seen a wicked and ruthless man flourishing like a green tree in its native soil, 36 but he soon passed away and was no more; though I looked for him, he could not be found.

Rom 2:4 Or do you show contempt for the riches of his kindness, tolerance and patience, not realizing that God’s kindness leads you toward repentance?

2 Pet 3:9 The Lord is not slow in keeping his promise, as some understand slowness. He is patient with you, not wanting anyone to perish, but everyone to come to repentance.

…..but God=s judgements are unavoidable

1 Kings 22:34 (NIV) But someone drew his bow at random and hit the king of Israel between the sections of his armour. The king told his chariot driver, “Wheel around and get me out of the fighting. I’ve been wounded.”

King Ahab wanted to escape God=s judgement which came in the form of King Aram sending his army to kill him. Ahab disguised himself and even had Aram=s men chase the wrong person. But God=s judgement cannot be foiled. The verse emphasised that a random arrow (one which is not even aiming at him) got him between the sections of the armour (even the armour cannot protect him).

Implications : We do not take matters into our own hands but instead appeal to the Lord for justice

Luke 18:7 (NIV) And will not God bring about justice for his chosen ones, who cry out to him day and night? Will he keep putting them off?

Deu 32:35 It is mine to avenge; I will repay. In due time their foot will slip; their day of disaster is near and their doom rushes upon them.”

Luke 18:7­8 (NIV) And will not God bring about justice for his chosen ones, who cry out to him day and night? Will he keep putting them off? 8 I tell you, he will see that they get justice, and quickly. However, when the Son of Man comes, will he find faith on the earth?”

Prov 29:26 Many seek an audience with a ruler, but it is from the LORD that man gets justice.

Objection : Why does God punish someone for another person=s sin?

Exodus 20:5 (NIV) You shall not bow down to them or worship them; for I, the LORD your God, am a jealous God, punishing the children for the sin of the fathers to the third and fourth generation of those who hate me,

Romans 2:5­6 (NIV) But because of your stubbornness and your unrepentant heart, you are storing up wrath against yourself for the day of God’s wrath, when his righteous judgment will be revealed. 6 God “will give to each person according to what he has done.”

Objection : Why do God allow righteous people to suffer?

Job must have felt that God was very unfair when all those things happened to him despite him being righteous. Yet this is because he did not know the circumstances behind all the trials – that God was testing his faithfulness despite taking away everything from him.

Joseph likewise must have felt very unfair that so many bad things has happened to him. But he was not bitter because he knew that God meant everything for good.

Genesis 45:4­5 (NIV) Then Joseph said to his brothers, “Come close to me.” When they had done so, he said, “I am your brother Joseph, the one you sold into Egypt! 5 And now, do not be distressed and do not be angry with yourselves for selling me here, because it was to save lives that God sent me ahead of you.

Romans 8:28 (NIV) And we know that in all things God works for the good of those who love him, who have been called according to his purpose.

Implications : God Has A Purpose In The Suffering Of The Righteous

Psa 119:75 (KJV) I know, O LORD, that thy judgments are right, and that thou in faithfulness hast afflicted me.

Nehemiah 9:32­33 (NIV) “Now therefore, O our God, the great, mighty and awesome God, who keeps his covenant of love, do not let all this hardship seem trifling in your eyes­­the hardship that has come upon us, upon our kings and leaders, upon our priests and prophets, upon our fathers and all your people, from the days of the kings of Assyria until today. 33 In all that has happened to us, you have been just; you have acted faithfully, while we did wrong.

Therefore, when we are punished by God, we should not be bitter but instead repent and ask God to show us what He wants us to learn from the punishment. God punishes us because He loves us.

Hebrews 12:5­6 (NIV) And you have forgotten that word of encouragement that addresses you as sons: “My son, do not make light of the Lord’s discipline, and do not lose heart when he rebukes you, 6 because the Lord disciplines those he loves, and he punishes everyone he accepts as a son.”

Acts 10:34 (NIV) Then Peter began to speak: “I now realize how true it is that God does not show favouritism

Deuteronomy 10:17 (NIV) For the LORD your God is God of gods and Lord of lords, the great God, mighty and awesome, who shows no partiality and accepts no bribes.

Objection :Did Not God Favour Some People Over Others?

Romans 9:11­13 (NIV) Yet, before the twins were born or had done anything good or bad­­in order that God’s purpose in election might stand: 12 not by works but by him who calls­­she was told, “The older will serve the younger.” 13 Just as it is written: “Jacob I loved, but Esau I hated.”

God=s justice must be understood in the context of His sovereignty. While He is a just God, He is also a sovereign God who has the right to do what He pleases.

Implications : We have to be impartial

Lev 19:15 “‘Do not pervert justice; do not show partiality to the poor or favouritism to the great, but judge your neighbour fairly (same word as just)

Deu 1:17 Do not show partiality in judging; hear both small and great alike. Do not be afraid of any man, for judgment belongs to God. Bring me any case too hard for you, and I will hear it.

Discussion : In what ways have we been partial with people and discriminate certain races, groups of people?

3. God is concerned about justice and fights for the rights of the needy.

Deu 10:18 He doth execute the judgment of the fatherless and widow, and loveth the stranger, in giving him food and raiment. (KJV)

Objection : Why does God allow Ainnocent@ people to suffer?

The Bible tells us that God is of great concern for those who are less fortunate than others, like the widow, poor, afflicted, etc.

Exo 3:7 The LORD said, “I have indeed seen the misery of my people in Egypt. I have heard them crying out because of their slave drivers, and I am concerned about their suffering.

The Bible tells us that God is Himself grieved by the suffering of mankind. But suffering is part of the package that comes with sin. When God created the world, it was good. There was no suffering until man sinned and the first result of sin is that man has to suffer and toil under the sun and women have to suffer the pain of childbirth. Therefore, God has not been unfair in allowing people to suffer. It is all a consequence of sin.

Implications : We have to enforce justice on earth by fighting for the cause of the needy.

Isa 1:17 learn to do right! Seek justice, encourage the oppressed. Defend the cause of the fatherless, plead the case of the widow.

Jer 5:28 They are waxen fat, they shine: yea, they overpass the deeds of the wicked: they judge not the cause, the cause of the fatherless, yet they prosper; and the right of the needy do they not judge.

Isa 45:19 I have not spoken in secret, from somewhere in a land of darkness; I have not said to Jacob’s descendants, ‘Seek me in vain.’ I, the LORD, speak the truth (same word as right, just); I declare what is right.

Gen 30:33 And my honesty will testify for me in the future, whenever you check on the wages you have paid me. Any goat in my possession that is not speckled or spotted, or any lamb that is not dark­coloured, will be considered stolen.”

Prov 16:13 Kings take pleasure in honest lips; they value a man who speaks the truth.

Proverbs 16:11 (NIV) Honest scales and balances are from the LORD; all the weights in the bag are of his making.

Implications : We have to be honest

God, who is a just God, requires that His children be honest.

Deu 25:14 Thou shalt not have in thine house divers measures, a great and a small. 15 But thou shalt have a perfect and just weight, a perfect and just measure shalt thou have: that thy days may be lengthened in the land which the LORD thy God giveth thee.

Discussion : Is there such a thing as white lies?

Heb 11:31 By faith the prostitute Rahab, because she welcomed the spies, was not killed with those who were disobedient.

Food for thought : Sometimes, it is not the act which is wrong but the motive behind the act.

Because God is a just God, He also requires us to be just.

Prov 21:3 To do justice and judgment is more acceptable to the LORD than sacrifice. (KJV)

Deu 16:20 That which is altogether just shalt thou follow, that thou mayest live, and inherit the land which the LORD thy God giveth thee.

Omnipotence of God
Sovereignty of God
Jealousy of God