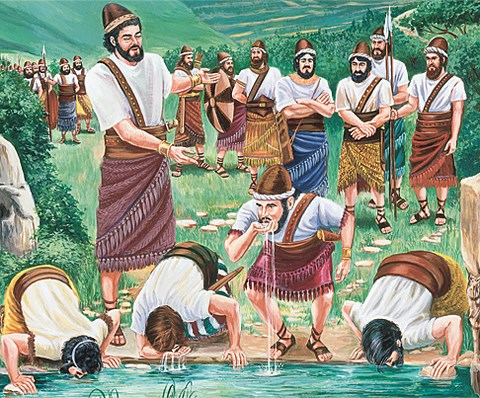 God works so that His glory will be manifested.

Judges 7:2  The Lord said to Gideon, “You have too many warriors with you. If I let all of you fight the Midianites, the Israelites will boast to me that they saved themselves by their own strength. 3  Therefore, tell the people, ‘Whoever is timid or afraid may leave and go home.’” Twenty-two thousand of them went home, leaving only ten thousand who were willing to fight.

If you read on, you will see that God eventually reduced the army to only 300 men, nothing compared to the vast army of the Midianites. And why would God do that? So that His name will be glorified. God works for His own glory. When we serve God, we have to be mindful that we are not doing so for our own glory but God’s.

Are we angry that we are not getting the recognition that we deserve when we do a good job in God’s ministry? If we are, we need to examine our motives.

When God works in our life, are we giving Him the glory. Would you not rather bless someone who is grateful? God values thankfulness in us and we need to give him the glory.

God uses the weak to accomplish His will

In order to show His glory in the situation, God often uses the weak so that no one can boast that he has done so with his own strength. In Gideon’s case, He used only three hundred men – a weak force compared to the army of the Midianites.

Judges 7:4  But the Lord told Gideon, “There are still too many! Bring them down to the spring, and I will sort out who will go with you and who will not.” 5When Gideon took his warriors down to the water, the Lord told him, “Divide the men into two groups. In one group put all those who cup water in their hands and lap it up with their tongues like dogs. In the other group put all those who kneel down and drink with their mouths in the stream.” 6Only three hundred of the men drank from their hands. All the others got down on their knees and drank with their mouths in the stream. 7The Lord told Gideon, “With these three hundred men I will rescue you and give you victory over the Midianites. Send all the others home.” 8So Gideon collected the provisions and rams’ horns of the other warriors and sent them home. But he kept the three hundred men with him.

If God can use a weak army to defeat the mighty Midianites, He can use me to accomplish great tasks. It is His power working in me. Do not be discouraged or afraid to serve God because you are not “properly trained”. David was not properly trained when he defeated Goliath. Neither was the Gideonite army prepared for the Midianite force.

God’s name will be glorified even among His enemies.

Judges 7:12  The armies of Midian, Amalek, and the people of the east had settled in the valley like a swarm of locusts. Their camels were like grains of sand on the seashore—too many to count! 13  Gideon crept up just as a man was telling his friend about a dream. The man said, “I had this dream, and in my dream a loaf of barley bread came tumbling down into the Midianite camp. It hit a tent, turned it over, and knocked it flat!” 14His friend said, “Your dream can mean only one thing—God has given Gideon son of Joash, the Israelite, victory over all the armies united with Midian!”

It would be most unlikely to hear a Midianite giving glory to the Israelites’ God. Yet it happened because God caused His name to be glorified even in enemy circles.

Do you have friends that have nothing good to say about God? Maybe each time they talk about God, they joke and put Him down. Ask God to do a work in them such that they too will give glory to God.

God works in miraculous ways to manifest His glory.

Judges 7:22When the three hundred Israelites blew their horns, the Lord caused the warriors in the camp to fight against each other with their swords. Those who were not killed fled to places as far away as Beth-shittah near Zererah and to the border of Abel-meholah near Tabbath.

What the Israelites could not accomplish, God did it for them with a miracle. God has not stopped performing miracles in our day. He used miracles extensively during the Bible days and will continue to do so to manifest His glory.

Is there a situation wherein God can perform a miracle and give Himself the glory?